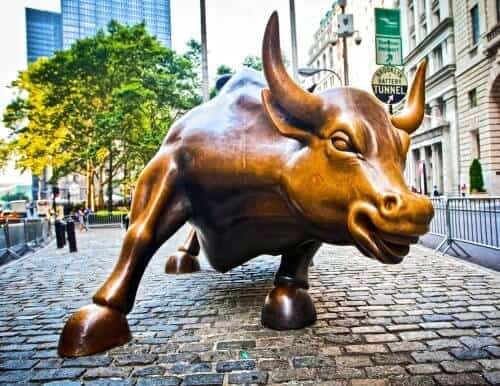 A survey conducted recently by Morgan Stanley’s self-directed trading platform E-trade recently revealed what millionaire investors think about the current state of the stock market, with a large percentage of them responding that they believe we are currently in a bubble.

According to E-trade’s findings, nearly 91% of the respondents, all of which hold $1 million or more in their brokerage accounts with the popular stock trading platform, either think we are nearing bubble territory or that the markets are already in one.

Meanwhile, despite this view, these wealthy investors continue to be optimistic about the future of the stock market, as 64% of those who responded to the survey said they were bullish on the market regardless of the risks associated with investing during a bubble.

Moreover, this risk-on attitude seems to have climbed during the first quarter of the year, as the percentage has gone up 9% compared to the fourth quarter of 2020, while their tolerance for risk has also gone up from 16% during Q4 2020 to 24% amid increased optimism about the prospect a strong economic recovery in the US economy during 2021.

On the other hand, a similar survey conducted by E-trade among investors with $10,000 or more in their brokerage accounts found similar – yet less pronounced – views about the markets, with 66% of the respondents saying that they believe the markets are currently in a bubble – nearly 25% less compared to the survey conducted among the wealthiest portion of the platform’s investors base.

That said, the same bullish attitude persists among these retail investors, with 57% of them responding that they remain net long despite the perception that there is a distortion in the markets at the moment.

According to the survey, a high percentage of wealthy investors are actively modifying their portfolio to respond to the introduction of a vaccine and other interesting virus-related events, favoring the most virus-battered sectors like energy, small caps, and value stocks while progressively taking profits out of the sectors that have benefitted the most during the health emergency.

In this regard, 32% said that they made changes to their portfolio recently, resulting in a 6% increase compared to last quarter’s findings.

Meanwhile, other popular investing themes during the pandemic like the stay-at-home trade remain appealing among high-net-worth individuals, as they believe that some of the changes introduced by the pandemic in the way people live, work, and entertain are here to stay.

On this particular matter, the head of E-Trade’s capital management unit, Mike Loewengart, said: “We can talk a lot about how the stay-at-home trade is over and other segments are poised to do better, but when we see sector expectations being similar, that is also a reflection of the market being tied to tech and the fact that the world has changed as a result of Covid”.

Finally, the wealthiest investors within the platform acknowledged that they see more attractive opportunities overseas, with 36% already taking positions in companies and indexes outside the United States – a number that is 9% higher than the 27% reported during the past quarter.

A scenario of a weaker US dollar and seemingly stretched valuations in the US could continue to favor this particular appetite for foreign instruments, as investors see more upside potential and limited downside risk in countries like Germany and the United Kingdom.