AMC Entertainment’s stock fell over 8% yesterday after the company said that it would seek shareholder approval to increase its authorized share capital.

To be sure, this is not the first time that AMC is seeking to raise capital and has raised almost $2 billion since the pandemic began through a mix of debt and equity issuance.

Earlier this year, AMC raised cash by selling shares at an average price of $3.07 per share which is less than a third of its current price.

Meanwhile, while these capital raises helped AMC survive the short-term pain and avert a bankruptcy, they also come with long-term costs. The debt that the company has raised has to be repaid. This also includes the interest portion that has to be regularly serviced.

Also, after issuing shares generously over the last year, AMC will see a massive earnings dilution once it starts posting profits again. To add to the woes, there is the growing penetration of streaming which looks like a long-term headwind for cinema chains.

AMC Entertainment’s CEO Adam Aron said that the company is cognizant of the dilution post the proposed share issuance. “Dilution is something we care about, but I will say we are formally asking approval from our shareholders to authorize another 500 million new shares that the company could issue if it wishes,” said Aron. He added, “There are a lot of benefits to our shareholders of having more authorized shares out on the market.”

According to Aron, “There are a lot of good reasons for shareholders to give us the authority” referring to the “opportunity to bolster our cash reserves and there’s an opportunity to buy back debt at a discount or pay deferred theater rents.” 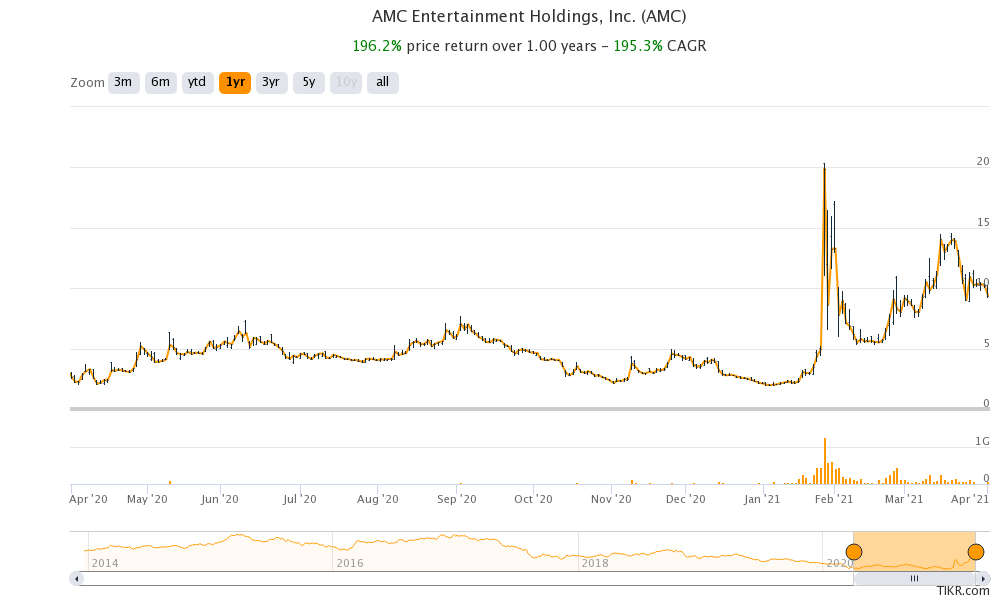 Meanwhile, the markets were clearly not impressed with the proposal and sent the stock south by over 8%. It was also trading lower in extended trading on Thursday. US stock markets are closed today due to Good Friday.

AMC Entertainment tried to clear the air over its proposal “This is not an approval of an actual issuance of those shares but would give AMC’s board the flexibility to authorize future issuances of shares for a variety of purposes, if the board determines it is in the interests of AMC’s shareholders. When you’re navigating these uncharted waters of the pandemic, flexibility is a very good thing,” said a company representative.

Meanwhile, in its recent filings, AMC Entertainment provided the details of the fat bonuses that senior executives earned in 2020 despite the company losing $4.6 billion in 2020. The company paid $17.5 million as “special incentive bonuses” last year in two rounds with the CEO getting $5 million out of that.

In its filing, the company said that it paid these bonuses “In order to recognize the extraordinary actions taken by the management team during the COVID-19 pandemic to secure the Company’s survival and preserve stockholder value and to retain management and key employees to enable the Company to emerge from the impact of the COVID-19 pandemic.” The company seems to be paying its senior executives for the massive capital raise which as previously discussed will be a long-term drag on the earnings.

AMC Entertainment burnt $1.3 billion of cash in 2020 and the condition is not expected to reverse anytime soon.

The company expects its cash burn to be around $124 million every month in the first half of 2020 which is similar to what it has seen in January and February. It expects the cash burn to fall to $50 million per month in the third quarter. While the company expects to become cash neutral in the fourth quarter it seems like a tall ask looking at the still uncertain economic environment.

To be sure, AMC has reopened nearly all of its cinemas in the US with safety protocols which include “social distancing & automatic seat blocking in each auditorium, mandatory mask wearing, and upgraded air filtration with MERV-13 air filters, as well as many other important health, sanitization and cleanliness efforts.”

However, it remains to be seen how many people get drawn to the cinemas with movies releasing simultaneously on streaming platforms.

Disney released its widely awaited title Mulan online in 2020 and has since been releasing movies on its streaming platform Disney+. Disney sees streaming as its future and last year restructured its business to put streaming at the center.

There has been a lot of heartburn among cinema chains as movie production houses are simultaneously releasing their movies on the streaming platform. Cineworld gave a miss to “Raya and the Last Dragon.” While the animated movie screened in 2,045 cinemas across North America it grossed only $8.6 million.

With fears of contracting the coronavirus, consumers now also have the optionality to watch new movies online. This is a long-term challenge for cinema chains as the trend of streaming movies alongside cinema releases might continue even after the pandemic.

Meanwhile, cinema chains like AMC Entertainment might look at exclusive deals with movie production houses. Last month, Cineworld signed a deal with Warner Brothers to show its movies for 31 days before they are released online on streaming.

All said the long-term outlook for AMC Entertainment stock looks cloudy. Given the high valuations which are further compounded by dilution fears, it does not looks like a good long-term bet at these prices.