Over the weekend, General Motors (GM), the largest US automakers, unveiled two electric vehicle models. 2021 is turning out to be a pivotal year for the company as it transitions from a predominantly ICE (internal combustion) engine carmaker to an automaker producing zero-emission vehicles.

On Sunday, General Motors unveiled the redesigned Chevy Bolt Electric model along with the new Chevy Bolt EUV (electric utility model). The Chevy Bolt was launched in 2017 and was hailed as a “Tesla-killer” by many.

The revamped Chevy Bolt Electric would start at $31,955 which is more than $5,000 cheaper than the previous model. Notably, electric vehicle makers including Tesla have been lowering the vehicle prices to pass on the savings from lower battery costs to consumers.

The Chevy Bolt’s revamped model would have a more upright bumper cover and new interior seats that “more comfortable with a triangular geometric pattern and contrast color stitching providing a more upscale look and feel,” according to Jesse Ortega, executive chief engineer for the model. The model would have a range of 259 miles on a full charge which is lower than what Tesla Model 3’s base model offers.

It is worth noting that having a higher range in electric vehicles helps in lowering the range anxiety that potential buyers might have. Last month, Chinese electric vehicle maker NIO unveiled its ET7 sedan that would have a range of 621 miles with a 100 kWh battery.

Along with the revamped Bolt Electric, General Motors also launched the Bolt EUV. General Models launches Bolt utility vehicle that would start at $33,995 and would have a range of 250 miles. GM intends to launch 30 new electric vehicle models globally between 2020-2025 and these two models are part of the scheme.

Bolt has been General Motors’ flagship electric vehicle brand. “Since 2017, we have sold more than 100,000 Bolt EVs globally, and our owners have accumulated more than 1.2 billion miles of EV travel,” said Steven Majoros, Chevy vice president of marketing. He added, “Bolt EV has helped make Chevrolet the number two selling EV brand and current Bolt EV sales were up 26% in 2020.”

Tesla’s CEO Elon Musk expects the FSD price to eventually rise to $100,000. During the company’s fourth quarter earnings call, he tried to justify Tesla’s soaring valuations by pointing to its software capabilities.

Why 2021 is a pivotal year for General Motors

There has been a tectonic shift in the automotive industry. A few years back, electric models were just a passing mention in the product portfolios of legacy automakers. Fast forward to 2021, all legacy automakers see zero-emission vehicles as the future. Along with the push from governments, there has also been a higher demand for zero-emission vehicles from consumers.

Earlier this year, GM said that it would sell zero-emission vehicles by 2035. While Ford has also committed billions of dollars to electric vehicles, General Motors became the first Detroit automaker to commit fully to a zero-emission future.

“General Motors is joining governments and companies around the globe working to establish a safer, greener and better world,” said General Motors’ CEO Mary Barra in a statement. She added, “We encourage others to follow suit and make a significant impact on our industry and on the economy as a whole.”

Earlier this year only, Cruise, which’s backed by GM received an investment from Microsoft. In its fourth quarter earnings call, General Motors said that Cruise is now valued at an estimated $30 billion. The company has now started using autonomous technology in its vehicles which again makes a pivotal shift for the legacy automaker. Also, in 2021, for the first time, General Motors would invest more in zero-emission and alternate vehicles as compared to its ICE vehicles. 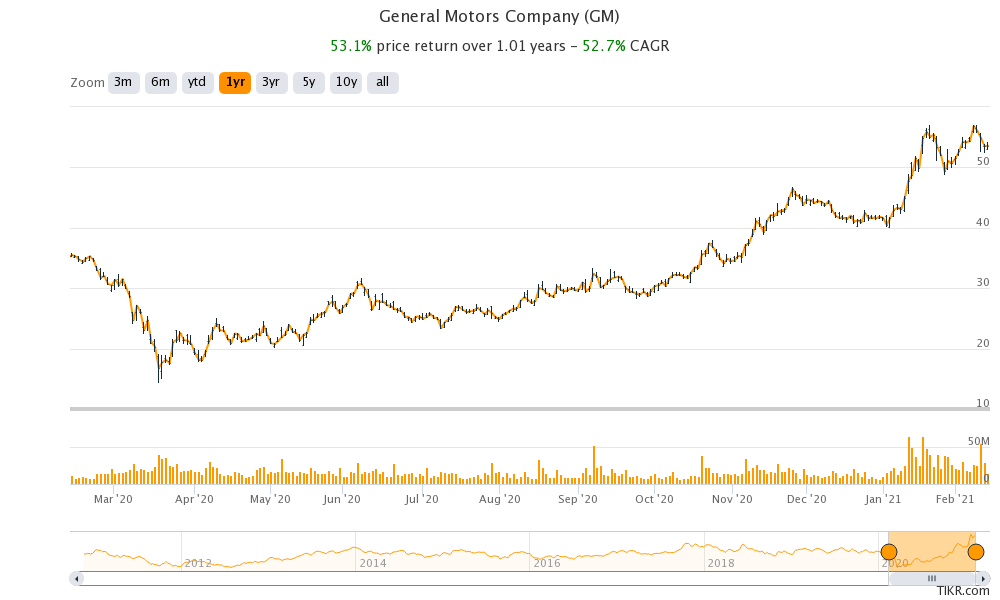 Over the last few years, markets have been cold to legacy automakers like Ford and General Motors. Investors have instead preferred pure-play electric vehicle companies like Tesla and NIO.

That said, markets have now started to take note of the evolution of GM into a zero-emission automaker. The stock has gained 53% over the last year and 29% year to date. While the stock’s returns are nowhere near the 740% returns that Tesla delivered in 2020, it nonetheless shows that markets are finally warming up to General Motors stock after years of a cold shoulder.

GM stock trades at an NTM (next-12 months) price to earnings multiple of 10.4x which is nowhere near what Tesla trades at. As General Motors ramps up its electric vehicle and autonomous driving plans, it could see a valuation rerating.

During General Motors’ fourth quarter earnings call, RBC Capital Markets analyst Joseph Spak asked the management about plans for unlocking value. Notably, many analysts have been contemplating that the company would separate the electric vehicle business to unlock value.

Responding to the question, General Motors CFO Paul Jacobson said “I would say is that there’s tremendous opportunity here to help the market understand that we’re really transitioning from what I would say has been historically kind of an old-school industrial-type mindset for the market to a real technologically savvy, growth-oriented company that’s really going into a lot of new markets.”

He added, “And as we see those continue to develop and we continue to ratchet success stories like Cruise and what I believe BrightDrop will be as well as the EV portfolio, I think there’s a lot of opportunity here to drive value for our shareholders.”