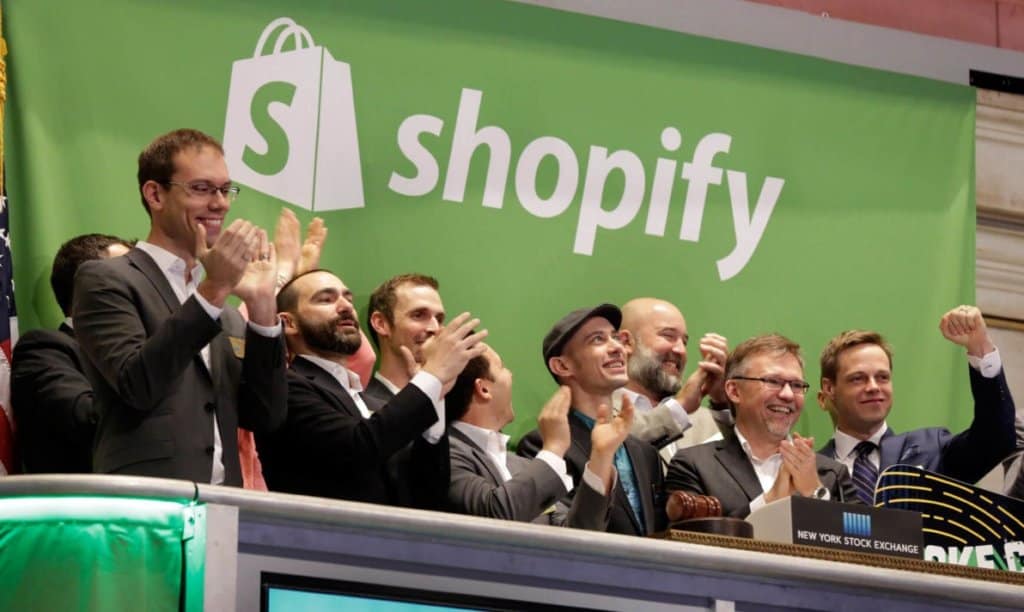 Shopify stock climbed more than 11% in yesterday’s stock trading session after the company beat analysts’ revenue and earnings estimates for the quarter as the tailwinds resulting from the pandemic seem to be enduring for longer than expected.

Sales of the e-commerce platform more than doubled those of the same period last year, landing at $988.6 million while beating analysts’ forecasts for the quarter by more than 15%.

Revenues from merchant solutions showed the strongest advance as they jumped from $282.4 million last year to $667.9 million in the first quarter of 2021, resulting in a 137% leap.

Higher gross merchandise volumes (GMVs) were responsible for this jump, with Shopify processing $37.3 billion in transactions for merchants registered with the platform, a figure that was 114% higher than that of the first quarter of 2020.

Meanwhile, the adjusted operating income of the e-commerce solutions giant landed at $210.8 million or 21% of its quarterly sales, which represents a major improvement from the $7.3 million adjusted operating loss reported a year ago.

The company also reported an adjusted net income of $254.1 billion and $2.01 in diluted earnings per share after deducting the impact of a $1.3 billion unrealized gain from the firm’s equity investment in Affirm, a fintech company that went public earlier this year. Analysts’ estimates had put Shopify’s EPS at $0.19 for the quarter.

In regards to the future of the company, the management informed that they continue to expect that, as vaccines continue to be rolled out, a portion of consumers will “likely rotate back to offline retail and services”. Therefore, the firm expects a “more normalized pace of growth” in the following quarters.

On the subscription solutions front, the Ottawa-based company expects that user growth will remain above pre-pandemic levels but slower than during the health crisis. Meanwhile, comments about the performance of the merchant solutions segment did not specifically address growth prospects for what remains of the year.

What’s next for Shopify stock?

Before the pandemic stroked, Shopify revenues were already growing at an incredibly fast pace. In the three years ended in December 2019, revenues moved from $389 million by the end of 2016 to $1.58 billion at a compounded annual growth rate of 59.5%.

If we assume revenues will continue to move at that pace in the following twelve months, we could see Shopify sales surging to $4.67 billion as more merchants sign up for the platform as a result of an accelerated digital transformation.

Meanwhile, Shopify’s net margins have improved since September 2020, meaning that the firm could be prepared to deliver sustainably strong profitability in the foreseeable future, with net margins possibly landing between 10% to 20% of sales. In that scenario, net income could grow to a range from $500 million to $1 billion.

Based on the company’s current market capitalization of $160 billion, the stock would be valued at 320 and 160 times its next twelve-months earnings respectively, which doesn’t necessarily sounds stretched as the firm’s profitability will grow exponentially from here as economies of scale for the business keep producing higher margins on higher sales over time.

You can buy Shopify shares by signing up with any of the firms in our list of favorite stock brokers.