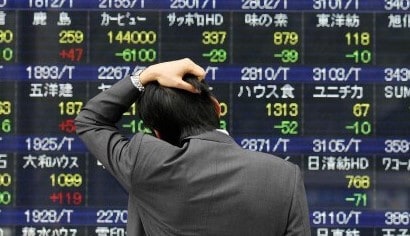 The government-managed fund, which currently oversees around $1.4trn (¥150.63trn) in assets for Japanese citizens, saw its portfolio drop by around $164.7bn (¥17.7trn) as a result of the February-March sell-off that wiped off more than $16trn from global stock markets.

The fund’s significant exposure to foreign shares was the primary cause of the sharp quarterly drop, as the GPIF allocated around 25% of its funds in equity instruments, even though domestic shares also contributed to the loss, as they comprise another 25% of the fund’s entire portfolio.

During the first quarter of the year, the fund recorded $93bn (¥10.2trn) and $69bn (¥7.4trn) in losses on foreign and domestic equities respectively, while bonds performed a little better, with foreign bonds generating $1.07bn (¥115bn) in earnings while domestic bonds lost $1.72bn (¥185bn).

“The decline in domestic and foreign equities led to a negative return for the fiscal year”, said the president of GPIF Masataka Miyazono, citing that “the global coronavirus pandemic led to investors taking a risk-off stance”.

The head of the pension fund also acknowledged that the portfolio was heavily exposed to “equity volatility”, but he justified the decision saying that is “alright for now” citing a “low-yield environment” that makes less risky investment alternatives – such as bonds – unattractive for the fund’s goals.

Despite the size of the losses, they were expected and analysts said that the pension fund’s portfolio should have gained ground between April and June, following the recovery that most stock markets around the world saw during that period.

However, Miyazono also said that “in the long run, the pension fund should correct the allocation of equities” to reduce the volatility of its returns.

Since the month of April, the fund has set an equally-weighted portfolio that will devote 25% of its assets to each class it invests in – domestic and foreign stock and bonds – even though the actual size of the allocations may be different depending on how the value of the financial instruments that comprise the portfolio fluctuates over time.