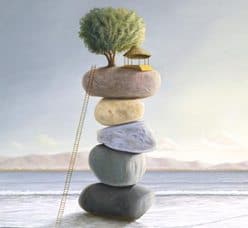 The bond market has ridden a roller coaster ride this year, on the back of the Fed threatening to taper the amount of bond purchases it makes and then backing out at the last minute. The subsequent rise and fall of yields gave some indication of what could happen when the Fed does finally decide to pull back.

This has led some to speculate that QE will effectively last forever. Central banks will have to continue buying bonds in perpetuity, they say. The alternative is to step away from debt monetization and allow interest rates to soar, which will lead to a deflationary depression.

But Michael Pento, President, of Pento Portfolio Strategies, has another idea. What if the three main Central banks worked together?

“If the Fed, ECB or BOJ were to decide to move away from quantitative easing they will have to coordinate that tightening amongst all three banks.” Pento said. “If any one of these central banks acts unilaterally, it will cause a humongous and disruptive move in currencies.”

So whats the chances of getting the Fed, BOJ and ECB to coordinate the tightening of monetary policy? Absolute “zero”, says Pento.

Therefore, you can expect quantitative easing to last far longer than most people anticipate. That makes inflation public enemy number one. “The need to own hard assets should become even more pronounced next year, as markets gradually come to realize that central banks have totally killed the private market for sovereign debt.” Says Pento. “Any resuscitation of government bonds will require a rise in interest rates that will be, unfortunately, catastrophic.”

Investors.com: – Does your muni fund have too many nonrated bonds? – High-yield municipal bond funds have been one way for investors to get extra income in a low-rate environment. But this year the chickens have come home to roost.

Port South: – State treasurer Kennedy warns against Puerto Rico bonds. – Louisiana investors who use mutual funds to save for college, retirement or a rainy day should be alerted to the fact that they could unknowingly be investing in high-risk Puerto Rico bonds, according to State Treasurer John Kennedy.

CNBC: – Is the muni bond market about to blow up? – When there is turmoil in the $3.7 trillion municipal bond market, as there has been this year, America’s mayors get very nervous. Scott Smith, mayor of Mesa, Ariz., and president of the United States Conference of Mayors, said, “The vast majority of infrastructure in this country is financed by tax-exempt financing; most of the schools, most of the streets, most of the sewer lines and the highways.” According to the Conference of Mayors, between 2003 and 2012 90 percent of the munis issued (worth about $1.65 trillion) went to build infrastructure.

Income Investing: – What gets you 6.5% yield: 40-Yr munis from a bankrupt issuer. – If you’re looking to check off both interest-rate risk and credit risk from your holiday shopping list, look no further than Jefferson County’s new municipal bonds.

Income Investing: – Long-dated munis quietly outperforming. – The municipal bond market continues to struggle in many ways, but longer-dated muni bonds have quietly put together a bit of a winning streak.

Learn Bonds: – Asset allocation of bonds. – One of the biggest questions facing investors of all ages and risk tolerance are what percentage of their portfolios should be devoted to bonds? It’s actually a very broad question with no one-size-fits-all answer. The best we can do is lay out some general parameters and from there, you’ll need to hone in on the specifics yourself.

Turkish Weekly: – Foreign money leaving U.S. – The highest capital outflow in US since February 2009 took place as foreign investors reduced US treasury bonds and stocks by 106.8 billion dollars, announced US Treasury Department on Monday. Foreign investors are now focusing more on loaning instruments and lowering the size of their portfolios.

Bloomberg: – Bond dealer retreat seen in trades shrinking 39%. – Corporate-bond trades have shrunk to the smallest in a year, exchanging hands in chunks that have contracted 39 percent from before the credit crisis in another sign of a dealer pullback that threatens to drive up borrowing costs.

Motley Fool: – Monthly REIT income: The high-yield risk. – One of the biggest changes in retirement is the loss of your salary. Buying securities that pay monthly dividends can replace that lost income. There are a number of real estate investment trusts (REIT) that pay monthly, but you should be careful to avoid the potential siren song of a high yield.

ETF Trends: – New junk bond ETF deserves more attention. – It has not been particularly good year for high-yield bond exchange traded funds. Things have been even worse for emerging markets debt funds, both the dollar-denominated and local currency varietals.

Schroders: – Multi-Asset Insights: emerging market debt, Europe and low volatility (for now!). – The domestic environment for most emerging market bonds remains challenging due to slow growth and rising inflation, posing a challenge to central banks. Emerging markets suffered a broad sell-off over the summer on concerns that the Federal Reserve (Fed) would begin to taper quantitative easing. Economies with large and growing twin (fiscal and current account) deficits came under most pressure due to their vulnerability to a reduction in liquidity.

Bond Funds: – Emerging markets brace for Fed tapering disruption. – Bloomberg Economics Editor Michael McKee about the challenges the Federal Reserve faces in tapering bond buying and the potential impact on emerging markets. He speaks on Bloomberg Television’s “In The Loop.”

Artemis: – Catastrophe bond risk premiums, expected losses down again in Q3. – It’s time for another of our quarterly looks at two key metrics which reflect recent trends in the catastrophe bond issuance market. These two metrics demonstrate where insurance-linked securities investors risk appetite lies, when it comes to cat bonds, and how pricing has moved recently.

Every Investor: – Finding a yield from bonds in return-free risk environment. – “Return-free risk” is the expression some have coined to describe the current outlook for fixed income investing.

Moneynews: – Bond market swoon may have begun. – Bonds enjoyed a massive rally from 1981 until July 2012, but now a sustained decline may have begun, experts tell The Wall Street Journal.

Business Insider: – How the correlation between stocks and bonds has changed with each new QE program from the Fed. – The chart below shows how the correlation between U.S. Treasury yields and the Dow Jones Industrial Average has varied under each iteration of the quantitative easing program of bond purchases the Federal Reserve has employed since the financial crisis.

SL Advisors: – Investors are overweight bonds. – So says the Wall Street Journal in an article this morning announcing that Investors See End To Bond Rally. Of course the real problem with fixed income is not just the eventual tapering of asset purchases by the Fed, maybe sometime next year under Janet Yellen or maybe beyond that. It’s that yields don’t provide any return to compensate even current inflation never mind the possibility of it one day rising.