Tesla Motors Inc  hopes to help electric vehicles make their way into the mainstream with the Model 3.  A successful Model 3 would also help the automaker become profitable. Elon Musk has laid out a grand master plan for a complete overhaul of the transport system with electric vehicles. In fact, he thinks that all form of transport (except for space travel) should be electric. The first phase of the master plan involved building the Roadster, Model S, and a little deviation to the Model X in order to validate the idea of an EV. Tesla has largely succeeded in the validation of the idea of electric vehicles and the firm can’t seem to meet up with the demand for its cars.

Now, Tesla Motors is ready to unleash the Model 3, get electric vehicles to the mainstream market, and reach its goal of producing 500,000 cars annually by 2020. CEO Elon Musk, has said that the Model 3 will be unveiled next month and the tech space is abuzz with speculations about what to expect from the car. Latest news reports indicate that the Model 3 might come out at a much lower price than the initial $35,000 price tag that the company provided.

Bloomberg Business reports that Tesla Motors has confirmed the price tag of the upcoming Model 3 at $35,000. The $35,000 price tag doesn’t sound particularly impressive because General Motors’ Chevy Bolt, which has been designed to rival Tesla’s Model 3 has a price tag of about $37,500. However, Tesla has confirmed that the $35,000 price tag is indeed the price before tax incentives and the fact that buyers can access federal and state taxes sweetens the deal on buying a Model 3. 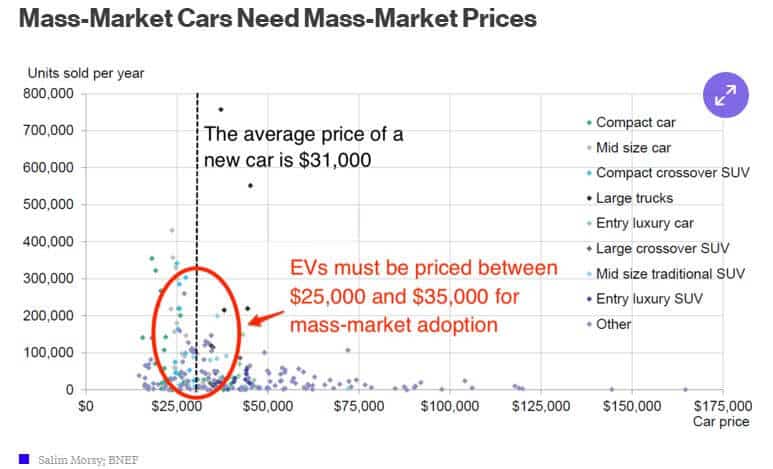 Apart from the build quality of the Model 3 and the fact that it will have a 200-mile range, the most important factor that can make or mar Tesla’s goal of taking EVs to the mainstream market is the price. Bloomberg notes that the average cost of a new car in the U.S. is about $31,000 and that almost all mass-market vehicles that cost more than $31,000 in the U.S. are trucks and SUV. Hence, if Tesla sells the Model 3 under the $31,000 threshold, the mass-adoption of the Model 3 will progress at a lightning speed.

Tesla’s “Not a Dream”

Tesla Motors has shied away from advertising, the firm doesn’t spend any money on ads, it doesn’t work with an ad agency, and it has no CMO. Yet, the firm has been able to obtain free media coverage, buzz, and  tons of online content, all thanks to the disruptive nature of its product, the power of its brand, and the larger-than-life personality of Elon Musk. However, Tesla Motors will eventually need to start advertising its amazing vehicle especially now that it has its sights on the mass market.

A number of Tesla fans have taken it upon themselves to create advertising content for Tesla. The latest Tesla concept ad is called “Tesla Not a Dream” and it depict Tesla Model S as the last hope of humanity in a dystopian wasteland of gas-guzzling automobiles. Mashable notes that the ad is “Reminiscent of Apple’s famous “1984” Mac commercial, this is the kind of inspirational spot that could lead to a lot more Tesla sales”.