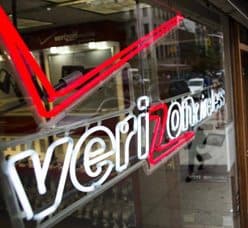 Unless you’ve just returned from a weeks vacation to the Sea of Tranquility, it can’t have escaped your attention that a small bond sale went down this week.

Verizon’s record breaking $49 billion dollar offering, was not only oversubscribed but jumped in their first full day of trading, delivering investors a healthy $2.54 billion profit.

The scale of the purchase and the subsequent demand took many by surprise, not least Verizon themselves. Who had to cancel an investment roadshow in Europe, intended to market the bonds, due to unprecedented demand at home.

The reason for the strong demand was initially put down to Verizon having to offer above market rates to get fund managers to bite. But now it appears, there could be another reason.

According to people familiar with the deal, the largest chunk of Verizon debt was taken up by two bond fund heavyweights. Pacific Investment Management Co. PIMCO and BlackRock Inc. who together, bought about $13 billion of Verizon bonds.

After the purchase these two giants now hold around 10% of Verizon’s total outstanding debt, based on Verizon’s bond offering document, assuming they didn’t sell a large amount of bonds after the offering (for a large profit).

But being such a large buyer of corporate debt has its benefits, far from Verizon having to offer higher rates to tempt investors, it seems both PIMCO and BlackRock were influential in the rate being set high in the first place.

PIMCO: – What’s happening to bonds and why. – To say that bonds are under pressure would be an understatement. Over the last few months, sentiment about fixed income has flipped dramatically: from a favored investment destination that is deemed to benefit from exceptional support from central banks, to an asset class experiencing large outflows, negative returns and reduced standing as an anchor of a well-diversified asset allocation. Understanding well what created this change is critical to how investors may think about the future, including the role of fixed income as part of prudent investment portfolios that help generate returns and mitigate risk.

Morningstar: – Where can you still find value in the bond market? – Corporate bonds are overvalued and junk bonds look risky – but buy a strategic bond fund and the manager will do the blend for you.

WSJ: – A toxic subprime mortgage bond’s legacy lives on. – Made entirely out of loans from Countrywide Financial Corp., the bond was so battered by delinquencies in 2009 it appeared that nearly all of the thousands of mortgages inside the bond could default. One might think that today, such a relic of misbegotten lending would be as dead as orbiting space junk. Instead, CWABS 2006-7 is alive and well, a sought-after asset that has made big profits for savvy investors.

FT: – Markets: The debt penalty. – Wall Street bond-trading desks are shrinking as banks hold more capital. The liquidity they provided may be missed.

The Economist: – A big number from Verizon. – DEBT crisis? What debt crisis? The biggest corporate-bond issue ever was completed this week. Verizon Communications, an American telecoms group, issued a whopping $49 billion of bonds in order to finance the buy-out of Vodafone’s stake in its wireless operations. That shattered the previous record, Apple’s paltry $17 billion issue earlier this year.

Morningstar: – What’s in my bond fund? The Detroit bankruptcy and its impact on muni-bond portfolios. – Concerns about the Motor City bankruptcy have helped rattle muni markets, but how much direct exposure does the typical muni-bond fund hold?

USA Today: – Junk bonds: Are we talking trash here? – The Federal Reserve has been keeping short-term interest rates near zero for the past five years in a bid to revive the economy. Low rates are swell for lenders. For savers? Not so much. To get higher returns, you have to accept higher risk — which, for many investors, has meant high-yielding, low-quality, high-risk junk bonds. How have those investors done? Quite well, actually.

FT: – Return to junk yard for emerging market debt. – Emerging market debt has been junked. It took a decade from the 1997 Asian crisis for EM dollar bonds to shift from trading exactly like global high yield, or junk, bonds to move more closely in line with investment-grade.

Pragmatic Capitalism: – Secular bull in bonds is dead, but expect a near-term rally. – David Rosenberg is sticking with his long-term call on the end of the US government bond bull market, but he says we could see a near-term rally due to 4 factors.

Monringstar: – How to build an income portfolio. – Ask the Expert: In order to provide a sustainable inflation-beating income, investors must blend all funds investing in all assets.

MarketWatch: – Verizon bonds’ big demand shows investor hunger for income. – A surge in demand led to the successful sale of the largest-ever bond offering Wednesday in a sign that investors are still buying bonds even as interest rates rise.Verizon Communications Inc issued $49 billion in debt — nearly three times as big as the next largest deal — with many investors still getting smaller allocations than they would have liked.

Forbes: – Think an all-bonds portfolio is safest? Think again. – The idea that stocks are riskier than bonds is widely accepted at face value in finance and investing.  Stock prices tend to swing both higher and lower, and more frequently, than bond prices, and unlike with a bond, owning shares in a company doesn’t come with a commitment that your investment principal will be paid back at a future date.

Daily Finance: – 5 Things you really need to know about bonds right now. – Most investors believe that the stock market is the riskiest way to invest. But as many investors have learned the hard way lately, even supposedly safe investments like bonds can create losses in your portfolio.

Rochester YNN: – Benefits of municipal bonds outweigh the risks. – Though risky, buying municipal bonds may be a great option for those looking to earn money on an investment without paying taxes on it. YNN’s Tara Lynn Wagner filed the following “Money Matters” report.

Might be jumping the gun, but the decimated leveraged fixed income yield sector (mREITs, CEFs, etc) is starting to gain footing

Muni bond volume should total $3.51B next week, down from $5.97B this week, Ipreo, Bond Buyer and Thomson Reuters numbers show.