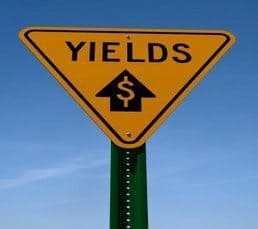 This article was originally published as Market Commentary on CharlesSchwab.com

The yield curve has appeared in quite a few news headlines recently. Why is this technical-sounding tidbit of financial jargon suddenly getting so much attention?

The short answer is that the yield curve has a reputation for predicting recessions, and some market watchers are worried recent changes to the curve’s shape are sending a warning signal about the economy.

Are they right? Let’s take a closer look.

What’s in the yield curve?

The yield curve is basically a snapshot of the yields on a collection of bonds of different maturities, from the very short to the very long. The “curve” is the line you could plot connecting those yields.

Normally, the yield curve slopes upward from the shorter maturities to the longer ones, because short-term bonds usually offer lower yields than longer-term ones. Why? Investors usually require some extra return in exchange for agreeing to tie their money up for longer periods.

When the economy is going strong, the yield curve tends to steepen as investors grow concerned about inflation and potential interest rate hikes by the Fed, and require higher yields from longer-term bonds to compensate.

When the Fed raises interest rates, short-term yields rise relative to long-term yields as inflation expectations ease. That makes the yield curve flatten—in other words, the difference between short- and long-term rates shrinks.

However, if the Fed raises rates too quickly, causing short-term yields to rise above long-term yields, then the yield curve can invert. That’s when investors start worrying about a potential recession.

So what is all recent fuss about? The yield curve has been flattening for a while now, due mainly to the fact that the Fed has been steadily raising interest rates over the past few years. But part of the curve—the spread between three-year and five-year Treasuries—actually inverted earlier this month, and that spooked some people.

“It’s widely known that every recession in modern history has been preceded by an inverted yield curve. Hence, all the recent talk about the risk of a recession,” says Kathy Jones, senior vice president and chief fixed income strategist at the Schwab Center for Financial Research. “However, there are important caveats when it comes to using the yield curve as a recession indicator.”

“The important message from an inverted yield curve is that the Fed is tightening policy—and eventually, when policy is very tight, the economy will slow,” Kathy says. “If the Fed continues to drive short-term rates higher, the risk of recession will increase. If the Fed slows down or pauses its rate hikes in 2019, the risk of recession would probably ebb and the yield curve will likely steepen.”

“The bottom line is that the Fed’s actions will play a role in determining whether we’ll have a recession in the next year,” she says. “We think the Fed will probably raise rates at its meeting later this month and then two more times in 2019, bringing the federal funds rate to about 3%.”

“That’s to make no mention of the risks from the trade dispute with China, falling commodity prices weighing on emerging markets and slowing growth in Europe, all of which could weigh on growth,” Kathy says. “In the meantime, the economy is still doing pretty well and unemployment is at historical lows.”