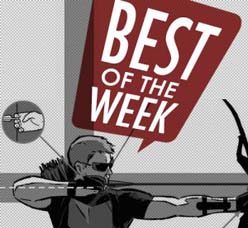 LearnBonds: – This homebuilder bond yields well over 6%. – If you are worried about a bubble in junk bonds, you are likely not alone.  As the chart below shows, with the “BofA Merrill Lynch US High Yield Master II Effective Yield” hanging out in the sub-6% region, it is not surprising how hard it is to come by good value among non-investment grade bonds.

LearnBonds: – Breaking down March jobs data. – The March jobs data is finally in. The ink was not yet dry before the rationalization, excuses and truth stretching began. We break down the jobs data and report the U.S. employment situation as we see it.

LearnBonds: – Bond investment strategy: Considering opportunity cost. – Given the 30-year “bull run” that bonds have experienced, many investment strategists are urging caution on buying/holding fixed-income securities. The commonly held belief is that rates will trend higher, spelling problems for those that own bonds. While there may be a general “risk” to owning bonds in a rising rate environment, the peril is generally quite different from the hazards endemic to the stock market.

LearnBonds: – High hopes for bond rates? Don’t get too excited yet. – Recently, more and more economists and economic agencies, like the International Monetary Fund, have been arguing that our expectations of economic growth in the world need to be revised downward because it has become more and more apparent that many major countries in the world need to correct structural problems in their economies. The problem is that until these structural problems are corrected, economic growth will be much lower than it has been over the past fifty years or so.

LearnBonds: – Three safe, little known high yield stocks. – Are you frustrated by the lack of high yield stocks in all the safe, well-travelled corners of the world of bonds you’re used to visiting?  Well, just like relatively undiscovered vacation bargains you hear about every once in a while, there are regions of the financial markets that offer deluxe yields with surprisingly low risk that remain known only to the cognoscenti.  Here’s my guide to two of them.

Reuters: – U.S. muni bond sales of $5.4 bln next week include Illinois debt. – U.S. municipal bond sales will rise slightly next week to $5.4 billion, up from a revised $4.5 billion this week, according to Thomson Reuters estimates on Friday.

Bloomberg: – Final four contender UConn to begin $220 million Muni sale today. – The University of Connecticut plans to sell $220 million of municipal bonds starting today as its teams are set to play this weekend in the Final Four of the men’s and women’s national college basketball tournaments.

Kiplinger: – A Muni fund that pays more. – It’s been a feeble year for municipal bond funds. But if you’re looking for decent yield and you’re in a high tax bracket, muni bonds, which pay interest that is generally free of federal income taxes, still make sense.

ETF Trends: – Muni Nation: Mazzilli’s municipal musings – Part 2. – At this time, I believe the underlying market for municipal bonds looks favorable. Federal spending cuts, in my opinion, are not likely to affect municipal credits, and the U.S. economy continues to grow at a moderate rate, which is good for municipals.

Business Standard: – Rising bond yields might attract more foreign investors in debt. – Rising government bond yields could attract more flows from foreign institutional investors (FII). The yield on the 10-year benchmark government bond 8.83 per cent 2023 has already breached the nine-per cent mark. The Street believes in the worst-case scenario, it might even touch 9.25 per cent, with investors showing limited appetite for government securities in the Reserve Bank of India (RBI)’s auctions.

WSJ: – Treasurys rise for 4th day. – After an initial pullback, U.S. Treasury bonds regained strength Tuesday and extended their winning streak into a fourth straight session. The price rebound reflects buyers’ belief the Federal Reserve will be in no rush to raise interest rates amid a low threat of inflation.

IFR Asia: – U.S. market roars in first quarter. – The US investment-grade new issue market wrapped up the busiest quarter ever recorded for corporate bonds on Monday, with US$307.53bn worth of securities priced, according to IFR Markets data.

ETF.com: – Corporate debt sales raise ETF questions. – U.S. companies issued $317 billion in debt in the first quarter—the most in five years—and ETF investors will soon have access to a lot of these bonds through various corporate-bond ETFs. But given the specter of rising rates, investors should think carefully about the way such “spread” products work in a rising-rate environment.

Businessweek: – Exit anxiety seen as mutual funds hog corporates. – The biggest buyers of U.S. corporate bonds since the financial crisis may be the least likely to stick around when the Federal Reserve raises interest rates.

FT: – Junk bond investors dig deep for value. – Just as hopeful prospectors venture back to abandoned gold mines in California, so fund managers are engaged in a similar quest to find overlooked nuggets in the global junk bond market.

Bullfax: – Bond managers warn against complacency amid low defaults. – Global default rates may be low, but that should not blind investors to the risk of companies issuing high-yield bonds going bust, according to fund managers.

Blair Jensen: – Keep an eye on junk bonds. – Over the past month High Yield (junk) bonds have lagged the performance of Investment Grade (high quality) bonds. This shows a move to quality within the bond space.

Forbes: – High yield bond funds see $640M investor cash inflow. – Retail-cash flows for high-yield funds were positive $640 million in the week ended April 9, with the exchange-traded segment influence just 32%, or $203 million, according to Lipper. The inflow follows last week’s $493 million infusion, which was ETF-heavy, at 69% of the total.

Financial Express: – Emerging market bounce may disappoint long-term investors. – A tentative recovery in emerging markets may paradoxically disappoint some investors who had hoped a sell-off earlier this year would push governments into making reforms to stimulate longer-term economic growth.

NY Times: – I.M.F. warns of risk from emerging-market corporate debt. – As fears mount about emerging markets, American mutual fund investors with significant exposure to bonds issued by indebted companies in fast-growing economies may be at risk, the International Monetary Fund warned in a report published on Wednesday.

Reuters: – Emerging market revival no signal to fill your boots. –  Institutional investors are being selective in their return to emerging markets after a heavy sell-off, as there are too many pitfalls for a long-term portfolio to make a winning strategy out of simply buying cheap.

ETF Daily News: – 5 ETFs for a relaxed retired life. – There are a number of choices available in the ETF world for investors to accelerate their retirement savings by limiting expenses. Below, we have highlighted five ETFs that could prove extremely beneficial and standout in specific categories over the long term.

Citywire Global: – Carmignac cuts US HY and China exposures. – Carmignac Gestion has rejected the notion that inflation is returning to Europe while also making moves to reduce its exposure to US high yield and China over the past month.

PIMCO: – Avoiding losers is as important as picking winners in high yield markets today. – It is no secret that global high yield markets continue trading near their all-time low yields that were reached in May 2013. With average yields at 5.39% for the U.S. and 3.77% for Europe (as measured by BofA Merrill Lynch U.S. High Yield and European Currency High Yield indexes as of 14 March 2014), we are still looking at a “medium yield” more than a “high yield” bond market.

WSJ: – Why investors should focus on after-tax returns. – It’s always important to think of the after-tax return when making an investment decision.  For some investors, that might mean investing their fixed-income allocation in tax-free municipal bonds. But, for other investors, not in the highest tax brackets, the better investment might be higher-yielding taxable bonds, and paying the tax bill.

Digital Journal: – Catastrophe bond market off to a record start in 2014, says Artemis. – Record first-quarter issuance as investors continue to be attracted to cat bonds and insurance-linked securities.

Barron’s: – The trouble with actively managed ETFs. – It’s the hottest club, so exclusive no one can seem to get in. Asset managers of all stripes are lining up to offer actively managed exchange-traded funds—so long as they can do it on their terms.

Yahoo Finance: – Tide turns from many out-of-favour funds. – Such was the case with mutual funds last quarter. The types of funds that did best were often those that investors rushed to exit in 2013.

Businessweek: – PIMCO’s Bill Gross picks up the pieces. – Bill Gross is working hard to steady the ship in the wake of El-Erian’s shock departure, back in March. It will be a long road, but don’t count against him pulling it off.

STL Today: – Bond market calms down after last year’s taper tantrum. – The Federal Reserve roiled the bond market last year with talk of tapering, but its actions have proven to be less scary than its words.