Tesla Motors Inc has a lot riding on the Model 3 electric car. The Model 3 will be the fourth car from Tesla Motors and it is being positioned as an affordable EV that will take electric cars beyond the exclusive circle of wealthy buyers and within the reach of mainstream automobile market.

Tesla’s previous models have high price tags that takes them beyond the reach of the average car buyer.  The Model S has an entry point of nearly $60,000 – and that doesn’t get you the popular bells and whistles. Most sell for around $100,000.  The Model X has an even higher price tag.  This has made Tesla Motors appear to some as a maker of toys for the rich. With the Model 3, Tesla can prove that is serious about bringing electric cars to the average driver.

The Model 3 will be introduced at the end of March and if you want one you’ll need to get in line to make a deposit – but you won’t get your cool new EV for at least a year.

What can you expect from the Model 3?

The Model 3 will be unveiled at an upcoming event in March but Tesla Motors has hinted that the car will not be fully unveiled at the event. Nonetheless, we can expect the Model 3 to be a sedan about the same size as an Audi A4. The firm’s CTO JB Straubel made the revelation last Thursday during the IHS Energy CERAWeek in Houston. Straubel also notes that the Model 3 “will surprise people with the level of features it includes.”

We expect the Model 3 to have a range of about 200 miles. More so, the car will debut the third auto platform from Tesla Motors because the firm had to build the car from the ground up. Straubel notes that “For better or worse, most of the Model 3 has to be new… “It’s a new battery architecture, it’s a new motor technology, brand new vehicle structure. It’s a lot of work.”

How much will a Model 3 cost?

Tesla CEO Elon Musk hinted that the Model 3 would cost $35,000. Last year, he said, “When I say $35,000, I’m talking about without any credits.” However, some folks have hinted that Tesla might not find it easy to sell the Model 3 at $35,000 because of Elon Musk’s penchant for filling his cars with bells and whistles.

Tesla Motors has cleared the air on the cost of the Model 3 and buyers can certainly expect the Model 3 to debut with a $35,000 sticker price. Tesla spokeswoman, Khobi Brooklyn was quoted saying, “We can confirm it’s $35,000 before incentives…We haven’t changed our minds.”

The Model 3 hits a sweet spot

The $35,000 price tag positions the Model 3 at the sweet price spot for massive car sales in the U.S., helping Tesla to reach its goal of 500,000 cars by 2020. Reports from the automobile market indicate that the average price of new cars sold in the U.S. is $31,000. Federal and state tax incentives will further reduce the cost of the Model 3 and encourage the widespread adoption of the Model as a mass market EV. 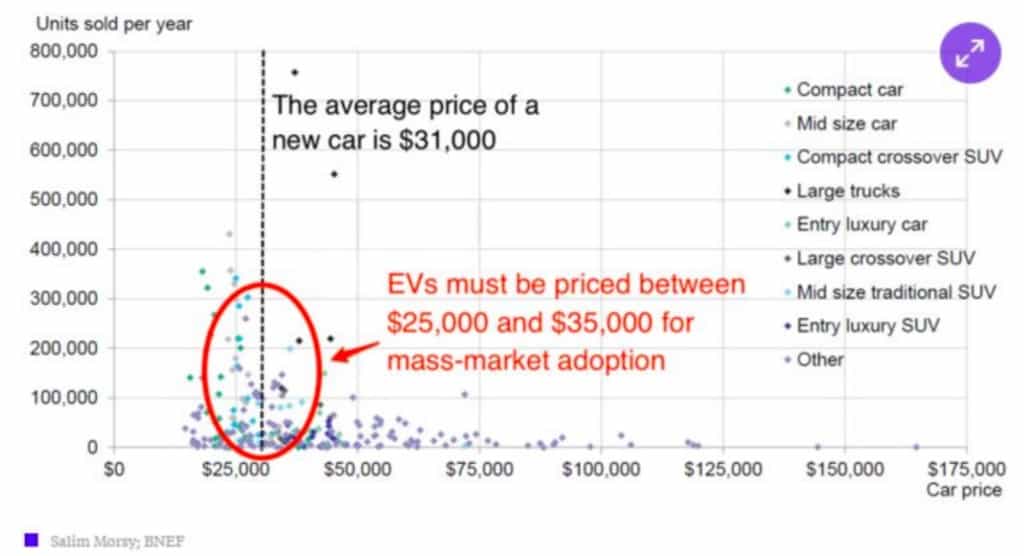 Tesla Motors Inc ‘s decision to price the Model 3 around the mass-market price is not a fluke; rather, it merges smoothly with Elon Musk’s master plan for disrupting the automobile world with EVs. Elon Musk has laid out a grand master plan for Tesla Motors to dominate the auto industry. In 2006, Musk said,

“our long term plan is to build a wide range of models, including affordably priced family cars… The strategy of Tesla is to enter at the high end of the market, where customers are prepared to pay a premium, and then drive down market as fast as possible…  I can say that the second model will be a sporty four door family car at roughly half the $89k price point of the Tesla Roadster and the third model will be even more affordable… When someone buys the Tesla Roadster sports car (Model S, Model X), they are actually helping pay for development of the low cost family car”.

Now, Tesla’s low cost family car is here and it costs $35,000. Nonetheless, , the $35,000 sticker price might be the price of a base version of the Model 3 – add-ons, trims, and options might significantly raise the price tag. However, $35,000 before tax incentives should buy you a Model 3 that will take you from point A to point B.

These are the best states to buy a Model 3

Buyers of electric cars qualify for some tax breaks as part of efforts by the government to encourage the adoption of cleaner energy sources in a bid to reduce our carbon footprint and pollution of the earth.  The IRS notes that “the Emergency Economic Stabilization Act of 2008 (EESA) and the American Recovery and Reinvestment Act of 2009 (ARRA)” has created two classes of tax credits for electric cars.

If you live in Massachusetts, you can get an extra $2,500 in tax credits from the state when you buy a Model 3 before the program ends in 2017.

Michigan bans the direct sales of Tesla’s cars but if the state changes its mind about Tesla tomorrow, you’ll get an extra $2,500 tax rebate in addition to the $7,500 tax break.

It appears that Texas has ended its $2,500 tax rebate for EVs but you can contact your representative to find out if the state plans to renew the program.

Maryland offers the buyers of electric cars excise tax credit of $3,000 as the state seeks to remove pollution from its roads.

Louisiana is also playing nice to buyers of EV—you might not find it easy to make heads or tail of the complex wordings of Louisianan tax breaks, but it appears that the state will give you a $3,000 tax relief on a Model 3.

South Carolina offers you the equivalent of 20% of the Federal tax incentives – you get an additional $1500 in addition to the $7500 Federal tax credit when you buy a Model 3.

Lots of debate and political wrestling gave birth to the impressive tax credits of $5000 that you can get when you buy a Model 3 in Georgia – it isn’t clear though if the generous tax breaks will continue in the coming years.

Colorado gives out a massive $6,000 in tax credits in addition to the Federal tax credit. Buyers of the Model 3 in Colorado will have the best deal because a Model 3 will set them back $21,500 after tax breaks.

From the foregoing, it is obvious that the Model 3 will be insanely affordable as Tesla Motors positions it as an easy entry point into the world of EVs. The federal and state tax incentives also provide buyers with more reason to buy the Model 3 over comparable rivals that run on fossil fuels. However, the tax breaks for electric vehicles will not last indefinitely.

Some states have limited their incentives to for the first 200,000 units of the cars sold and other states have started phasing out the tax breaks on electric vehicles. Tesla will start taking preorders for the Model 3 by March 31 – and you can order your Model 3 with a  deposit of $1000 as soon as the Model 3 configuration utility is live.

The Model 3 will go into production sometime in 2017 with deliveries beginning later in the year.