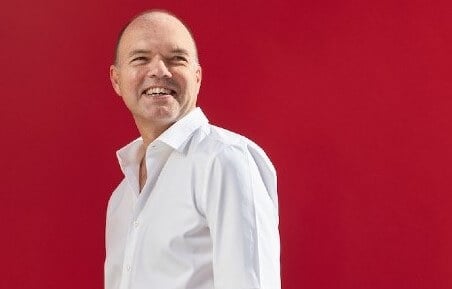 Vodafone has picked Frankfurt over London to float its newly-created large towers company early next year.

The world’s second-biggest mobile operator said on Friday its Vantage Towers unit, made up of 68,000 towers across nine European markets, is “a highly secure [business with], predictable cash flows underpinned by long-term, inflation-linked contractual arrangements.”

Vodafone chief executive Nick Read (pictured) added the launch of the new towers company was a significant step in his strategy of improving the return from Vodafone’s assets.

The mobile boss said the move would “unlock further value for shareholders, notably through the IPO targeted for early 2021”.

Vodafone to use cash to pay down debt

In February, the operator said the business would be based in Düsseldorf but did not say where it would list the company that it says had revenue of €950m and adjusted earnings before interest, taxation, depreciation and amortisation of €680m in the last financial year.

Vodafone said it intends to retain a majority stake in Vantage Towers after the listing.

Germany contains the bulk of the towers in the Vantage portfolio, but the decision to list the business in Frankfurt will represent a blow to the London Stock Exchange.

Vodafone said it will be Vantage Tower’s primary tenant, providing around 90% of its revenue at launch, but the new unit aims to add other long-term tenants to the business.

The mobile operator will use part of the proceeds from the initial public offering to pay down debt, which jumped after its €18.4bn takeover of the European assets of US rival Liberty Global.

Hargreaves Lansdown analyst William Ryder said: “Vodafone will be losing some attractive assets when it sells Vantage Towers, but management thinks shareholders will get more for their money if the towers can be valued separately through an IPO. Vodafone’s debt burden is also higher than we’d like it to be, so any cash from the sale can go towards reducing this.”

Vodafone also announced a deal to merge its Greek towers with rival Wind. The business could also contain Vodafone’s 50% share of the UK tower company Cornerstone by the time of the float, which would boost the size of Vantage.