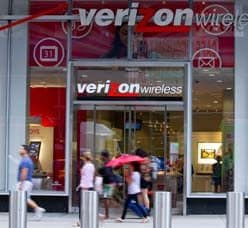 Verizon Communications Inc. (VZ) launched the worlds largest corporate debt sale this morning when it announced it would sell $49 billion worth of bonds to help finance its $130bn acquisition of Vodafone’s (VOD) 45% stake in Verizon Wireless (VZW).

The $49 billion mega deal eclipses the previous record, set by Apple Inc. in April, when it raised $17 billion to finance its share buyback plan.

The new bonds are rated BBB+, according to Standard & Poor’s, with the 30-year bond priced to yield 6.559%, and the 10-year priced to yield 5.192%. Bonds are also available in three, five, seven and twenty year maturities. Some of the three-year and five-year bonds have floating rates.

So should you take a bite out of the Verizon cherry? David Merkel from Aleph Blog, thinks not.

David says: “Unless the yields are similar to those for BB junk bonds, I would pass on this deal.  The reasons are simple.”

David went on to say: “I am usually a skeptic of big bond deals. It is usually a sign of weak thinking among buyers.  I avoided big deals during 2001-3, and ended up the better for it.”

“So be wary, and avoid Verizon bonds for a time, until the market normalizes.  It looks like the syndicate will stuff the market full, but good.”

FT: – U.S. Treasury keeps eye on bond market liquidity. – U.S. Treasury and Federal Reserve officials are monitoring the liquidity of bond markets after warnings from banks and institutional investors that the system has been weakened dangerously by new regulations.

Learn Bonds: – Evaluating credit market risk vs. return. – In the bond world, the risk of not getting your money back is called credit risk (or sometimes default risk). Credit risk and term risk (the length of your loan) are the two most important sources of risk when investing in bonds.

What Investment: – U.S. bonds heading for third down year since 1980. – Investment-grade bonds in the US are likely to finish 2013 having delivered a negative total return, according to BlackRock’s chief investment strategist for fixed income, Jeffrey Rosenberg.

Gary Gordon: – Should you still desire bond ETFs for your portfolio? – Bond ETFs can reduce overall portfolio volatility. So while it may seem that the two-year stock rally is the only thing worthy of notice, and the two-year 0% return for most bond holdings are unsavory, the next stock market correction of 10%-20% would change those figures in a heartbeat.

TrustNet: – Why you’d be wrong to ditch your bond funds. – A scenario in which the global recovery falters and interest rates are kept at their current levels is just as likely as a sustained period of growth and an end to QE, according to FE Research’s Rob Gleeson.

Income Investing: – Jeff Gundlach still likes agency mortgage REITs. – Speaking during a presentation this afternoon, DoubleLine Capital‘s Jeff Gundlach  was again praising mortgage real-estate investment trusts now that they’re trading at significant discounts to book value following a months-long rout. Gundlach, ever the opportunistic investor, had still been down on REITs not even three months ago based simply on valuation, but now he likes them at current values.

FT: – The power of the bond markets is a bluff waiting to be called. – Advanced economies worried about future financing should issue as much debt as possible.

Financial News: – Chart of the Day: first-timers boost high yield. – Debut issuers are accounting for an increasing share of high-yield volumes, with borrowers previously dependent on the loan market turning to bonds as their loan funding approaches maturity.

Reuters: – Puerto Rico cuts planned debt sales after bond sell-off. – A day after a Puerto Rico bond sell-off pushed yields above 10 percent, the Government Development Bank said on Tuesday it is scaling back bond sales planned for the rest of 2013.

WSJ: – Treasurers favored corporate debt in August. – Corporate treasurers shifted cash holdings out of government debt for the second month in a row, according to August data from Clearwater Analytics.

MuniNetGuide: – Puerto Rico paying dearly for bungled disclosure efforts. – In the case of Puerto Rico, selling seems to beget more selling. First, retail investors were the ones spooked by media reports about the excessive exposure certain mutual funds have to PR paper. Perhaps in response to shareholder concern, some major institutional investors are also panicking out of PR names.

Income Investing: – High-yield default rate drops to 2.8% in August. – While today’s $49 billion bond deal from Verizon underscores the strength of the high-grade corporate bond market, Moody’s reports today that the high-yield market still looks pretty healthy too, with the U.S. speculative-grade default rate falling to 2.8% in August from a revised 2.9% in July and from 3.6% a year ago.

MuniNetGuide: – Detroit’s bankruptcy and pension solution depends more on its planned recovery and rebirth – not just cutting costs. – It’s time to take the fear out of the future for Detroit, according to James Spiotto, Partner and Head of the Special Litigation, Bankruptcy and Workout Group at Chapman and Cutler, LLP.  Preparing Detroit for brighter days ahead is contingent upon a reasonable Recovery Plan, and assuring City employees that there is more – not less – for them if pension payments are adjusted as part of the effort to fund the City’s recovery.

Janney Capital: – Janney’s latest Muni Monthly preview – Taper, a new Fed chief, and war – Oh my! Our advice. – Several factors including the likely but unknown start of the taper of assets purchases, a new Fed Chief and conflict/ potential war in the Middle East are at the forefront of the market’s attention. However, if investors consider events from 1 year, 5 years, 10 years, 20 years, and 30 years ago we think they would agree that uncertainty always exists.