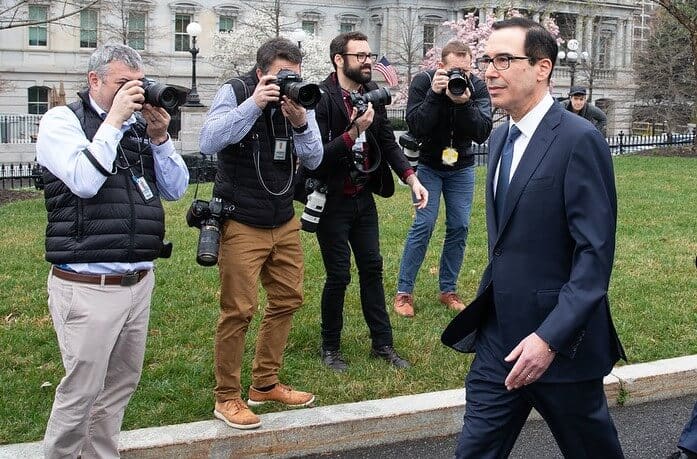 The US has upended global talks on how to tax digital giants such as Google, Amazon and Facebook – and warned European partners it will retaliate if they press ahead with their own plans.

Treasury Secretary Steven Mnuchin (pictured) wrote to his counterparts in the UK, France, Italy and Spain saying the US was pulling out of discussions because they had reached an “impasse”.

The move damages hopes that world trade body the Organisation for Economic Co-operation and Development (OECD) will be able to agree global digital tax rule by the end of the year as planned.

French Finance Minister Bruno Le Maire called the US withdrawal from international talks on digital tax “a provocation” on Thursday.

Mnuchin told finance ministers in Paris, Madrid, London and Rome that they all should all focus on supporting their economies from the harm done to them by the coronavirus pandemic.

“Attempting to rush such difficult negotiations is a distraction from far more important matters,” he wrote in a letter seen by the Financial Times. “This is a time when governments around the world should focus their attention on dealing with the economic issues resulting from Covid-19.”

These four European nations have pushed hard for new digital taxes to be imposed on US Big Tech firms, which they make big profits from their markets but pay minimal taxes.

They want a new deal where digital giants pay taxes based on the size of their sales in each country, rather than shifting profits to low-tax regimes such as Ireland or Luxembourg.

The move comes at a time when European governments are desperate to lift tax revenue after spending tens of billions to support their economies through the health crisis.

But Mnuchin warned that the US would not sit idle if countries imposed new taxes on American digital giants.

US threatens to retaliate if Europe imposes its own taxes

He wrote: “The United States remains opposed to digital services taxes and similar unilateral measures. As we have repeatedly said, if countries choose to collect or adopt such taxes, the United States will respond with appropriate commensurate measures.”

France introduced last year, which imposes 3 per cent sales tax on tech firms who generate more than €750m in sales a year. But it has suspended the charge to see if a deal could be reached at the OECD, which has been working on an agreement that would bind 137 nations.

“It’s a provocation to all OECD partners as we were just a few centimeters away from an agreement on taxing digital giants,” Le Maire told France Inter Radio.

He added: “Whatever happens, we will apply a tax on digital giants in 2020 because it is a question of justice.”

Britain has agreed a tax on digital firms with global sales exceeding £500m, and at least £25m worth of UK sales. These firms must pay a 2 per cent tax on their British revenues.

Italy, Spain and Turkey and as many as 40 countries have all drawn up plans for their own digital taxes.

US trade representative Robert Lighthizer told the House of Representatives on Wednesday that the talks were “making no headway”.

Lighthizer added: “We need an international regime that not only focuses on certain sides and certain industries, but where we generally agree how we’re going to tax people internationally.”