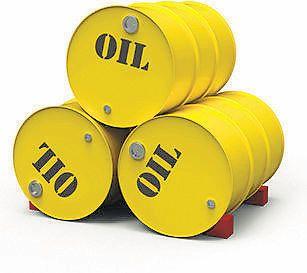 The United States Oil Fund LP (ETF)   will open lower on Wednesday morning as the world worries, once again, about having too much oil on its hands. The American Petroleum institute on Tuesday reported that oil inventories have increased by 2.8 million barrels in the week ended June 9.

The United States Energy Information Administration will release its report on inventories later on on Wednesday. If its numbers match up with those of the American Petroleum institute traders may push the price of oil, and therefore the United States Oil Fund, down even further.

Oil inventories are used to shed light on how supply/demand is working out in the oil market. If oil is being stored in inventories that means, by definition, it’s not being bought. If supply is greater than demand the market isn’t clearing and the price of the world’s most important energy source has to fall. What the magnitude of that fall is depends on how traders think this number will change in future.

So far in 2017 the United States Oil Fund LP (ETF)   has fallen by more than 18 percent on fears that the deals being made at OPEC aren’t enough to keep the price of oil low. The United States, which has a huge untapped reserve of oil, has become an important swing producer.

The price of oil extraction in North America is much higher than in the Middle East or Russia. That means that a lot of production in the US fluctuates with price. Traders are worried that technology is making the cost of extraction. That would lower the short/medium world price ceiling.

A guideline cost of production in the US is at $45 per barrel. At time of writing a barrel of WTI crude was selling for $46.18. That means that rising inventories may not have much room to depress prices further.

The International Energy Agency, in a report released on Wednesday, says it expects the oversupply in the oil markets to remain in place for the rest of 2017. That appears to be down to Organization of Petroleum Exporting Countries. OPEC caused prices to spike in the past as markets put faith in a deal it made to curb production.

The black liquid is still flowing out of OPEC countries, however. Traders across the planet are losing faith in OPEC’s ability to control its members.

Oil is one of the world’s most heavily traded commodities. The futures market is used to hedge costs in a myriad of industries. Low prices can be a boon to consumers as prices fall, but cause big problems for producers. The OPEC nations have tried to reduce production, but the results are mixed.

The United States Oil Fund LP (ETF)   has lost more than 70 percent of its value over the last five years as the US proved to have seemingly unlimited reserves in the ground. The country’s lower than expected costs of production has caused the fund to lose almost 20 percent over the last twelve months.