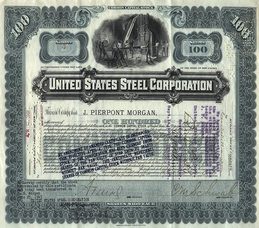 When scouring the lists of recently issued corporate bonds, you will notice a whole host of familiar names.  The list includes GE Capital, Bank of America, Capital One, Citigroup, Medtronic, NBC Universal, Prudential Financial, and U.S. Steel.  In this article, I would like to take a closer look at the recently issued eight year notes belonging to the one company in the bunch that has a non-investment grade rating on its new debt—U.S. Steel.

United States Steel Corporation’s newly issued eight year notes, CUSIP 912909AJ7, mature on April 1, 2021.  They have a 6.875% coupon and pay interest semiannually on April 1 and October 1 of each year, beginning October 1, 2013.  The notes are senior unsecured and have B1/BB ratings from Moody’s and S&P respectively.

Furthermore, the size of the offering was $275 million, and the underwriters for the deal, also known as the joint book-running managers, were J.P. Morgan Securities LLC, Barclays Capital Inc., Goldman, Sachs & Co., and Morgan Stanley & Co. Incorporated.  J.P. Morgan Securities underwrote $110 million, and the remaining companies each underwrote $55 million.  The trustee for this U.S. Steel note is The Bank of New York Mellon.

The Prospectus Supplement (to the Prospectus dated February 15, 2013) outlines the call and put features on this security, which include the following:

Additionally, there is a change of control offer included in the Prospectus Supplement.  Should a “Change of Control Repurchase Event” occur, U.S. Steel will be required “to make an offer to each holder of the notes to repurchase all or any part (in excess of $1,000 and in integral multiples of $1,000) of that holder’s notes at a repurchase price in cash equal to 101% of the aggregate principal amount of the notes repurchased plus any accrued and unpaid interest on the notes repurchased to, but not including, the date of repurchase.”  For more details on the change of control offer, please read the Prospectus Supplement, linked above.

If you are looking for a high-coupon, high-yield bond that isn’t trading wildly over par (yes, at the time this article was written, it was already trading over par), this is a security to consider.  Of course, in today’s ultra-low interest-rate environment, some investors may be leery of high-yielding, non-investment grade bonds.  And perhaps for good reason.  There are risks associated with purchasing U.S. Steel’s newly issued 6.875% coupon notes.  Some of the risks outlined in the Prospectus Supplement include:

Moreover, keep in mind that changes in credit ratings and changes in broader-market corporate bond spreads can adversely affect the price of the notes.  And, of course, adverse changes to the company’s business can negatively affect the ability of U.S. Steel to make good on the terms of any of its notes.  The March 20, 2013 Moody’s Rating Action on U.S. Steel provides some color into the company’s near-term outlook:

First, Moody’s notes U.S. Steel’s “good liquidity position” and that “operating performance will benefit over time from the January 2012 sale of the U.S. Steel Serbia (USSS) loss making subsidiary and the recent declining trends in raw material prices, particularly iron ore and coking coal.”  But at the same time, Moody’s noted several challenges, including the compression on realized steel prices, weakness in European markets, and overcapacity and “steady but relatively soft demand” in flat rolled steel.

As investors know, there are risks associated with any investment.  It is important that you do your own due diligence on United States Steel Corporation’s financial profile in order to compile a more complete picture of the company’s health and future prospects of meeting the terms of the notes outlined in this article.  Only you can decide if taking the counterparty risk associated with any individual security is right for you.