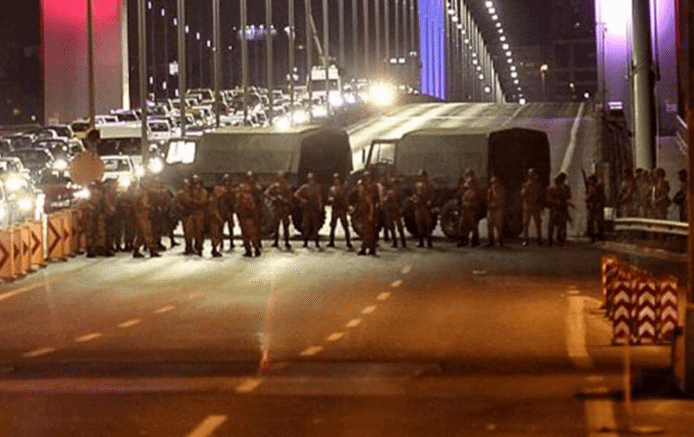 An attempted military coup in Turkey, which begun less than 24 hours ago, has reportedly resulted in at least 1 unarmed soldier being beheaded & thrown off a Bosphorus bridge in Istanbul. The soldier was beheaded by Erdogan supporters.

The leader of the AKP Party, & President of Turkey, Recep Tayyip Erdogan, said (while the coup was ongoing) that “plotters will pay a heavy price” & these killings are in line with his statement. When reports emerged that a coup against his government was occurring, he ordered his supporters to go onto the streets.

According to an article recently published on the Daily Mail, senior participants of the coup have landed in Greece (this morning), seeking asylum. The article gave further details, reading “The Greek police ministry said a Turkish military helicopter landed in Greece this morning and eight men on board, thought to be senior coup plotters, have requested political asylum. Turkey has asked for the men to be extradited back to the country.”

Unrest is Not Over in Turkey, Erdogan Requests Further Support

Via a tweet, he encouraged his supporters to continue to take to the streets, & stop any anti-Erdogan forces from taking control. Specifically, the tweet read “We should keep on owning the streets no matter at what stage because a new flare-up could take place at any moment.’

Erdogan is a controversial leader, supporting Islamist extremist groups Syria (it has even been reported that his government has purchased oil from ISIS.) In March 2016, his government blocked Twitter & Facebook, & some reports have emerged that social media may have been blocked or limited during the coup.

The recent events have slashed the AKP’s legitimacy to rule Turkey, & the brutal executions of captured soldiers will only worsen the situation. Images of the killing & beheading are currently circulating on social media sites, such as Twitter.