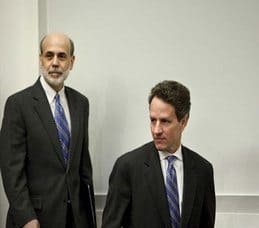 The Treasury is part of the executive branch of the US government. As such, they must follow the direction of the President of the United States. The Federal Reserve is independent of the executive branch, almost like the Supreme Court.  The voting members of the controlling body of the Fed are nominated by the President and approved to 14 year terms. The goal is to limit the impact of short-term politics on decisions about the money supply. Specifically, there is a concern is that if  the Federal Reserve was not independent, politicians would seek to obtain short-term economic growth through expanding the money supply, at the cost of long-term inflation.

What are the responsibilities of the Federal Reserve?

The Federal Reserve is often talked about as the Government’s and The Banker’s Bank.  Its responsibilities include:

Once the expenses of the Fed are paid any remaining money is paid to the US Treasury.  The Federal Reserve is actually very profitable as it receives interest on the trillions of dollars in treasuries and other types of bonds it holds in its portfolio.

What are the responsibilities of the US Treasury?

The US Treasury is similar to the finance and accounting department at a public company.  It is responsible for managing the government’s finances.  Its responsibilities include:

How do the responsibilities of The Fed and the US Treasury Overlap?

As you can see from the above the responsibilities of the Fed and the Treasury overlap in many areas.  Both have the responsibility of supervision of the banking system and maintaining the stability of the financial system as a whole.  They are at the center of the US Economy with the US Treasury responsible for the day to day financial activities of the US Government, and the Fed responsible for the overall smooth functioning of the economy as a whole.

Have a question about the treasury or the Fed the we didn’t answer?  Leave a comment below and we will be happy to respond.