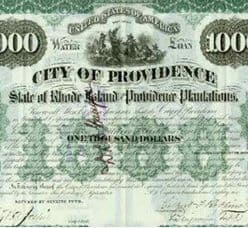 The municipal bond market keeps on shrinking, official Fed data shows that the Municipal Bond market in the U.S. shrank to $3.686 trillion in the third quarter, down from $3.721 trillion in the second quarter, the smallest level since the end of 2009.

Individual investors held just $1.64 trillion in bonds in the quarter, the lowest amount since the final quarter of 2006 and less than the $1.67 trillion they held in the second quarter, according to the report.

Along with selling off individual bonds, they also fled municipal mutual funds. The funds dropped $81.9 billion worth of bonds in the quarter, the largest amount shed on records going back to 1976.

The reason for the drop is well documented, especially if you you’re a regular reader. Munis have been out of favour ever since the Fed announced the possibility of “tapering” back the amount of bonds it purchases as part of its Quantitative Easing program. Add to that Detroit’s bankruptcy and the ongoing problems in Puerto Rico, and there’s small wonder investors are abandoning munis.

However, while cases like Detroit make the evening news, defaults among municipal bond issuers remain rare. On average, the municipal bond default rate is less than 1%–far lower than the rate for corporate bonds.

But if you want to take advantage, you don’t have long to act according to George Rusnak, director of fixed income for Well Fargo. “The below-average interest rates we’ve been experiencing ever since 2008 are not going to last forever.” says Rusnak. “For one thing, despite the small uptick in rates this year, we are still significantly below the 50-year average.

“Therefore, you have to plan for the inevitable rise in rates. Our view is they will probably continue to creep up.” If this is the case, all bonds- not just munis- would to see a corresponding decline in value. Rusnak offers these 4 tips for navigating the muni bond market.

News and Tribune: – Kentucky bond ratings come back from agencies. – Bonds that will be sold to help finance Kentucky’s portion of the Ohio River Bridges Project were rated just above junk status.

NewsLanc: – Why should investments in municipal bonds differ from corporate bonds? – Let those who invest municipal bonds take the same caution as those investing in corporate bonds. Let them understand that if worse comes to worse the municipality or public authority can and will enter bankruptcy procedures and the court will endeavor to reach a remedy that is fair to all parties.

WSJ: – Deluge of muni debt on tap. – U.S. municipalities are rushing to borrow money in the bond markets by the end of the year, aiming to get cash in hand while interest rates remain low. Municipalities have teed up about $10 billion of new debt sales for the coming week, including large offerings from the New York State Thruway Authority and toll-road finance entities in Kentucky and California.

MarketWatch: – Why your muni-bond fund is in a sorry state. – If you were a retiree living in Virginia, and someone recommended that you buy a “Virginia municipal bond fund,” you might conclude that all the money you sank into the fund would be invested in bonds issued by Virginia state and local governments. You’d be reaping that tax-free bond income right close to home. A totally reasonable conclusion—and, it turns out, totally wrong.

Learn Bonds: – When investing play the hands you are dealt. – In recent weeks, I’ve written a series of articles outlining various asset-allocation models. The models were geared toward investors nearing retirement with $1 million to invest. Of course, concerning asset allocations, there are countless variations investors can create.  Investment objectives, time horizons, and risk tolerances will help shape allocations. Additionally, the market environment in which we live will also play a role in shaping allocations. As I mentioned in, “A Conservative Asset Allocation For Income-Focused Investors”.

WSJ: – Treasury bonds hurt by jobs data; 10-Yr yield above 2.9%. – U.S. Treasury bonds sold off as the latest employment report heightened concerns the Federal Reserve may pull back its monetary stimulus as soon as this month.

Morningstar: – How do you approach emerging markets? – One of the most surprising data points in Morningstar’s monthly asset-flows data during the past few years has been investors’ appetites for emerging-markets equity funds.

The Telegraph: – Why the ‘Great Rotation’ from bonds to equities never took off. – What has become clear this year and will continue to be so in 2014 is that the choice between stocks and bonds is not an either-or decision.

BusinessWeek: – Gross unheeded by Japan seeing disinflation buoying bonds. – Honed by 15 years of falling consumer prices that burnished the appeal of fixed-income assets in Japan, the Asian nation’s bond buyers are amassing long-term Treasuries as disinflation emerges in the U.S.

TheStar.com: – Why ‘taper terror’ is frightening investors. – That’s what the U.S. media is calling the growing fear among investors about what will happen when the Federal Reserve Board starts reducing the amount of money it is pumping into the economy.

4Traders: – Vanguard reopens two bond funds, limits growth in capital opportunity fund. – Vanguard has reopened Vanguard High-Yield Corporate Fund and Vanguard Intermediate-Term Tax-Exempt Fund to all investors, effective immediately. The $16.1 billion High-Yield Corporate Fund, which is managed by Wellington Management Company LLP, was closed in May 2012. The $33.7 billion Intermediate-Term Tax-Exempt Fund, a municipal bond fund that is managed by Vanguard Fixed Income Group, was closed in February 2013. In both cases, Vanguard acted pre-emptively to address concerns that continued asset growth in the funds could harm the interests of current shareholders.

CNN Money: – Bonds: Tweak your mix in 2014. – A strengthening economy is usually bad news for bonds. Sure enough, when long-term interest rates rose 1.3 points from May to September, the average bond fund slumped more than 4%. The good news is that much of the rate pain is already baked in for 2014. Ten-year Treasury yields are expected to climb more modestly, by 0.7 point next year.

MarketWatch: – As rates rise, don’t give up on bond funds. – Bonds are a critical part of most retirees’ nest eggs – and now is not the time to be scared of them.

Chicago Tribune: – Bond funds end bad year with another headache: tax-loss selling. – As the calendar closes down on 2013, many U.S. money managers are finding themselves in an unfamiliar position: selling some of the bond funds that have long been mainstays of their clients’ portfolios.

Kiesel: US consumer improving. Household net worth up > +10% annually or $14.2 trillion in past 2 years, according to today’s Fed data.