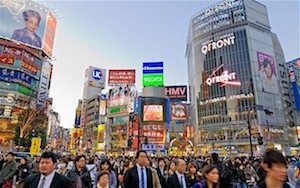 There are all sorts of reasons being offered as to why long-term rates are seemingly ignoring the end of Fed monetary easing and ignoring the prospect of Fed rate hikes as early as next year (if you believe the rumors).  When it comes to forecasting and rationalizing, most bond-market pundits should have lost all credibility in recent years.  That’s what happens when so-called experts are consistently wrong more than five years in a row.  When trying to understand what is going on in the world of Treasuries, instead of listening to the noise (there’s lots of it), I think it’s worth focusing on the big picture.

The Big Picture
When the Federal Reserve kicked off the current era of monetary easing by cutting the federal funds rate 50 basis points on September 18, 2007, it kick-started the Japanification of the U.S. bond market.  Naturally, policy makers and economists will come up with all sorts of reasons the U.S. experience is not like Japan’s.  But those reasons seem more designed to distract from the facts or to help people rationalize their own hope of what the future will look like.  You will be distracted with all the differences in policy decisions between the Fed and the Bank of Japan.  You will be distracted by those who will discuss the deflationary experience in Japan.  You will be distracted by those who say Japan’s experience spanned decades while the U.S. experience has not (give it time).  The bottom line, however, is this:

For nearly six years, the federal funds rate has remained close to the zero-bound.  During that time, benchmark bond yields have remained at or near historically low levels.  Despite five years of improving economic data, the Federal Reserve has still refused to raise its target rate.  The reason for this is that the U.S. economy is structurally weak and highly dependent on cheap financing and rising asset prices to spur the little growth it currently has.  The U.S. bond market is living through an experience similar to Japan’s.

Keep in mind that bond yields will jump around and perhaps even experience noteworthy moves to the upside.  From time to time, the same thing occurred in Japan.  Additionally, at some point, the Federal Reserve is likely to address criticism regarding its failure to raise rates by attempting a rate-hike cycle.  Even the Bank of Japan raised rates, only to eventually return to its QE days of old.

Thus far, the Treasury market shows very little concern about the Fed initiating any kind of sustainable rate-hike cycle.  And for good reason.  Given the U.S. economy’s dependency on cheap financing, a Federal Reserve rate-hike cycle will put disinflationary and deflationary pressures on the economy.  At some point, the Fed may decide to flex its muscles in an attempt to get the bond market to listen (the bond market currently seems uninterested in overtures about rate hikes in 2015).  But given the Japanese bond-market experience the U.S. seems to be emulating, Fed governors would be wise to pay attention to the message the Treasury market is sending.  Talk is cheap.  Show us you mean business by raising rates.  Then you’ll really get our attention.  In the meantime, when attempting to understand movements in benchmark bond yields, investors should ignore the noise and focus on the big picture.