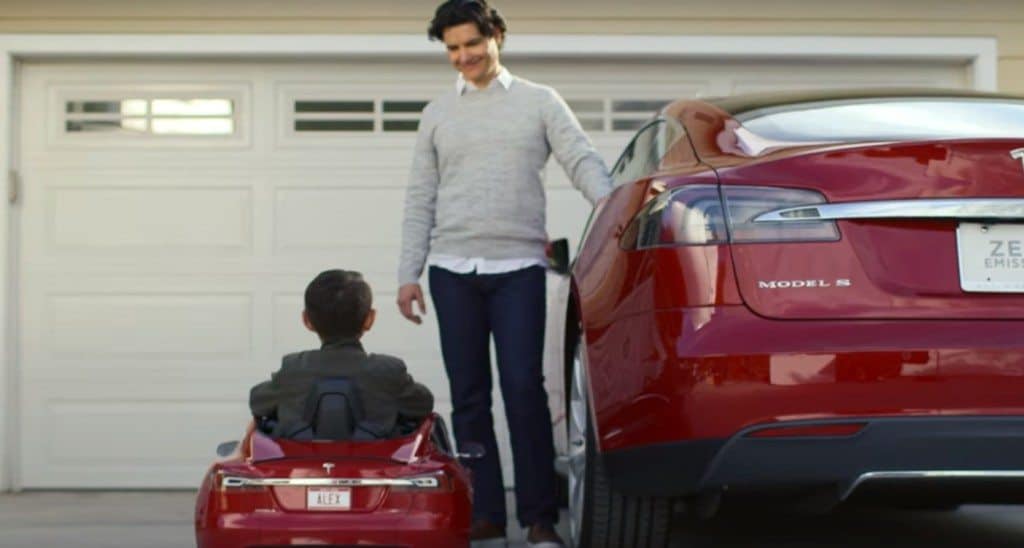 A few months back, Tesla Motors Inc along with kids’ toy maker Radio Flyer teamed up to produce a toy version of the Model S. The luxury electric car maker understands more than most that the kids of today are the Tesla buyers of tomorrow. As such, Tesla decided to give children the chance to be a part of the Tesla experience, long before they are even due to get their driver’s licenses.

Tesla gets them while they’re young

The scaled down Model S for Kids is more or less a tiny replica of the world’s best selling luxury EV. If you ignore the fact the your child’s upper body sticks out the top like with most go-karts, the similarities between the toy and the real deal are quite convincing. It is directed at kids between the ages of three and eight. However, it has a lot of the qualities you would expect to find in a normal life-sized car.

It has sound systems which can be used via AUX connection. The car comes in appealing Tesla Model S colors like Blue Metallic and Red Multi-coat. True to life-sized role model, the Model S for Kids is powered by removable battery packs. The toy replica also has a front trunk, or “frunk”,

Tesla recently announced that it will be offering kids a chance to test drive the Model S for Kids at its stores in order to help promote the toy on behalf of Radio Flyer. The test drives will surely see kids having a great time while they whiz around the test track in Tesla-like style and luxury.

However, it doesn’t take a genius to notice the clear play at giving kids a taste of Tesla. The EV giant aims to convert kids into EV enthusiasts well before mainstream perceptions get a hold of them. If you had a poster of a super car in your room as a kid, this is more or less what Tesla is trying to achieve as well. You would have a hard time right now finding a child with an image of an electric car up their wall. This isn’t because EVs aren’t at all appealing — Tesla has proven this false over and over — but because perceptions are still changing. With the Model S for Kids, Tesla is only hurrying things along, “getting them while they’re young,” if you will.

The toy car presents itself as a progressive and fun learning experience for children. “Tesla has partnered with Radio Flyer to usher in the next generation of electric vehicle owners,” the company wrote.

“At the event, your little one will have the chance to experience the Tesla Model S by Radio Flyer in our mini-test drive track alongside future owners and like-minded enthusiasts.”

Another aspect that is true to the Tesla experience is the waiting period involved. You’d have to wait almost as long as you would had you ordered a real Model S, says Electrek. The toy car is already sold out through to July. Also similar to the actual purchase of a car, the Model S for Kids has a starting price that goes up according to the add-ons you want. You are able to customize your child’s ideal online at Radio Flyer’s design studio.

The Model S for Kids goes for $500 at standard.