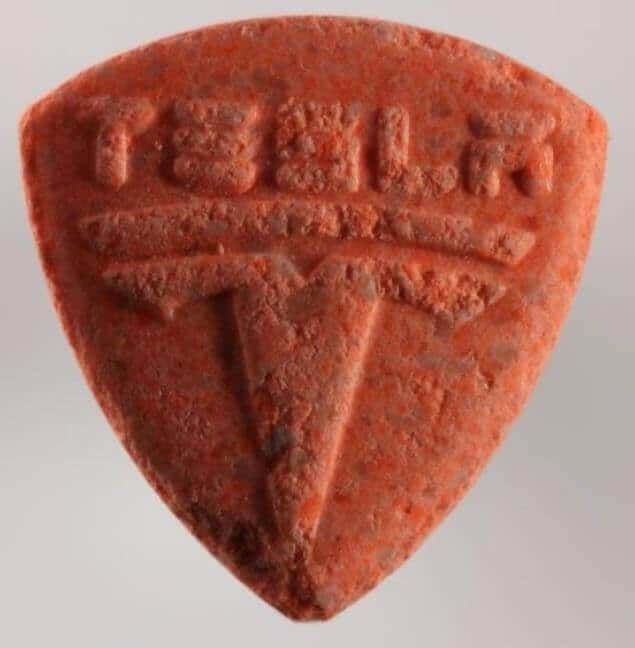 The Tesla Motors Inc brand has become so strong and popular that it is being placed on pills. Tesla-branded pill is getting around the club scene spreading from the UK to Germany. The pill contains 240 mg of MDMA, and that is a potentially deadly strength.

MixMag and The Drive spotted the warning issued by The Loop. The warning states that this Tesla-branded pill has twice the dose what a person would need to get high, says a report from Jalopnik. “High strength Orange Teslas tested by The Loop at UK festivals & Safer Party in Zurich – c.240mg MDMA – take care,” tweeted the Loop.

Twice as destructive as normal pills

The Loop – a UK non-profit that warns of dangerous drug outbreaks and strives for a safe nightlife – carries independent testing of different pills. This pill, which has the brand name of Tesla, is strong enough to get a “take care” warning of “extremely high doses.”

Safer Party – a German drug research group – experimented with some pills and discovered that the pills contained more than 230 milligrams of 3-4-methylenedioxy-methamphetamine, which is more commonly called MDMA. Since ecstasy is against the law, therefore, the strength of a dose is usually unregulated. However, the results from a popular consensus among users and the testing service EcstasyData suggest that an average pill contains anywhere from 80 to 120 milligrams of MDMA, notes a report from Inverse.

Most likely, such a high dose is overkill; however not too literally. Even if the dose in the Tesla-branded pills are high enough that organizations such as The Loop and Safer Party are warning the people about the dangers of taking the Tesla Motors Inc pills, deaths from pure MDMA  are rare, says Inverse. Due to how dehydrated the users can get while taking the drug, deaths could happen, but several occur because of other substances added in the pill.

Stay away from this pill carrying Tesla brand logo

Tesla logo pill is a new mix of dangerously strong MDMA that is so potent that the person would need a self-driving car to get back home safely after taking it. This orange ecstasy pills adorned with the Tesla logo are twice as strong as normal pills, and have been around since at least this summer. Obviously, the pills are not actually affiliated with the electric car making giant.

Someone probably thought that having the brand of the world’s largest electric carmaker on the trip-inducing pills would be a nice touch. So, if you are ever visiting a dark shady club, and someone comes towards you and asks you if you’d like some Tesla Motors Inc , then you better say no. Do not be appealed by color, which is orange, as it is not the kind of purchase you would want to take home with you.