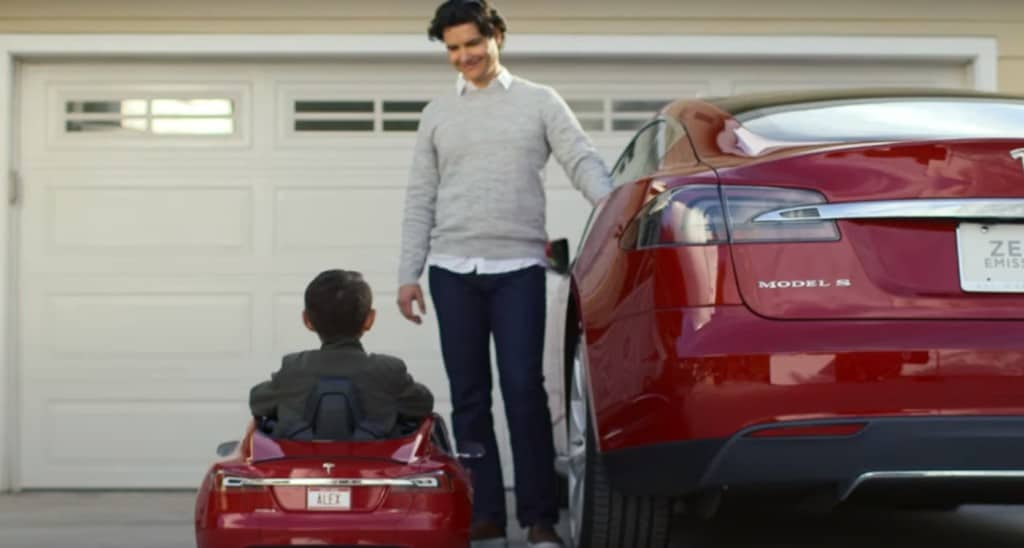 Tesla Motors Inc has teamed up with famed kids toy maker Radio Flyer to build an amazing kid-sized replica of a working Model S.  Tesla was in the news last Friday when Actev Motors unleashed a new Arrow-Smart-Kart with comparable features in a Model S. The Smart-Kart has a $600 price tag and it offers a top speed of 12-miles per hour, collision sensors, smartphone app, geo fencing, overnight charging, and an optional supercharger. With all the features in the Smart-Kart, it doesn’t take a rocket scientist to know where Actev Motors got its best ideas.

Now, Tesla doesn’t want to be the firm that inspires a Go-Kart for kids and the firm has decided to set the records straight by unveiling a Model S just for kids – and it does look like a Model S and not a Go-Kart. Tesla Motors has never ignored the fact that kids today will grow to become adult buyers tomorrow and the firm has been trying to endear kids to its brand. Last year, Tesla Motors made a miniature Model S car that sold for $1.

The Verge reports that Tesla Motors and Radio Flyer have teamed up to build a “Model S” for kids. The Model S for Kids is a scale model of the best-selling electric car designed for children between the ages of three and eight. The main selling points of this Model S include the fact that it comes in “authentic Tesla Model S colors” such as Red Multi-coat and Blue Metallic. It has working headlights, a “frunk”, and a sound system with an Aux cord.

However, the Model S for kids doesn’t have much going for it except its looks and its $500 price tag. Its speed tops out at 6 miles per hour and it lacks safety features such as collision sensors and geofencing. It seems that Tesla Motors is more interested in having kids develop a bond with its brand instead of getting them to zoom around in Go-karts that doesn’t look quite as grand as a Model S.

Tesla Motors Model S is a well-made car, consumers are madly in love with the car, and Tesla can’t seem to make them quite as fast as it sells them. Gas2 reports that Tesla’s Model S outsold premium sedans such as BMW 7 Series, Porsche Panamera, Audi A8, and Mercedes S Class in 2015. The Model was introduced to the market about three years ago but it is already leaving luxury cars from traditional automobile in the dust because of its high build quality.

Model S sales increased by 51% in 2015 but the sales of the aforementioned traditional car brands were down in the same period – Tesla also outsold Jaguar and Lexus. Tesla sold 24,202 units of the Model S in 2015 while Mercedes sold only 21,934 units. From the sales record, it is obvious that Tesla Motors is crushing the premium luxury car market, Tesla might dominate the market once ramp improves for the Model S.

However, traditional automakers are not taking things lying down and they have expressed their interest about getting into the EV market. Porsche in particular is leading the charge against Tesla because it has pledged $1.5B to build the Mission E that might beat the Model S in performance, mileage, and design.