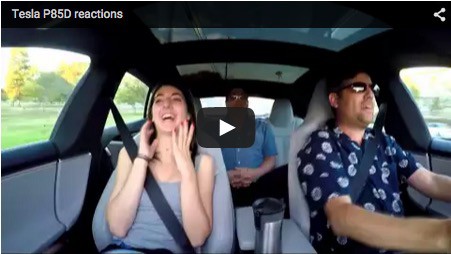 Tesla Motors Inc (NASDAQ:TSLA) released a major new update to its Model S in November of last year. It wasn’t the 15 percent bigger battery in the low-priced Model S that really surprised users, it was the “Insane Mode” of the $105,000 Model S P85D. Here’s a look at what it’s like to get a ride in one of those.

Insane Mode brings a the Model S from 0-60mph in 3.1 seconds. You read that right. It puts the acceleration of a high end sports car inside a Tesla Motors EV, and it’s become a cultural phenomenon in its own right. The above video is just one of many across YouTube, and they’re likely to keep piling up as long as the P85D keeps selling.

Tesla Motors plans to sell 55,000 cars this year, and with Insane Mode videos still a popular way to while the hours away it’s no wonder. The video above comes from Reddit user u/OrenPeli, one of the lucky owners of the high performance Model S.

With the sheer speed of the car, it’s no wonder it’s selling so well. The Tesla Motors Model S commands a premium, and the Model S P85D commands a greater one. The low-end Model S gets to 60mph in a comparatively lethargic 5.2 seconds. The Model X, Tesla’s coming SUV, will be able to go from 0-60 in less than that.

In February of this year a rumor, sourced from the TMC forums, said that the Model S P85D would get a firmware update that would allow it to go from 0-60 in 2.8 seconds. That never arrived, but Tesla did boost acceleration from 3.2 seconds to 3.1 seconds earlier this year.

Why does Tesla want an Insane Model S?

Tesla Motors doesn’t spend money on adverts, because the firm knows that if it plays its cards right it can get people to advertise its car for it. Videos like the above Insane Mode reaction piece are all over the internet, and they show the power of the Tesla brand. Tesla wants to be known not just for innovation, but for performance, and Insane Mode is its way of showing just what an EV can deliver.

In a 2014 survey Consumer Reports found that Tesla Motors was one of the five best-appreciated brands in the auto world. The firm scored highly on innovation, but didn’t break the top five on design or value for money, and it only came in fourth in terms of fuel economy. Elon Musk and the rest of the execs selling the Model S want to change that.

Insane Mode sells the idea that the Tesla Motors Model S is not just a great car for the environment, it’s a great car to drive. Those with a need for speed aren’t likely to get from 0-60 in 3.1 seconds in any other car at that price point, and Tesla wants the world to know that.

The glut of Insane Mode reaction videos shows that in stark light. People want to show off that their car is fast, and if you watched the video above you’ll know why. Try having more fun than shocking a bored passenger with the rip-roaring Insane Mode in a brand new Model S. If you can manage it, you might want to put a video of how you got there on YouTube.