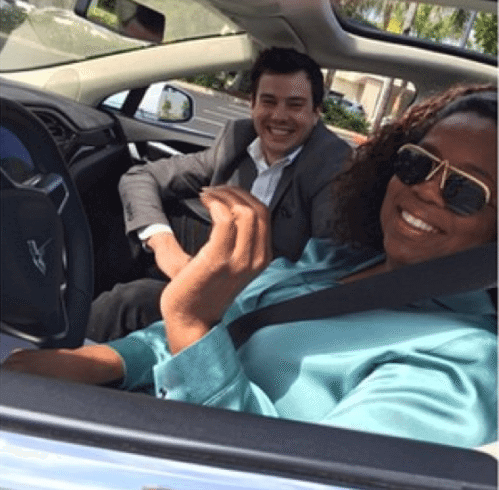 Tesla Motors Inc is doing a great job of keeping its customers satisfied and the firm just landed another high-profile client in the person of Oprah Winfrey. Fortune reports that Oprah Winfrey is the latest satisfied Tesla customer after she posted a number of tweets when she test-drove a Tesla yesterday. Oprah’s endorsement of Tesla confirms the quality of Tesla’s high rating on the Consumer Reports last week.

Oprah Winfrey posted a picture of herself in a white Tesla with a tweet saying, “Test driving my new Tesla with dealer Dan. Love it!! https://t.co/LHLroJ6Acl“. Tesla has maintained that it does not spend money on advertising its cars and that it relies on word-of-mouth from satisfied customers to push sales. Oprah Winfrey is a celeb with a large audience and her endorsement of Tesla could help the firm in its push to become a mainstream carmaker.

Oprah Winfrey who once hosted “The Oprah Winfrey Show,” is an influential voice with the American people. When she talks, people listen and her views on household finances have a large impact on businesses. Spokesman notes that ‘her stamp of approval could turn a little-known product into an instant craze. Her power over book sales is legendary.”

The power that Oprah wields in bringing lesser-known brands to limelight has been dubbed “The Oprah Bump” as she influences spending decisions. Susan Harrow, a media coach and author says, “Nobody else has that kind of influence… A mere mention could turn a small business owner into a millionaire overnight”.

Tesla has been gradually increasing its reach in the U.S. automobile market as it plans to deliver between 50,000 and 55,000 electric cars in 2015. The Model S had made its mark in the market as it scored 103 out of 100 on a consumer ratings report.

The upcoming Model X is being touted as everything you can dream of in an SUV and more. Tesla will start shipping out the Model by the end of this month and the firm has already recorded $1B in Model X orders.

The mass-market Model 3 is also in the works and the firm expects to have the affordable EV on the road by 2017. One car at a time, one satisfied customer at a time, one word of mouth recommendation at a time – Tesla is increasing its appeal and the firm is on the way to displacing ICEs with its EVs.