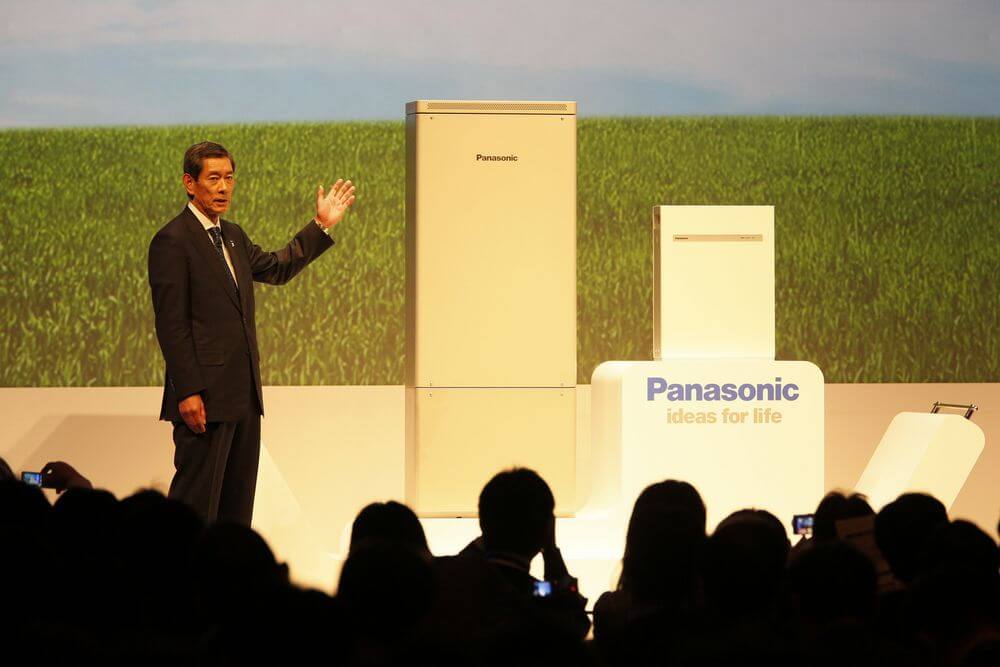 Tesla Motors Inc (NASDAQ: TSLA) CEO Elon Musk doesn’t shy away from grandiose statements about the future and his impact on it. The executive was no different on Thursday when he announced what he described as a fundamental “change [in] the way the world uses energy on an extreme scale.”

The Tesla Motors Powerwall isn’t a new idea, but that doesn’t mean the company can’t change the world. The picture above shows Shusaku Nagae, President of Energy Solutions Company and Senior Managing Executive Officer of Panasonic Corporation (TYO:6752) at a 2012 presentation from Panasonic, Tesla’s battery partner.

The Japanese company is currently building the Gigafactory with Tesla, but it was already making long lasting home energy storage batteries like the Powerwall way back in 2012.

In February of 2012 Panasonic announced mass production of long life lithium batteries especially for energy storage in European homes. The Power Station had a capacity of just 1.35 kWh, and looked more like a fridge than a Tesla Energy Powerwall, but the company was certainly there at the start of home energy while Elon Musk was busy filing papers for the Tesla Motors IPO.

Just because Tesla Motors wasn’t the first to create a home energy solution doesn’t mean the company shouldn’t command attention. What Tesla Energy is doing may be greater than anything that Panasonic did with the Power Station. As with the electric car, Tesla’s power is in making people care about these technologies.

Tesla is Apple, not Xerox

As with all of the Windows tablets that came before the iPad and the graphical user interfaces that came before Windows and OSX, critics are likely to use evidence of the Panasonic Powerwall to discount the value of Tesla Motors’ contribution to home energy storage.

The Tesla Energy Powerwall isn’t just a technical upgrade over the Panasonic Power Station, it’s philosophically distinct. While Panasonic shunted the battery at the already prominent German market and let it sit, Tesla Motors has the power to put it in front of the world and, as Global Equities Research analyst Trip Chowdhry pointed out, even get it running in Wal-Mart.

That is Tesla’s contribution to the world, and it’s arguably more important. The electric car had been invented and improved on many times over the years, but it took the Tesla Motors Model S for people to look at the vehicle and think “I want one.”

Home batteries have been around forever, but it may take the Powerwall for people to consider getting their hands on one. That’s what Elon Musk can give to the world. The initial reaction from opinion makers like tech website C-net is good, so things look bright for the Powerwall and the future of home energy.