During a speech in December of 1996, then Fed Chair Alan Greenspan uttered the somewhat immortal phrase “irrational exhuberance” while discussing asset values and the historical role of central banking. Although the context of his comment did not specifically reference 1996 stock valuations, investors inferred from the statement that Greenspan thought equity assets were overpriced.

And who could blame him for thinking that at the time. The S&P 500 Index, America’s most popular measure of equity performance, had gained 50% in two years. While equity markets sold off briefly as a result of Greenspan’s 1996 comments, stocks, nonetheless, raced robustly higher for three more years. 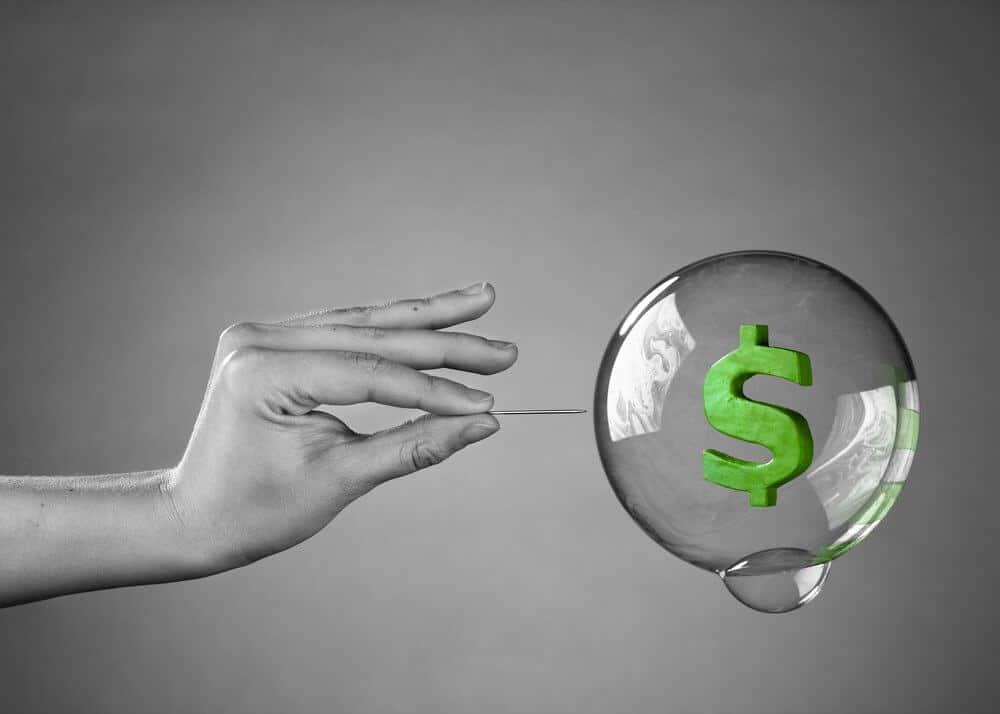 By Spring of 2000, the height of what is now known as the tech bubble, stocks were collectively worth more than 3X what they were valued at the start of 1995.

As reality set in on investors, stock prices dropped with vengeance. Businesses with flimsy models quickly sold off, with many falling into bankruptcy as equity and debt markets could no longer be tapped for working capital.

The History of Asset “Bubbles”

Bubble has become a popular descriptive for any asset containing questionable valuation properties, panic buying, or unreasonable scale. History is littered with many episodes of frenzied buying or acquisition activity, with the 17th Century Dutch “Tulipmania” widely pointed to as the first known asset boom and bust.

While there seems to be no common definition, the term bubble infers substantial downside valuation risk. After the tech bubble burst in 2000, the Nasdaq Composite Index lost over 80% of its value before it finally bottomed out.

Today, market watchers have become exceedingly liberal with the usage of the term. Due to perpetually low interest rates that have caused investor gravitation to both bonds and dividend stocks, some strategists see a bubble in both of those assets. Others see a bubble of credit in general, with more than reasonable leverage existing around the world.

Are we looking at another tech bubble?

Which brings us full circle to tech stocks. There, the landscape is exceedingly bifurcated. Stocks like Cisco Systems , Intel and Microsoft Corporation were three highly prized stocks to own 15 years ago, and possessed stratospheric earnings multiples as a result.

Today, Microsoft is generally the only one looked at even remotely with valuation skepticism. Cisco, although it has had a nice run over the past few years, has been seen mostly as a cash-cow value stock as opposed to a company with dramatic growth prospects.

The FANG stocks – namely Facebook Inc. , Amazon.com, Inc. , Netflix, Inc. , and Alphabet Inc. , have taken over as the poster children for a new era of tech growth stocks. They clearly aren’t the only Internet stocks out there, but they are the ones garnering the most attention.

However, Facebook and Alphabet, in particular, certainly are not trading at multiples anywhere near as salty as what we saw during the Y2K tech bubble. Consequently, Amazon and Netflix take the cake as the “frothier” of the FANG space.

Clearly, both of those stocks possess valuations that are looking substantially into the future, despite both showing awesome signs of growth.

Without widespread signs of panic buying or valuations across the board reminiscent of the late 90s bubble, I’m having a hard time necessarily justifying secular irrational exuberance here. Pockets – Yes. Widespread – No.

Still, tech stocks are vulnerable. If, for example, Amazon experiences poor YOY holiday shopping sales this year with an evidentiary slowing of growth, investors won’t likely be very forgiving. How unforgiving might be predicated on the extent of the disappointment and how the rest of the market is behaving at the time. Remember, the higher the valuation multiple, the greater the general downside price risk you may be taking.

Meanwhile, I’d argue that much of the rest of the market is vulnerable as well, given the valuation plateau on which stocks currently sit.

To conclude, irrational exuberance, to the extent it existed in the late 90s, is not apples-to-apples representative of today’s tech sector. Not all stocks are selling with the stratospheric multiples of the late 90s, and the day to day price volatility isn’t comparative either.

While that probably means there isn’t 80% downside risk in today’s Nasdaq 100, it doesn’t mean you should rest on your laurels and assume there’s clear sailing either.

Adam Aloisi was long shares of CSCO, MSFT, and INTC at time of writing. Although he was not long any FANG stock, he owned FDN, an Internet Index Fund containing all four stocks. Positions can change at any time.

Disclaimer: The above should not be considered or construed as individualized or specific investment advice. Do your own research and consult a professional, if necessary, before making investment decisions.