SunEdison Inc (OTCMKTS:SUNEQ) has received new funding in order to operate in bankruptcy. The bankrupt solar firm confirmed Friday that it has secured a new deal on a loan to fund the firm during bankruptcy. “The Devil’s in the details,” says SunEdison’s top lawyer, Jay Goffman.

After several objections from creditors, SunEdison has secured a deal to receive a $1.34 billion loan. These much needed funds were part of talks for four days. The money will help the firm maintain its global operations during the bankruptcy proceedings.

Attorneys at SunEdison and for creditors agreed on the details of the loan Friday. As part of the deal, the solar firm will end its request for an independent examiner to study its pre-bankruptcy actions. Instead, the deal will see the creditors probe the claims.

Reports from independent examiners are regularly used in bankruptcy cases, especially if they’re intricate and lengthy.

All of the parties involved will return to court on Jun. 7. SunEdison will try to see the approval from U.S. Bankruptcy Judge Stuart Bernstein in a Manhattan court. The judge will give his ruling once all of the paperwork is completed and filed.

Lenders were initially concerned about how much these new funds would be used. Some thought the solar firm would repackage its existing debt. It presently has $16 billion worth of debt. The yieldcos – TerraForm Power Inc (NASDAQ:TERP) and TerraForm Global Inc (NASDAQ:GLBL) – wanted assurance that the fees it pays for management operations would be used for those.

In the past, TerraForm Power had lent SunEdison money to pay for projects in India. However, rather than using those funds for the projects, they were used to pump its balance sheet.

After some talk, the yieldcos asserted they would continue making payments to SunEdison.

By the end of it all, the new agreement would see the start of a $1 million litigation trust. These funds would be used to probe future claims made against the solar firm and its executives. Also, the creditors will have a $175,000 “challenge budget” to investigate other claims.

“The focus of the committee really was: We understand that these are going to be difficult cases. Unsecured creditors should have some opportunity for some value here if value is maximized for all constituents,” said Matthew Barr, a lawyer for the creditors.

The liquidation of SunEdison’s assets starts.

Rothschild, the solar firm’s restructuring agent, is now accepting bids for its asset portfolio. The portfolio is huge. It’s a five-gigawatt collection of operating and development assets. All of the assets will be reportedly bundled by geography.

It has been stated that SunEdison has yet to make a concrete decision on the liquidation process. However, since the firm is unable to refinance or re-emerge, the liquidation is likely to move ahead.

SunEdison currently has projects, open and in development, worldwide. Some of the projects are situated in Chile, the U.S., India, Israel, Egypt and elsewhere. The firm maintains 100 percent ownership in nearly all of the projects. 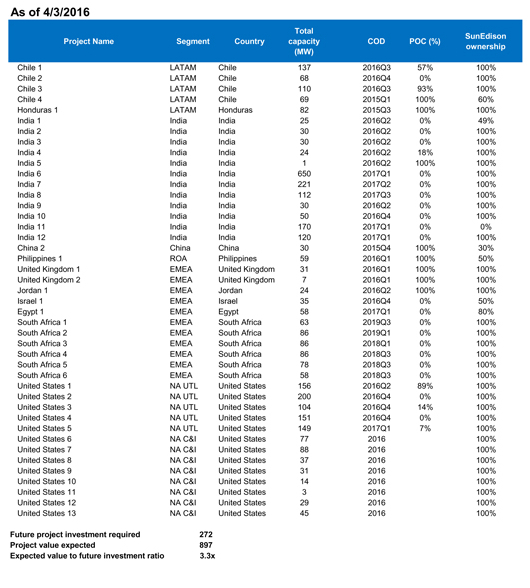 Last month, SunEdison filed for bankruptcy after taking on too much debt, expanding too quickly and facing many financial and legal woes. Its stock collapsed 99 percent in a nine-month period.