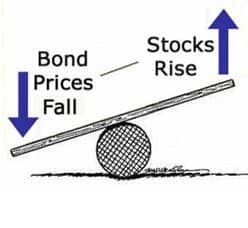 Most analysts now agree that Fed tapering is fast approaching, perhaps as soon as next month. The news has had a dramatic effect on Treasury yields, pushing them above 2.8% for the first time in over two years.

But the rise in Treasuries is having an adverse effect on the equities market, with the S&P 500 sliding 2.1% and the Dow losing almost 4% from the record close set earlier this month.

This post by Sober Look explains the correlation between rising treasury yields and earnings.

Sober Look – “If rates continue to rise, higher cost of borrowing will ultimately begin to eat into earnings – and will be immediately reflected in stock prices. At this stage the stock market in the US (and to some extent globally) is taking its lead from treasuries.”

Companies have basically been gorging on a sea of cheap debt for the past several years, and now that’s all coming to an end, with high-dividend shares being impacted the most. So be careful of abandoning bonds for the perceived nirvana of equity markets.

Stockcharts: – Bond yield resumes uptrend. – There is little doubt that bond yields have bottomed and that the thirty-year bull market in bond prices has ended. That’s bad news for bond prices that fall when yields rise.

Learn Bonds: – Don’t get ripped off by this bond market shenanigan. – Financial Lexicon exposes this sneaky little trick some brokers are using to screw their clients.

The Big Picture: – What do outsized bond yield % increases mean? – Nice chart from Andrew Lapthorne of Société Générale describing the spike over the past few months in bond yields.

Sober Look: Year-to-date performance across fixed income. – Given the ongoing volatility in fixed income markets, it’s time to once again to take a look at performance. The chart below shows where we stand on a year-to-date basis for major asset classes from a USD investor’s point of view.

FT: – Amlin chief warns against ‘herd’ investing in catastrophe bonds. – The chief executive of Amlin, the Lloyd’s of London insurer, has cautioned about the risk of a “herd mentality” among mainstream investors such as pension funds flocking to the sector.

Interactive Investor: – Six alternative investments to bonds. –  If you’re keen to avoid the further falls in bond capital values, where else could you look? We offer some alternatives to consider.

Pater Tenebrarum: – What’s behind the weakness in Treasury bonds? – Pater looks at what really caused the recent treasury bond sell-off.

CNBC: – Bond exodus accelerates as yields creep nearer 3%. – Outflows from U.S. bond mutual funds and exchange traded funds has accelerated in August, according to a new report by TrimTabs, as fears grow of the threat that rising yields pose for the U.S. economy.

FundWeb: – Low bond yields: The end of an era? – With bond yields in the UK and US rising off the back of central bank moves, investors have started to question whether the days of extraordinarily low yields are coming to a close.

Barron’s: The return of the 5% muni bond. – The recent selloff in the bond market has left municipal bonds at strikingly attractive levels. How to find yields equivalent to 8% on taxable bond.

WSJ: – Bond funds outflows shouldn’t panic investors. – Many investors are fleeing bond funds. Those who have stuck around this long might be better off staying put.

CNN Money: – Don’t be a bond Chicken Little. – Panicking about interest rates going from 1.6% in May to 2.8% doesn’t make sense because rates never should have been as low as 1.6% in the first place.

FT Alphaville: – That spike in U.S. treasury yields. – While in absolute terms the U.S. 10 year benchmark is simply back at summer 2011 levels, the pace of deterioration since the beginning of May has not been seen in recent decades. Over the past week alone, yields have leaped 30 basis points.

ETF Trends: – High-yielding ETFs make bank loan market more volatile. – The rise of bank loan ETFs driven by yield-seeking investors is having an impact on the underlying market, according to a report Monday.