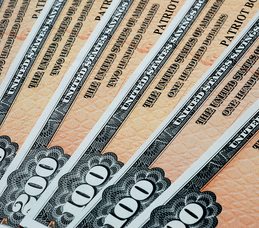 Part 2 of 3 In The Saving Bonds Series

General Motors (GM) for many years was a leading manufacturer of cars. They started to have a problem starting in the 1990’s however, which got progressively worse. While not frequently discussed, this is one of the primary reasons that the US government needed to bailout GM and Chrysler only a few years ago. The original problem was that they were manufacturing more cars then people wanted to buy.  Their solution to this problem, which I will generously describe as “kicking the can down the road,” ended up making the problem worse.

What do you do if you make more cars than people want to buy?

A short-term solution is to discount the car through big rebates. That will move cars for a while. Will a few thousand dollar rebate really change the overall demand for cars though? People are not going to buy more cars because the  price is 10% cheaper. They will instead simply change when they purchase to get the discount. What GM was really doing is creating immediate demand, and encouraging people to buy NOW instead of holding off on the purchase.

A bigger problem emerged when GM tried to stop using rebates. The first part of this problem was that they were still making more cars than people wanted to buy, so the original issue was unresolved.  The second part of the problem was that short-term demand was very weak, because many people that would have naturally been inclined to purchase a car had already done so, in order to take advantage of the rebates. In other words, the problem was worse after the rebate then before the rebate. Ironically, the only solution was to keep rebating or face horrible sales numbers.

What does This Have To Do With US Savings Bonds?

We estimate tens of thousands of senior citizens face a similar two headed problem when it comes to savings bonds.  Many senior citizens have put off redeeming their savings bonds after they reach final maturity, in order to avoid paying taxes and potentially increasing their tax bracket.  If they redeem the saving bonds after having delayed this action for a  few years however, they would now face potential tax penalties for not declaring the income when the saving bonds reached final maturity. Like GM, the solution that many seniors are embracing is to delay dealing with the fundamental problem by not redeeming their savings bonds at all.

How did this problem happen?

Interest income on US savings Bonds is taxable. Many Savings Bond holders believe that they need to pay taxes on savings bonds only when they cash them in.  This is wrong.  If you are not reporting the interest on an annual basis, you must declare the interest on the savings bond when the FIRST one of these occurs.

In other words, you don’t need to have received any money in order to have a tax liability. From a tax perspective, you are required to report the income on a Savings Bond for the year in which the bond matures, regardless of if you have cashed it in or not. If you don’t, you could face tax penalties such as being charged interest on the overdue taxes.

Takeaways: Check the maturity date of your savings bonds and redeem them when they reach final maturity.

In tomorrows final installment we will look at the 5 Best Websites for Information on US Savings Bonds.