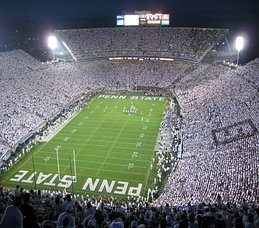 This article deals with the economics of a sensitive issue, the aftermath of the child abuse scandal involving the former Penn State assistant coach, Jerry Sandusky. A court of law found Sandusky guilty of over 30 counts of child abuse. What Sandusky did to those children is unforgivable and no amount of jail time will be ever enough punishment for his crimes. The NCAA has found Penn State University culpable for not stopping these horrible crimes sooner because, they were in possession of information that if properly used could have potentially uncovered Sandusky’s offenses.  We hope that adults in positions of power will come away with the understanding that preventing child abuse is their direct responsibility.

We believe that the Sandusky scandal and the penalty imposed by NCAA are major long-term negatives for Penn State University bondholders. This view is not completely shared by the two largest credit rating agencies, S&P and Moody’s. S&P reaffirmed their rating at AA/Stable (the third highest possible rating)  and Moody’s, while having a negative outlook, still has the rating at Aa1 (the second highest). The scandal has not seemed to impact the price of the University’s bonds.   BondView, a website which focuses on market data and analytics for munis, rates many of Penn State’s bonds as expensive compared to similar bonds. For example, the Penn State University bond maturing on 3/2035 with a 5.00% coupon rate (CUSIP number 709235UH6) trades at $113.53. Over the last six months, the price of this bond has been rising along with municipal bonds in general. Learn Bonds suggests that you take advantage of the rising demand for municipal debt to get out of Penn State University bonds.

Free Course: How to Invest in Municipal Bonds

In the Moody’s report, they include the following positive data about Penn State University:

The university appears to be thriving following the Sandusky scandal, instead of suffering. However, we think the positive stats mentioned above are short-term phenomena directly related to the scandal. The alumni and Pennsylvanians are rallying around the school in its time of “need”. However, this reaction will fade with time.  (Concerned about the muni market in general? Read our special report on municipal bond defaults, safety, and credit ratings)

Longer term, the NCAA punishment will effectively demolish Penn State University’s ability to compete at the highest level in college football. Without football to engage and excite alumni (donations) and the revenues derived from football, the school may be in for financial difficulties.