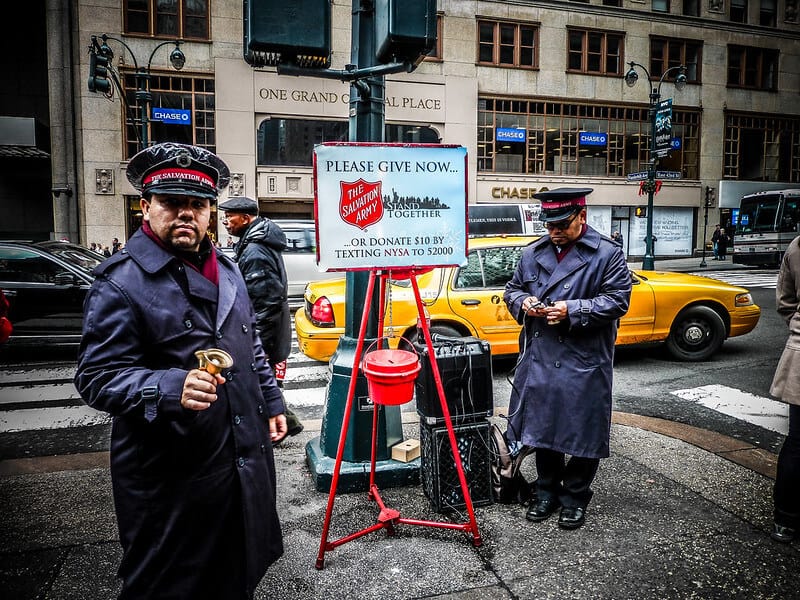 The Salvation Army will take contactless donations across the country for the first time for its iconic Red Kettle fundraising drive.

The Christian charity said its US arm will accept Apple Pay or Google Pay payments at its 25,000 pitches across the country, where volunteers will ring bells urging passers-by to fill their red kettles with donations.

Also, those with Amazon’s Alexa will be able to say “Alexa, donate to The Salvation Army,” then specify the amount.

Scott Justvig, executive director of development and communications for The Salvation Army metropolitan division, said: “The goal is to give supporters who are not carrying cash the ability to quickly donate to The Salvation Army as they’re walking by a red kettle.”

The charity’s 129th Red Kettle campaign, first launched in 1891, is the largest and longest-running fundraiser of its kind.

The drive, which begins on Thanksgiving Day and runs through Christmas Eve, provide shelter and meals for the homeless, Christmas toys for children and social service programmes for millions in need all year-round. Last year the campaign raised $142.7m.

The Salvation Army was founded in 1865 in East London, UK, by Methodists, William and Catherine Booth, who abandoned church pulpits to take their Christian message directly onto the streets.