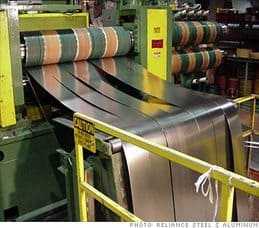 When scouring a list of recently priced new issue corporate bonds, there was one in particular that piqued my interest.  I currently own Reliance Steel & Aluminum’s November 15, 2036 maturing, 6.85% coupon notes (CUSIP 759509AB8).  So when I saw the company was issuing new 10-year notes, I wanted to take a look.

Change of control is defined in the preliminary prospectus supplement as the following:

“Change of control” means the occurrence of any of the following: (1) the direct or indirect sale, transfer, conveyance or other disposition (other than by way of merger or consolidation), in one or a series of related transactions, of all or substantially all of the properties or assets of Reliance and its subsidiaries taken as a whole to any “person” (as that term is used in Section 13(d)(3) of the Exchange Act) other than Reliance or one of its subsidiaries; (2) the adoption of a plan relating to Reliance’s liquidation or dissolution; or (3) the consummation of any transaction (including, without limitation, any merger or consolidation) the result of which is that any “person” (as defined above) becomes the beneficial owner, directly or indirectly, of more than 50% of the then outstanding number of shares of voting stock of Reliance.

A ratings event is defined in the preliminary prospectus supplement as the following:

The rating agencies referred to above are Moody’s and S&P.

Finally, the notes have a “Special Mandatory Redemption” clause regarding the merger with Metals USA Holdings.  It calls for a redemption at a price of 101 should the merger not occur by 5 p.m. Eastern time on December 15, 2013 or should the Merger Agreement be terminated prior to that date.  This clause is now of no significance given that Reliance Steel & Aluminum has completed the acquisition.

At the time this article was written, CUSIP 759509AE2 was being offered for 101.181, a yield-to-par call of 4.35%.  When I purchased the 2036 maturing Reliance Steel & Aluminum notes, I only picked up half a position size.  Now I will be adding the new 2023 notes to my individual bond watch list to hopefully, at some point in the future, pick up the second half of a full position in the company.