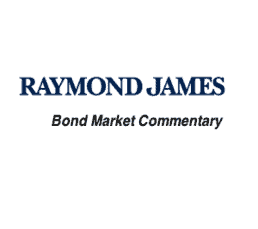 Around the world it appears that investors are still somewhat reluctant to pursue risk, instead choosing to favor the “risk off” trade that typically results in lower Treasury yields and tighter corporate bond spreads. Friday’s closing yield of 1.601% on the benchmark 10-year Treasury note was only 2bp away from the lowest level since back before Thanksgiving, just when the whole “fiscal cliff” debacle really started getting coverage in the news. Shortly after Thanksgiving the bond market was met with higher-than-anticipated demand for newly issued Treasury securities at auction, adding further fuel to the market consensus. With the general risk-aversion trade marching at full pace last month, short-term Treasury volatility, as measured by the Bank of American Merrill Lynch MOVE Index, was the lowest level on record since 1988 when the index began tracking such data. The chart below shows the typical ebb and flow for the index over a long period of time that generally corresponds to the market’s overall feeling towards risk; the index generally hits a trough as equity markets hit their peak and rises when equity markets begin a correction. For the sake of comparison, this index spiked as high as 265bp back in October 2008 as the financial crisis hit its peak. In the face of the so-called “fiscal cliff” enveloping Washington the conclusion from this index is simple: low Treasury volatility often means that the recent equity rally could be in for a pause. The limited volatility in the shorter-term Treasury market also translated to their longer-term brethren as the 10-year note saw one of its tightest trading windows. Confined to a range of only 22bp for all of November, this marked the narrowest trading range on record going back to April of 2007. 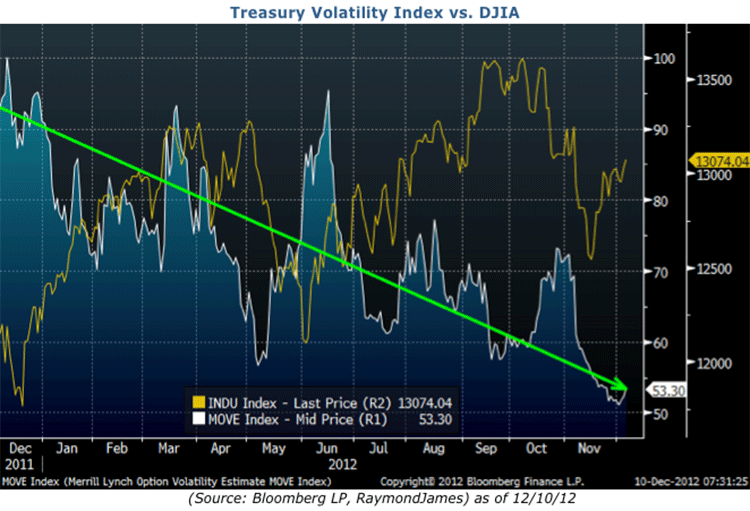 Looking further ahead, this week we will be treated to a wide-variety of economic data and statistics: the October trade balance arrives on Tuesday, import prices on Wednesday, retail sales, producer prices and jobless claims all on Thursday with consumer prices rounding out the week on Friday.  Wednesday will be yet another Federal Open Market Committee (FOMC) rate decision with expectations once again for no change from the current target rate of 0.25%. As with previous releases and the “press conference” held by Chairman Bernanke, market participants will once again scrutinize the language used by the committee as it attempts to discern the future of monetary policy going into the new year. As a reminder, this will be the first FOMC release post-Presidential election and it will be interesting to see whether or not the group initiates a new policy of targeting key metrics such as unemployment, CPI or inflation directly as opposed to its current strategy of targeting dollar-based quantities of repurchases. Several FOMC committee members have hinted at this possibility and many in the markets speculate that this is where the Federal Reserve is heading in the near-future.

The author of this material is a Trader in the Fixed Income Department of Raymond James & Associates (RJA), and is not an Analyst. Any opinions expressed may differ from opinions expressed by other departments of RJA, including our Equity Research Department, and are subject to change without notice. The data and information contained herein was obtained from sources considered to be reliable, but RJA does not guarantee its accuracy and/or completeness. Neither the information nor any opinions expressed constitute a solicitation for the purchase or sale of any security referred to herein. This material may include analysis of sectors, securities and/or derivatives that RJA may have positions, long or short, held proprietarily. RJA or its affiliates may execute transactions which may not be consistent with the report’s conclusions. RJA may also have performed investment banking services for the issuers of such securities. Investors should discuss the risks inherent in bonds with their Raymond James Financial Advisor. Risks include, but are not limited to, changes in interest rates, liquidity, credit quality, volatility, and duration. Past performance is no assurance of future results.