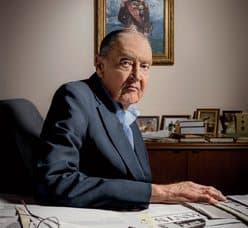 Facing outflows amid the much publicised departure of longtime CEO Bill Gross and an increasing trend toward passive fund management. Pimco has come out fighting, saying some fixed income managers can meaningfully add to returns.

Pimco pensions strategist James Moore defended active bond management, in a piece posted on the firms website. In which he refutes comments made by the legendary advocate of index-based investing, Jack Bogle.

Moore was referring to a recent television appearance by Bogle in which he said the arguments for index investing hold just as much for bonds as stocks.

“The key question for investors is, ‘Do I have a strong reason to believe my active managers will add value in excess of their fees’,” asked Mr. Moore. “I would not argue that all do or even that a majority do, but those manager who understand and exploit the five reasons I list, plus a host of others, stand a good chance.”

Moore offered a series of reasons why “the common wisdom” about the superiority of so-called passive investing might not extend to bonds. Here are five important ones:

1. A significant fraction of investors in fixed income markets have primary objectives that differ from maximizing mark-to-market total returns.

2. Unlike equity indexes, where the market determines the weights, in bond indexes issuers principally determine the weights.

3. The new issuance market is much more important for bonds than equities.

4. Most bond trading is done via over-the-counter transactions and not on exchanges.

5. Individual bond returns are highly skewed versus stock returns, which are more symmetric.

Learn Bonds: – Bond theory from the Bond Squad. – Our focus this year has been on economic data, fiscal and monetary policy and financial market conditions. However, we have received many questions from readers regarding the callability and price sensitivity of fixed income securities. As such, the focus of this week’s “In the Trenches” report is bond theory.

Income Investing: – ‘Overbought’ Muni Bonds Warrant Caution – MMA. – Municipal bonds have been dutifully tagging along with Treasuries as the latter have rallied in recent weeks, with high-grade muni bonds gaining 0.6% last week and 1.45% so far this month, per Bank of America data. That’s left the muni market looking a bit rich to some people, including Matt Fabian of Municipal Market Advisors.

MarketWatch: – Robots haven’t taken over the bond market yet. –  Trading in the bond market may be starting to catch up to the times, but we’re far from a world where all bond prices are quoted by R2-D2.

Bloomberg View: – A little volatility can be good for you. – Gyrations in financial markets are giving rise to a plaintive cry from investors: Prices are getting more volatile because new regulations are making big banks less willing to buy when others want to sell.

Trustnet: – Beware “extremely expensive” bond market, warns Brookes. – The recent rally in government bonds following the sell-off in equities has left US treasuries and gilts “extremely expensive”, according to fund experts, who warn that investors are making a big mistake if they were to dip into sovereign debt at this level.

The Guru Investor: – Top bond manager sees rates going lower … and lower. – Hoisington Investment Management has been successfully betting on Treasury bonds since the late 1990s, helping put its Wasatch-Hoisington US Treasury fund in the top 1% of funds in its class over the past decade as interest rates have tumbled, according to Morningstar. And it doesn’t see interest rates rising anytime soon.

FT: – Corporate bond sales recover as turmoil wanes. – Global corporate borrowers are returning to the US debt capital markets after sales of new bonds collapsed last week in the aftermath of a sharp sell-off in equities and a spike in volatility.

Donald van Deventer: – 3 reasons why Kinder Morgan Energy Partners is the best value long bond trade. – We rank the issues of 20 years or more in maturity by the ratio of credit spread to default probability. Kinder Morgan Energy Partners tops the rankings due to three things that are dependent on low credit risk: ability to issue long maturities, high trade volume, and best spread-PD ratio.

Bloomberg: – Pimco sticks to bullish Brazil call after buying up bonds. – Brazilian economic policy is set to improve regardless of who wins the country’s presidential election this weekend, supporting asset prices, according to Pacific Investment Management Co., which manages the world’s biggest bond fund.

ETF Trends: – One country EM bond ETF investors need to watch. – There is not a Venezuela-specific ETF on the market today, which in the eyes of some short sellers is probably too bad given the recent plunges by ETFs that track other Organization of Petroleum Exporters (OPEC) member states. Venezuela does, however, figure prominently in some emerging markets bond ETFs.

Reuters: – Extreme mortality bond testing investor view on pandemic risk. – An extreme mortality bond, which pays investors if a pandemic, a major terrorist attack or even a war causes more deaths than statisticians expect, is being quietly marketed to global institutional investors.

ETF Trends: – Solving the Fed riddle with new bond ETF ideas. – Treasury ETFs have soundly outpaced popular asset classes such as equity-based ETFs and junk bond funds, but with the end of the Federal Reserve’s monetary easing regime, the time is now for investors to start evaluating ETFs for the next rate cycle. Street Global Advisors Research Strategist Matthew Bartolini, CFA and Portfolio Strategist Andrew Goodale discuss specific ETFs that advisors and investors can use in preparation of what could be a “new look” Federal Reserve in 2015.

Financial Planning: – Should you be building bond ladders? – Bond ladders work well when rates are rising, giving wealthy investors sequential opportunities to exchange maturing low-rate debt instruments for higher-yielding paper. Rates are low now, but they will go up eventually — perhaps even next year, if the U.S. central bank starts nudging short-term rates higher, as many Fed watchers expect.

Wall Street Daily: – Four severely flawed portfolios. – If you can predict the future with certainty, then stop reading. This article isn’t for you. But if you’re simply human, like the rest of us, you shouldn’t construct your portfolio as if you’re Nostradamus.

ETF Database: – How to build an income portfolio with ETFs: Insights from David Fabian. –  Investors who rely on the current income stream from their portfolios have likely been thinking of prudent ways to more favorably re-position their holdings over the coming months. We recently had an opportunity to talk with David Fabian, a managing partner at FMD Capital Management, whose firm specializes in actively managed ETF portfolios. David offers his insights below on how investors can utilize ETFs to build an income portfolio.

Investopedia: – Will ETFs eventually replace mutual funds? – Mutual funds have been the mainstay for retail investors for decades. But will they stay that way? There are lots of options now such as exchange-traded funds (ETFs) and even hedge funds for the exceptionally wealthy.

Riabiz: – Schwab phones some Private Client customers to advise dumping PIMCO Total Return fund. – Charles Schwab & Co. is advising Schwab Private Client customers to move their assets out of the PIMCO Total Return fund. The San Francisco-based RIA, which manages $58 billion in 142,000 accounts, has reached out to customers by telephone with the suggestion to yank all assets in the fund formerly managed by Bill Gross and move them to lower-expense ratio funds and stable management teams.

NJ bonds are in the “Tunnel of Love” phase as only true fans know the genius of the opportunity now…”Better Days” coming..

First Fed rate hike not fully priced in until Nov-Dec 15 and VERY slow trajectory from there with target rate 2.50-2.75% over next 5 years