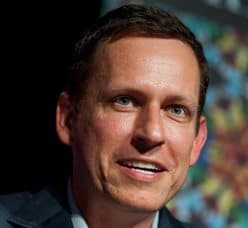 Peter Thiel the billionaire co-founder of PayPal Inc said today that he’s trying to stay away from a “really crazy government bond bubble” brought on by record-low interest rates in the U.S., Europe and Japan.

In response to a question at the Dublin Web Summit about whether technology startups’ valuations are overinflated. Thiel said his “candidate for the bubble today would be these super-low interest rates, the negative real interest rates.”

Despite those warnings, investors worldwide have made about $1 trillion buying and selling U.S. treasuries since the Fed dropped interest rates to almost zero and began three rounds of debt purchases in late 2008. European Central Bank President Mario Draghi said today he’ll be ready to boost stimulus to the economy if needed.

Learn Bonds: – Most analysts missed on 2014 rate forecasts – What about 2015? – Some analysts are wondering whether or not the economy can really continue to grow…even at its current tepid pace…after this long of a time period. History certainly doesn’t support the possibility.

Reuters: – Muni investors worried about tax impact from U.S. midterms. – Sweeping changes in the Senate have rekindled old worries for U.S. municipal bond investors about a clean-up of the tax code that could impact bonds, however, fundamental changes to the tax treatment of munis is seen unlikely.

Reuters: – Trading of U.S. municipal bonds plummets in 3rd qtr. – Trading of U.S. municipal bonds seized up in the third quarter, with the number of trades down 25.4 percent from a year earlier and the total par amount falling 18.6 percent from the third quarter of 2013, according to data released by the Municipal Securities Rulemaking Board on Wednesday.

MarketWatch: – The SEC punishes Wall Street–for the wrong reasons. – This week the SEC and the MSRB stepped in to slap down 13 Wall Street banks and brokerages with hundreds of thousands of dollars in fines for the serious crime of…letting you buy an investment that might not be good for you.

Financial Planning: – Next year could be bumpy for debt markets, says Schwab strategist. – Kathy Jones, a Schwab vice president and fixed-income strategist at the firm’s Center for Financial Research, says she’s heard both market optimists and pessimists advocate a move to riskier assets next year, Jones suggests a different strategy. In her view, the year is likely to bring slow to moderate economic growth, low inflation, a moderate rise in rates and a flatter yield curve.

The Economist: – Every man for himself. – Economic policies are diverging in the developed world as deflation looms.

WSJ: – Walgreen prepares large bond sale for Alliance Boots deal. – (Subscription) Walgreen Co. is expected to begin selling as much as $10 billion in bonds in dollars, euros and British pounds as early as this week, in a sale that would rank among the largest corporate bond deals this year.

WSJ: – Lennar said to withdraw $350 million junk-bond sale. – (Subscription) Lennar Corp. has withdrawn a proposed $350 million sale of five-year, speculative-grade bonds, according to a person with knowledge of the transaction, who asked not to be identified, citing lack of authorization to speak publicly.

FT: – Junk bond rebound follows end of QE. – (Subscription) As the Federal Reserve wraps up its latest round of quantitative easing, one unlikely asset class is benefiting from the end of easy money: Junk bonds.

Bloomberg: – Junk sales roar back as bond gyrations subside. – The riskiest corporate borrowers in the U.S. are returning to the bond market after being shut out amid the biggest price swings in a year.

The Economist: – Invisible bonds. – Foreign borrowing by emerging-market firms is higher than it seems. Since the financial crisis, big Western banks, short of capital and weighed down by regulation, have become much less enthusiastic about lending to companies in emerging markets.

Bloomberg: – Vanguard gets record $163.4 billion in 2014 investor cash. – Vanguard Group Inc., the largest U.S. mutual-fund firm, attracted more money from investors in the first 10 months of 2014 than it has in any full calendar year in its 39-year history.

Trustnet: – The funds that should come with a health warning. – Investors in strategic bond funds which are yielding above 6 per cent should be asking their managers some serious questions, according to Baillie Gifford’s Torcail Stewart, who warns that the recent search for yield means certain funds are taking very large risks.

Moody’s: “A record-breaking 47% of high-yield issuances featured a HY-lite structure in September 2014”