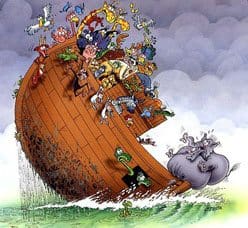 A full sized replica of Noah’s Ark could sink without a trace unless investors purchase roughly $29 million in unrated municipal bonds by Feb. 6. Writes Bloombergs Brian Chappatta. Giving bond buyers just 34 days and 33 nights to save the stricken project.

The project has so far raised $26.5 million, but needs to sell another $55 million in total to avoid triggering a redemption of all the bonds, Ken Ham, the nonprofit’s president, said in an e-mail to supporters yesterday. Without the proceeds, construction funding will fall short, he said.

The 510-foot  “Ark” is intended to be the centerpiece of a planned biblical theme park called Ark Encounter. But the deal has come in for criticism, with some saying its religious theme may violate the Constitution.

Religious objections aside, the deal highlights the risk of Industrial-development bonds, which are considered the riskiest municipal debt because they account for the largest proportion of defaults in the $3.7 trillion municipal market.

The first phase of construction is due to start in March, but time is fast running out and the signs aren’t good. Ark Encounter has so far failed to entice any institutional investors, a sure sign of the validity of the project.

Unless the hole in funds can be filled by private bond buyers before the February 6th deadline, the whole project will have to be abandoned. It seems only a miracle can save them now. Still, stranger things have happened!

Forbes: – How could a Puerto Rico default hammer the $3.7 trillion U.S. muni-bond market in 2014? – As we head into 2014, you may be asking why we are concerned about a small island located in the Caribbean Sea, about a thousand miles southeast of Miami. Geographically, it is a mere speck on the map… practically irrelevant. In fact, 70 islands the size of Puerto Rico could fit comfortably into the state of Texas. However, the debt burden currently burying this economy may eventually send nasty tremors into the United States’ municipal bond market.

Morningstar: – Year in review: Municipal CEFs. – Normally regarded as a sleepy–and “safe”–asset class, municipal bonds were hammered in 2013. In fact, munis were hit twofold: first by rising interest rates, and then by credit concerns. After a spectacular run in 2012, many muni investors were likely disappointed.

FT: – BlackRock steps into Detroit bonds fight. – BlackRock, the world’s biggest fund manager by assets, is preparing to step in to the fight over the financial future of Detroit, where the treatment of bondholders could set a precedent for struggling towns and cities across the U.S.

ETF Trends: – A battered municipal bond market enters 2014. – Since the S&P Municipal Bond Index was launched in 2000 it never has had two years in a row of negative returns.  However, a new year begins with all the uncertainty and expectations of any other year.  Municipal bond funds are entering 2014 following a long string of monthly cash outflows indicating that retail investors remain skeptical of the short term prospects of the muni market.

MoneyNews: – Consider emerging market, muni bonds. – With U.S. stocks having soared last year while bonds declined, many investors will want to rebalance their portfolios to maintain their desired stock and bond allocations.

Bloomberg: – Treasury yields drop from 2-year high as investors weigh outlook. – Treasury 10-year yields fell from the highest level in more than two years as investors speculated whether the U.S. economy will improve enough for the Federal Reserve to end bond purchases in 2014.

Jay on the Markets: – Bonds are to fear early in the year. – The treasury bond market has showed a strong seasonal tendency to perform poorly during the early part of the year.  People often ask me “why” this would be so.  In fact I get that question often enough to make me wish I had a good answer.  Alas, as a proud graduate of “The School of Whatever Works”, I can only repeat our school motto, which is “Whatever!”

Bloomberg: – Credit swaps hold in U.S. as bond spreads reach lowest since ’07. – A gauge of U.S. corporate credit risk held at about the lowest level in six years as relative yields on investment-grade debt fell to the least since 2007.

Fundweb: – Corporate bonds move into 2014 with an uncertain future. – Quantitative easing has made corporate bonds a boon for investors but its slowdown in 2014 will bring increased volatility and greater chance of defaults.

Forbes: – High yield bond funds see cash outflow in first reading of 2014. – Retail cash outflows from high-yield funds totaled $643 million for the week ended Jan. 1, according to Lipper, a division of Thomson Reuters . The negative start to the new year saw a fairly even split, with outflows from mutual funds at 45% of the sum, and exchange-traded funds at 55%.

Brad Zigler: – Emerging market debt’s wild ride. – It’s fair to ask why emerging markets would have been hit so hard by a prospective end to the Federal Reserve’s bond buying program. The answer is fairly simple. Much of the money that the Fed program pushed into the U.S. economy ended up looking for yield overseas. American investors became the world’s biggest investors in foreign debt as this hot money flooded into high yield markets such as Turkey, Brazil, Mexico and Indonesia.

Bloomberg: – Gross’s mistake on Fed taper echoes across Pimco funds. – Bill Gross, the money manager known as “The Bond King,” misjudged the timing and impact of the Federal Reserve’s plan to scale back its asset purchases in 2013, spurring the Pimco Total Return Fund (PTTRX) biggest decline in almost two decades.

NewsObserver: – Bond market’s changes are going unnoticed. – While the remarkable gains of the stock market in 2013 garnered deserved attention at the end of the year, something else was happening in the much larger bond market.

IndexUniverse: – 7 most popular short-term bond ETFs in 2013. – U.S. fixed-income ETFs attracted a modest $9.58 billion in fresh net assets in 2013—or roughly a fifth of the inflows the asset class saw a year earlier in 2012—but that’s not to say that demand for fixed-income exposure was muted across the board.

Kiplinger: – The five best load funds for 2014. – There used to be a simple distinction between mutual funds based on the way they were marketed. No-load funds, which don’t charge commissions, were marketed to do-it-yourself investors. Brokers and advisers, by contrast, sold load funds, which charged commissions. The proceeds from those fees were used to compensate the intermediary.

With auctions and employment week coming up, USTs have a hard time rallying. #StuckInMud..