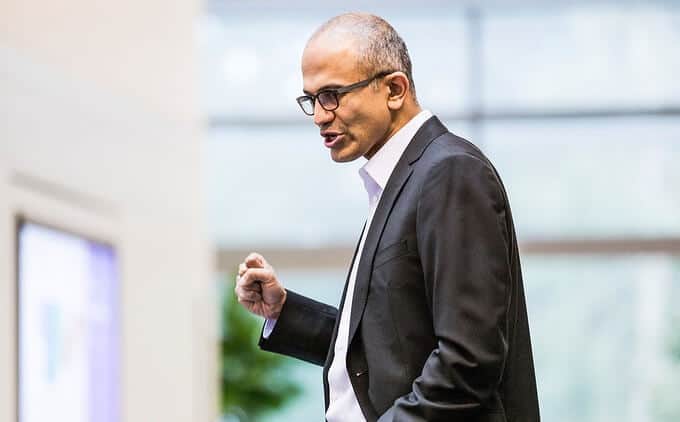 Shares in Microsoft have lifted since it was revealed that the software giant is in talks to buy China’s TikTok in a potential mega-deal that will come under intense scrutiny from the White House.

Microsoft said it is “committed to acquiring TikTok” in a statement on Sunday, following talks between US President Donald Trump and the firm’s chief executive Satya Nadella (pictured) over the weekend.

The Redmond-based giant said it hoped to complete discussions with the owners of TikTok “no later” than 15 September, in a deal that would see it own the viral social media phenomenon in the US, Canada, Australia and New Zealand.

News broke on Friday that Microsoft was in talks with China’s ByteDance, which owns TikTok, over a sale in key markets. The US firm’s stock has risen almost 3% since the close of the market on Thursday to $209.19 on pre-market trading on Monday.

Microsoft’s stock relative strength index (RSI) score is 53.62 over a 14-day average, which suggests the company is trading in technically neutral territory.  RSI scores range from 0 to 100, where the stock is considered overbought when the index is above 70 and oversold when below 30.

The software firm’s talks come as President said on Friday that he intended to ban the app on national security grounds, fearing data on US consumers may end up in the hands of the Chinese Communist Party.

The app, which shares viral videos and dance clips, is used regularly by more than 800 million people, including some 100 million users in the US.

Microsoft said any deal would ensure that “all private data of TikTok’s American users is transferred to and remains in the United States”.

Acquiring TikTok would offer Microsoft a rare opportunity to become a major competitor to social media giants such as Twitter, Snap, Reddit and Facebook, which alone has over three billion regular users.

Microsoft if it completes the sale “it may invite other American investors to participate on a minority basis in this purchase”.

Investors from Sequoia Capital, SoftBank and General Atlantic are understood to have held talks with TikTok’s owner over a sale in certain territories. ByteDance would keep control of the app in China and other markets around the world.

Can Microsoft push the deal through?

However, it is unclear whether Microsoft can pull off a deal that would satisfy Trump that the Chinese state could not access data from US consumers.

He added: “[It] could be [users’] facial recognition pattern, it could be information about their residence, their phone numbers, their friends, who they’re connected to. Those are the issues that President Trump’s made clear we’re going to take care of. President Trump has said, ‘enough’”.

Zhang Yiming, founder of ByteDance, confirmed it was in “preliminary discussions” with a tech company over a sale, in an internal letter to staff on Monday, adding that the “end solution” was unclear.