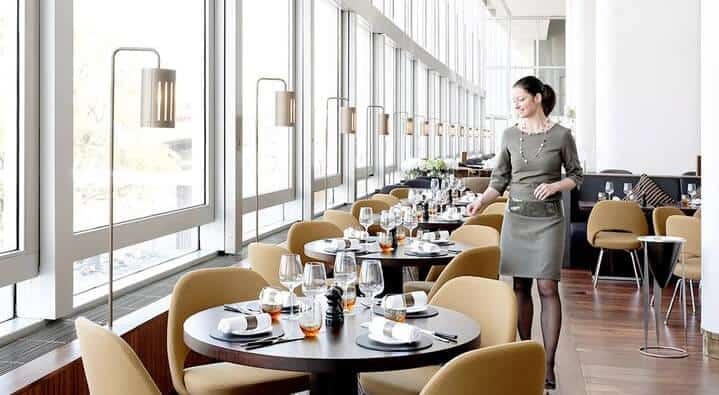 Bluebird and Pont de la Tour are among the London restaurants that announced plans to reopen on 4 July after coronanvirus lockdown restrictions are lifted.

After pubs and brick-and-mortar retailers started reopening venues, London restaurants are next in line to finalize plans to reopen.

D&D London, which owns some of the most famous London restaurants, including Bluebird, Skylon (pictured) and Le Pont de la Tour, said it is preparing to reopen 17 UK sites that day. Announcements from other London restaurateurs are expected after a three-month shutdown are expected to follow.

Some London restaurants are facing an uncertain future due to the government=mandated social distancing requirements for two meters (6 feet, 6 inches). Smaller venues and family-owned restaurants are likely to struggle with these guidelines that will put more strain on their already dwindled profits.

Life is also tough for mid-range casual nationwide dining chains such as The Restaurant Group, owner of Frankie and Benny’s and Wagamama, which last week said it expects to cut up to 3,000 workers after confirming plans to shut 125 sites. Shares in the group have tumbled 58% this year.

As the lockdown easing begins, many London restaurants are looking forward to reopening their venues.

“We are going to open up gradually,” said Des Gunewardena, chairman and chief executive officer of D&D London, which owns 43 restaurants. The first includes those with terraces or with the space to accommodate social distancing.  Staff will be required to wear masks and protective gloves while opening hours will be extended to allow employees to avoid traveling in the rush hour.

The Westminster council of London is already moving forward with plans to transform part of the city center into a continental-style outdoor dining area in an attempt to keep bars and restaurants in business.

It has lined up 50 projects to make space for al-fresco dining including pavement widening and temporary road closures for part of the day in popular districts such as Chinatown, Covent Garden, Soho and Mayfair. Some small streets near Oxford Circus may also be closed for part of the day to accommodate tables for selected London restaurants.

The hospitality sector is vital to London’s economy and plans such as the ones made by the Westminster council will help struggling restaurants under the new rules designed to prevent the spread of coronavirus.