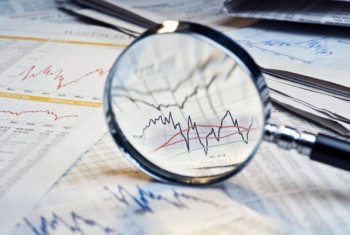 Over the past year, a lot of attention has been paid to the decline in longer-term bonds.  Today, I would like to look at what has happened to the term structure of interest rates during this period of decline.

Looking at just the yield on the 10-year United States Treasury note we see that in the middle of December in 2013, the yield was about 2.85 percent.

Note that I am using the actual yields on the notes, which are calculated on a stream of cash flows, and not the yield from “stripped” securities that are “bullet” investments that pay no interest payments but sell at a discount to the cash that will be paid the investor at the time the issue matures.  The yields on the “strip” securities provide a more “correct” estimate of the yield curve, but the current difference between the two measurements are so minor that I have just gone ahead and reported the yields from the regular securities.

Six months ago, in the middle of June 2014, the yield had dropped to 2.60 percent and only three months ago, this maturity was trading to yield about 2.55 percent.  A month ago, the yield was 2.35 percent, whereas one week ago it was at 2.15 percent.

Consequently, there has been a substantial decline in the term structure of interest rates.

Thus, the term structure of interest rates flattened out by about 100 basis points over the past year.

What seems to be going on here?

Well, longer-term inflationary expectations dropped by 56 basis points over the year, from an expected compound rate of inflation of 2.22 percent to an expectation of 1.66 percent.

The other 34 basis points decline seems to be the net result of a decline in the expectation of future real economic growth in the United States and the rise in short-term interest rates in expectation that the Federal Reserve will oversee a rise in these interest rates in the future…although they will not start to rise for a “considerable time” as stated in the Fed’s report, released on Wednesday, from the latest meeting of the Open Market Committee.

What does this decline in the term structure of interest rates mean?

According to the “expectations hypotheses” the term structure of interest rates, in its purest form, is based entirely on investors’ expectations about future interest rates.  That is, expected futures rates are unbiased estimates of forthcoming spot rates.

A modification of this, which would be applicable at this time, is the existence of a liquidity premium, where investors prefer to invest in short-term maturities and require a premium to invest in longer-term issues.

Given, at this time, that investors generally believe that interest rates will be moving up in the future, the term structure should have a positive slope…longer-term rates should be higher than shorter-term rates.  In addition, given all the liquidity the Federal Reserve has pumped into the banking system and the uncertainty that exists about the future performance of the economy, it is likely that there is a higher liquidity premium existing in the market right now than might in more normal times.

Second, however, is that the liquidity premium has declined meaning that investors did not require as large a premium to invest in longer-term notes as had been required one year ago.  This decline was probably helped by the fall in the fear that the prices of bonds/notes would not decline as much in the future as interest rates rose as had formerly been expected.  This contributed to the rise in yields in the short-term end of the market.

I have gone through this analysis to present another view on how the events in the bond market might be interpreted. We, obviously, are dealing with a very uncertain situation in a very uncertain world.  We need to look at market conditions in as many ways as possible in order to determine whether or not our interpretation of the market is as sound as it can be…given the information we have on hand.

Right now, the interpretations of the bond market, the money market, Federal Reserve actions, and the state of the economy, seem to be on the same track.  It is not the most optimistic view of the future, but the different stories seem to hold together.  Economic growth is going to be only modest at best.  Inflation is going to be well below the target rate that officials at the Federal Reserve seem to be comfortable with.  Given these projections, one can expect interest rates to rise in the future, but not nearly by as much as was expected, say, six months ago.  This is the world we are investing into.

Just one further comment:  at the end of the meeting of the Federal Reserve’s Open Market Committee, the Fed released the current forecasts of the official members of the Committee.  The results are as follows: the projections for economic growth range from 2.4 percent annually to 2.7 percent annually…slightly higher than in September…and the projections for inflation range from 1.3 percent in the near future to 1.9 percent in 2017…lower than expected in September.

The Federal Reserve numbers, I would argue, are not too different from what I perceive to be the information being generated by the bond markets.