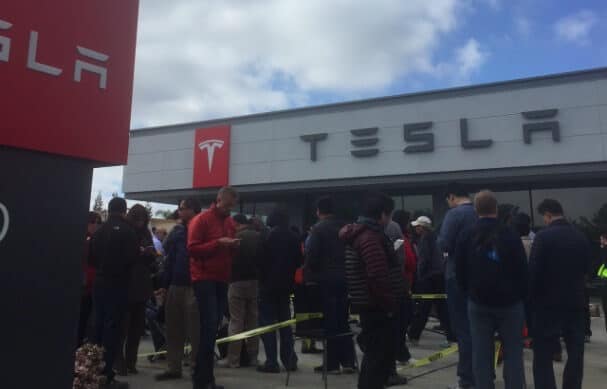 My wife and I just got back from our local Tesla Store where we placed a $1000 reservation deposit on a Tesla Model 3 that we’ve never seen and we won’t be able to drive for at least 18 months and likely much longer than that. We weren’t alone.  A lot of people were doing the same today and like us, they don’t know exactly what they’re getting into.

At the Tesla Store we went to in Mission Viejo, California there were around 300 people waiting in line when we got there. We were told by mall security that around 200 people had already gone through the line and completed their reservations. We have a family member that was placing his reservation at the Burbank, California store and he said there were at least 500 people lined up when it opened at 10:00am.  Another family member was at the Sunnyvale, California store in the Silicon Valley to make her reservation and she said there were at least 700 people there.  That’s just 3 stores and those numbers are from early in the day. So like I said, a lot of people were brave today.

Why are thousands of people paying $1000 to reserve a Tesla Model 3 today?

In our case, we already own a Tesla Model S.  We’ve been driving it for just under a year and we love the car. So although we don’t know what we’ll get with the Model 3, we assume it will be something that will feel like it belongs in the family along with our Model S.  That would be a great thing because our experience with the Model S and with Tesla as a company has been stellar.  At least we have that to go on.

For others there are many of reasons ranging from the a love for Tesla cars but budgets that don’t allow them to buy one, to environmental consciousness to just being swept up in the frenzy. Whatever their reason, people are very excited to loan Tesla $1000 while they wait a year or two for the car.

So we took our place at the end of the line – and it was a very long line. Fortunately, we were surrounded by some fun, chatty people and that helped time move quickly.  One was a Southern California Edison employee who was excited about the energy conservation aspects of EV ownership.  And as an employee of the utility company he saves even more on vehicle charging because he gets a 20% discount on his electric bill.  Pretty sweet!  We also chatted with a lady who already owns an all electric Mercedes Benz but with a range of only 85 miles she felt moving to a 200+ mile Model 3 would be a nice upgrade.

Cookies, coffee and water were served to all of us by mall management which was also nice.

We got a surprise visit from Tesla Head of Global Sales, Jon McNeill

Jon McNeill, Head of Global Sales and Service for Tesla Motors Inc walked into the store and told us he had heard about the long line and came to Mission Viejo mall to thank all of us who had waited in line to make a reservation for a Tesla Model 3.

Here’s what Jon McNeill had to say to us while standing on a chair (we recorded it):

”You are going to see it tonight we are revealing it at 8:30 online tonight on live stream. The team that’s producing the live stream is the same team that produces the grammys and American idol. You are going to get a really cool look at the car. I am going to tell you it is mind blowing! So that your wait in line is going to be totally worth it. And I got in line with you this morning on reservations too so I got my 2 reservations in right along side you guys. I just wanted to say thanks, thanks for hanging out—and hopefully we have made you a little bit comfortable, but now we are doing about 12 reservations every like 2 minutes so it shouldn’t  be much longer. So enjoy your model 3 when it comes out. Thank you.”  (people applaud)

Here’s where things got a little “funny”. When we got to the front of the line we were greeted by Tesla Store Staff.  There were a couple tables set up with iPads and they each had short lines of people waiting.  We were ushered to a small meeting area where we could sit down.  We did that but as soon as we did we were told we had 2 minutes to fill out a form (on a Mac) and a timer started.  We felt a little pressured but that’s ok, we understood that they needed to push a lot of people through the reservation process.  We finished with time to spare! 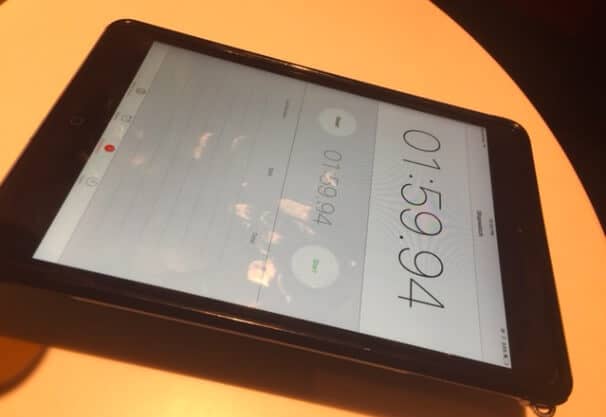 No one asked us if we knew what we were doing. Nothing like “Hey, thanks for coming in today to reserve your Tesla Model 3. You know that’s what you’re doing, right?”. No deposit agreement. No confirmation number.  We haven’t received a confirmation email yet.  We did check with the credit card company and the charge was made. So that part was a little bit weird. We walked out saying “are we lemmings or what?”.

Even so, we were super excited knowing that we probably got our reservation and we had fun doing it.

Tonight, we’ll watch the Model 3 reveal online and hopefully we’ll get a little better idea about what we’re going to be getting in a year or so.  Wish we could be there in person – tried and failed to get tickets to that.

Right now, we’re both feeling a little tired.  We hope Elon will break tradition tonight and start the event on time.