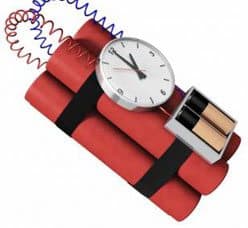 24/7 Wall St has an interesting article today, looking at the way hedge funds have amassed as much as 23% of the outstanding dollar-denominated high-yield bond market since the credit crisis, raising concerns that bets with borrowed cash will accelerate losses if and when the Federal Reserve stops printing record amounts of money.

“The problem is that there could be a junk-bond debacle that could truly threaten the financial system if all the selling starts around the same time [as the Fed tapers]. What happens when mass selling starts is that the bids on the bonds start to drop. The funds then mark their holdings to the market as the bids drop, and then come the margin calls. If they have used other junk-bond debt as collateral for their margin, the whole unraveling starts to feed on itself.”

So how can retail investors, who have moved substantial amounts of capital into junk bonds in desperate search of yield, protect themselves from the potential fallout?

“If you own quality funds, ones run by quality managers, you likely will be reasonably safe in the event of a sell-off. If you own junk bonds via a mutual fund or an exchange traded fund, look to reinvest your monthly or quarterly dividends. This acts as a dollar-cost averaging mechanism that helps you buy fewer shares if the price is high and more if the price drops.”

“Hedge funds use a host of very sophisticated strategies to generate top returns for their investors. While using large amounts of leverage and margin is hardly the most sophisticated strategy in the hedge fund arsenal, it is one of the most widely used. It also the one that tends to exacerbate sell-offs massively. It stands to reason that hedge fund managers see the end of the Federal Reserve’s low interest rate landscape. It also stands to reason they will sell in front of the interest rate increases, not the moment the first one goes into effect.”

Learn Bonds: – How will the affordable care act impact municipal bonds? – With October 1, 2013 marking the start of enrollment for government run health-exchanges, it is worth taking a look at potential municipal market impacts.

DealBook: – Worsening debt crisis threatens Puerto Rico. – While Detroit has preoccupied Americans with its record-breaking municipal bankruptcy, another public finance crisis on a potentially greater scale has been developing off most Americans’ radar screens, in Puerto Rico.

Municipal Finance Today: – Retiree benefit ruling may impact local govt’s ability to manage finances. – The recent decision on retiree healthcare benefits by a U.S. judge in a California case may have a significant impact on the way local governments manage their finances, according to two ratings agencies.

CFA Institute: – The cheapest bonds in the United States. – DoubleLine’s flagship total return fund has beaten 97% of peers over a three-year horizon, with a 6.8% annual return as of 30 September. Whereas some fixed-income managers feel this is just the start of the rate selloff, Gundlach appears to have a very contrarian view that rates have risen too far, and he has been aggressively buying longer-duration bonds. Because not all bonds and duration are created equally, DoubleLine, as MBS experts, has found an unique sector of the MBS market in which to express these views.

Bloomberg: – Gross buying bonds tops Boehner’s default warning. – U.S. financial conditions held at about the highest levels since before the worst financial crisis since the Great Depression as debt investors brushed off House Speaker John Boehner’s warning that America is on a “path” to defaulting on its debts.

USD Today: In default-risk market, investors weigh realities. – A U.S. default would be catastrophic to your portfolio but so would selling before a deal.

Bloomberg: – Hedge funds expand bets with most junk since ’08. – Hedge funds have amassed the greatest share of the $1.2 trillion U.S. junk-bond market since the credit crisis, raising concern bets with borrowed cash will accelerate losses when the Federal Reserve stops printing record amounts of money.

FT Adviser: – Emerging markets weather storm as sales data more upbeat. – Investors have started buying back into battered emerging market debt funds, as they surface from a storm that wiped at least 10 percent off most portfolios in a matter of weeks.

Kiplinger: – Why to buy emerging markets now. – Now, when developing markets are flat on their backs, is the time for contrarian investors to look closely at them.

Trustnet: – Bull market in bonds isn’t over yet, says Webb. – Investors will still be able to make capital gains in bonds over the next couple of years, providing they pick flexible funds, according to Roger Webb, manager of SWIP Strategic Bond.

About.com: – Can bonds predict the direction of the economy? – Bond market performance is generally being viewed as an indicator of economic conditions, but in reality it’s more accurate to say that it reflects investor expectation of future economic conditions six to 12 months out.

Barron’s: – Bond investors walk on wild side. – Michael Aneiro explains what you can gain – and lose – from “unconstrained” bond funds.

Trading Floor: – Three reasons why equities will beat bonds. – Whilst many analysts suggest you should be overweight bonds, Saxo Bank’s Head of Equity Research, Peter Garnry, disagrees. He thinks we are going to see the opposite, and that equities will be the ones to outperform bonds over the next couple of years.

April and May coupon UST issues under pressure.