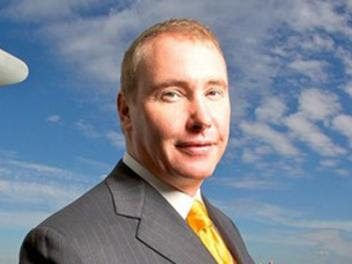 Jeff Gundlach’s monthly webcast can always be relied upon for a headline or two and this months is no exception. Gundlach says that the yield level on junk bonds is unusually low compared to long-term Treasuries – in fact by one measure he says junk bonds are “the most overvalued in history” versus 30-year Treasuries.”

Comparing junk bonds with 30 year treasuries is not a comparison you hear often, but Gundlach says he likes to keep tabs on the relationship between the two due to their similar volatility characteristics.

Gundlach notes that U.S. junk bonds have outperformed in recent years, with that market up 7% so far this year after being up 15.6% last year, and says “I have a feeling it’s going to mean-revert” sometime soon. “I don’t think it’s a good idea to overweight high-yield bonds today,” he says, comparing them to emerging-market corporate bonds that had an off year this year and could rebound more next year.

Still, he added, “I don’t really have a big issue with corporate bonds.” When it comes to credit quality, Gundlach says “probably at some point it will come back to haunt us” that high-yield covenant quality is weakening lately, but that bonds have some runway before any credit-related performance deterioration really kicks in.

You can check out the full webcast, with slides here.

Wealth Management: – U.S. Muni bond market contracts by most ever. – The U.S. municipal bond market shrank at a record pace in the third quarter, and the amount of bonds held by households, the market’s biggest investors, fell to the lowest level in nearly seven years, according to Federal Reserve data released on Monday.

WSJ: – Puerto Rico dips into cash to repay loan. – Puerto Rico last week repaid a $400 million short-term loan from Barclays by drawing on its pile of cash rather than by selling bonds, in the latest sign of the island’s travails funding itself.

CBS MoneyWatch: – Headlining bankruptcies don’t affect muni performance. – This year we have seen a fair share of headlines highlighting significant defaults on the municipal bonds of such cities as Detroit, Stockton, and San Bernardino. For many investors defaults such as these brought back memories of the Dec. 19, 2010, forecast by Meredith Whitney. Appearing on “60 Minutes,” she predicted that a tidal wave of defaults would occur in the municipal bond market in 2011: “You could see 50 sizeable defaults. Fifty to 100 sizeable defaults. More. This will amount to hundreds of billions of dollars’ worth of defaults.”

The Street: – Lesson from Detroit: Buy dividend aristocrats, not muni bonds. – One lesson from the Detroit bankruptcy is that anything a municipal bond can do, a stock can do much better, especially for those seeking income from their investments.

Learn Bonds: – The ABCs of BDCs. – Last week we discussed the basics of the high-yield bond market and how risk-tolerant investors might consider the space as a source for elevated income. This week I’d like to draw your attention to the business development company, or BDC, a rather niche corner of the equity market where income investors can find high yield.

WSJ: – Bill Gross’s Treasury holdings fall in November. – Bill Gross, who runs the world’s biggest bond fund, slightly dialed back exposure to U.S. Treasury bonds in November after increasing the holdings for two straight months. Mr. Gross’s cash allocation to Treasury bond holdings ticked down to 37% at the end of last month compared with 38% in October.

Market Oracle: – 10-Year U.S. Treasury note trades near 6%; If taper is for real. – The most important question for investors at this time is to determine how high interest rates will rise; if indeed the Fed’s artificial suppression of yields is truly about to end. To accomplish this we first must consider where yields last were outside of central bank debt monetization, a recession and the Eurozone debt crisis. Then, we need to factor in the increased risks to inflation and solvency, in order to arrive at an appropriate estimation for the level of interest rates during 2014.

Income Investing: – Junk-bond returns top 7% for 2013. – 2013 will be remembered as a pretty terrible year for bonds in general, with the exception of one category:  junk bonds. The average return across the high-yield market in 2013 to date just topped 7%, reaching 7.07%, per the latest reading on the Bank of America Merrill Lynch High Yield Master II Index.

FT: – The emerging risks of ticking time bonds. – The most sobering lesson of the global financial crisis was that developments expected to increase resilience – in that case, the “originate and distribute” model of finance – turned out to reduce it. Does a similar danger now threaten stability? Yes. The next round of global illiquidity might derive from foreign currency bonds of non-financial companies of emerging economies. The centre would be asset managers, not banks.

About.com: – 2014 bond market outlook. – While the bond market as a whole is unlikely to deliver much in the way of total return in 2014, there’s also no reason to hit the panic button. Here, we look at the various issues that could impact market performance in the year ahead.

MarketWatch: – Retooling your bond allocations for 2014. – In our December memo to clients I discussed the changes that are continuing to unfold in the fixed income markets and how it pertains to the various bond holdings in our portfolios.

Minyanville: – Is your multi-asset ETF ready for 2014? – Multi-asset ETFs have seen a great deal of inflows and momentum over the last several years. These ETFs run the gamut from portfolios with a broad mix of underlying securities to “fund of funds” that own a tight group of other diversified ETFs. The asset allocations can include stocks, bonds, commodities, and even alternative investments.

MarketWatch: – Here’s how the Fed’s taper problem could end up blowing bubbles: Deutsche Bank’s Reid. – Credit markets aren’t in a bubble right now, but closely-followed Deutsche Bank strategist Jim Reid says that could change by the end of 2014.

'Tis the season to buy Muni CEFs. There is a great opportunity to set up trades for the new year.