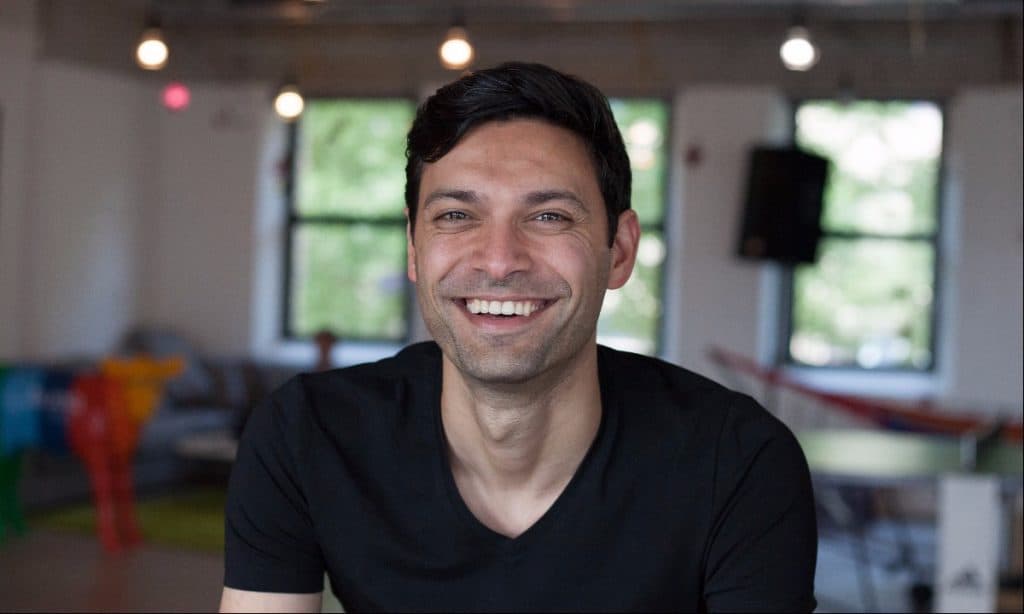 Not many people feel they were called to be a banker, but that’s the way Ali Niknam tells it.

The 38-year-old founder of a Dutch-based bank called bunq says: “A safe and secure society relies on a stable financial system. During the financial crisis, I knew people who couldn’t get a mortgage, or others who were forced to close businesses because they could not get credit.”

“Regulators saved traditional banks back in 2008, but they didn’t change them,” Niknam told LearnBonds in a phone interview. “Banking remains largely a monoculture, and biology teaches us that monocultures eventually get wiped out. We need diversity to get to a functional financial system. This job is a mission and a crusade.”

This vision of the apocalypse led Niknam (above) to launch his bank in 2015, after spending three years trying to convince Dutch banking authorities that his operation should be the first new lender to open its doors in the Netherlands for 35 years. So far, he has backed the bank with just over €50m of an IT fortune he amassed in his twenties.

The digital bank now trades in 30 European markets including Germany, France, Belgium, Ireland, Spain, Italy, and launched in the UK in September.

Its breadth of operations makes it comparable to challenger bank rivals such as the UK’s Revolut and Monzo, or Germany’s N26.

But on the raw numbers, it is a smaller business. Bunq posted an annual loss of €11m in 2018, compared to €9m the year before, according to its latest annual report. The bank will not disclose the number of account holders it has, but over that period the firm’s customer deposits more than doubled to €211m.

By contrast, Monzo, which has two million customers, reported that its losses jumped 54 per cent to £47.2m in the year to last February, but listed deposits at €716m (£624m).

But Niknam, a Canadian of Iranian descent, argues, if you look under the hood, his bank is a sustainable business.

Most digital banks are free to join and have attracted millions of customers in a few short years due to their ease of use and lower fees on features such as travel money.

However, only a fraction become premium customers, paying £12 a month or so for extra services such as home insurance and access to airport business lounges.

Also, few challenger bank’s personal account holders use it as their main account preferring to deposit their salaries in high street lenders. Analysts point out that this is a fundamental problem for neo-banks, because customer deposits are the bedrock of bank lending, which leads to profits.

“I want to run a healthy business, based on organic growth and making sustainable gross margins on the services that we sell,” says Niknam.

“Our users pay us a fee, because they feel we provide a service that adds value to their lives. The only way to build a sustainable business is to charge fees for services,” says the bank boss.

He adds that he is less worried than other digital banks about whether customers use his firm as their main account or not, because every account bunq opens instantly starts a clocking ticking against its monthly fee.

Niknam has clearly thought hard about his business model, which should come as no surprise since he started running firms at 16.

Niknam and his family moved to Gouda, in the north of the Netherlands, when he was seven. He was born in Canada, but as a toddler went back to live for five or six years in Iran, before coming to the Netherlands.

“My family were always very international,” says Niknam. “I may well move on from this country in a few years.” The bank boss speaks Farsi, Dutch, English and “a bit” of French and German.

Business and technology were the two things that dominated Niknam’s life as a child. As a teenager, he started an online shop in the mid-90s, where people would order computers from him, which he would assemble after school to be shipped off.

“At that time computers came in parts,” he says. “My job was to put them together for customers who did not have the technical ability to do so.”

He adds: “I have always been fascinated by computers. There are no limits to what you can create. Your imagination is the bar. If you can conceive it, you can create it.”

However, his business brain was also working hard. This was not something he did for pin money at the weekend. The business kept accounts, and was registered with the local chamber of commerce.

Niknam hit the big time in 2003 when he started TransIP at 22, which now offers digital services such as email and cloud services to two million small business across northern Europe in countries such as the Netherlands, Belgium, Denmark, Sweden and Switzerland.

The entrepreneur says: “We created an intuitive control panel for firms that lets them get their businesses on the web, and also manages that service for them.

“There is something about the web that fascinates me. When I created my first company web connection, and heard that ‘ping’, which meant the firm was now connected globally, it literally gave me goosebumps.”

In June, TransIP merged with Belgium rival Combell under the new name Team Blue, giving the business a $1bn valuation. Team Blue, which employs over 1,000 staff, said in September it expects to rack up sales of over €275m over the coming 12 months.

Niknam is on the board of Team Blue and is one of the three largest shareholders in the business, along with Combell founder and Team Blue chief executive Jonas Dhaenens, and private equity firm HG.

Niknam has ploughed much of the money he made from Team Blue into Bunq, investing €50.1m into the bank as its sole shareholder, according to the bank’s most recent annual report, including a €5.2m cash injection the first five months of 2019.

He says: “I was in the luxurious position to be able to decide whether I wanted to take on outside investors or not. I decided against that because I wanted to apply a super focus on the shape of the bank. Venture capital money often focuses on growing account holders, at the expense of other fundamentals.”

However, Niknam is reviewing whether the bank will now take on outside backing.

“We have had a lot of interest for investors,” he says. “We are currently defining what success looks like for us. We may then go out and look for investors who take the same view. But it may be that we decide to keep the existing structure.”

“I view bunq as a teenager, and in five years time it will be an adult and should be independent from me. Sooner or later it will break even, and will be able to operate without me having to deposit money in the business.”

Until then, the bank that Ali Niknam built ploughs a furrow he alone has fashioned.

Average working day: Starts work at 7.30am, going through his emails on his laptop. At 10am he has back-to-back meetings with various members of staff, lasting three to four hours. After that, he writes computer code and review code written by his team of programmers for two hours. He then has further meetings with his design and marketing team. Arrives back home between 10pm and 11pm.

First job: “At 14, I worked for somebody else assembling computers for sale, before going out on my own.”

What car do you drive: A Tesla, says he was the third person in the Netherlands to own one.

What company, other than your own, do you wish you had started?: “Apple. It turned computers into things people could understand. It gave ordinary people the potential to do creative things. Before Apple, you had to have a manual to run a computer. It made the machine intuitive, and did away with all that.”

Perfect day off: “I would take mine after meetings in Lisbon. I would wake up in a hotel by the sea. After grabbing a sandwich, I would head for a walk in the hills around the city, stopping somewhere to have some ham and cheese with red wine at lunch. In the evening, I would have dinner by the bay, chill out with friends and go clubbing.”