Apple Inc. is working on its next generation iPhone 8, also called ‘iPhone Edition’ in some quarters. The tech space is agog with rumors and leaks on what we can expect from the next iPhone. The iPhone 8 is not likely to make its debut until September but buyers can’t seem to hold their peace as we await the device. The reason for the huge interest in the iPhone 8 is not farfetched—to start with, the iPhone 8 will be the first iPhone to sport a massive change in design since the 2014 iPhone 6 and iPhone 6S.

Apple doesn’t usually make massive changes to the design of the iPhone – the firm is content to adopt a ‘don’t fix it if it is not broken’ approach. However, there has been endless chatter about how Apple’s iPhone sales volume is peaking. People think sales is slowing because newer models of the iPhone seem to only sport marginal improvements over the previous models.  Hence, Apple needs to roll out its innovative drum to unleash a radically different iPhone 8.

AlHasan Husni a graphic designer on Dribble might have created the iPhone mockup designs closest to what you can expect when Apple Inc. eventually unveils the device in September.  In his words, “the future of the iPhone could be here. Virtual home bar & fingerprint, Dark mode with curved OLED Screen & featuring the New way to access Multitasking View.”

Husni’s mockup features a bold design with a 5.8 inches AMOLED screen for shaper colors and a more real-life feel. The device will also sport a bezel-less/thin-bezel display that practically the phone’s full face. The device is also expected to have a curved edges that extends the screen real estate beyond the face of the device. Interestingly, some critics have hinted that the mockup looks weirdly similar to the design of Samsung’s Galaxy 8. 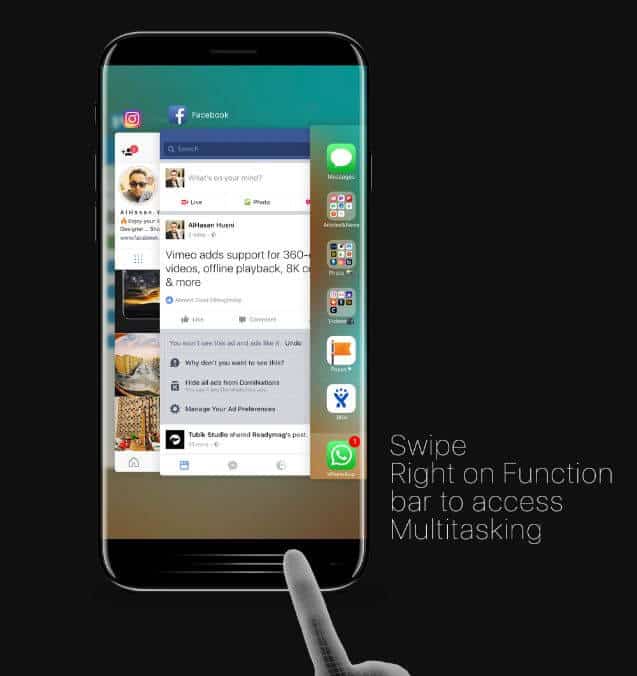 Husni’s mockup also suggests that Apple will discard the physical home button in the iPhone in line with previous leaks and rumors. The iPhone 8 will most likely have a virtual home bar with haptic feedback in order to provide more screen real estate. It also appears that Apple will embed the fingerprint scanner into the display of the device.

Some analysts have also suggested that the fingerprint sensor might be embedded in the curved side of the screen in order to enable fingerprint access when you pick up the phone without actually putting your thumb on a dedicated fingerprint scanner. The iPhone 8 might turn out to be a bit different from Husni’s mockup; yet, there’s no denying the fact that his design closely matches earlier iPhone 8 leaks.

Critics have vocally condemned Apple Inc. for losing its innovative edge especially with rivals such as Microsoft unleashing innovative devices such as the Surface Studio. However, Apple recently filed a patent for “enhanced face detection using depth information“, which it might embed in the iPhone 8. In simple terms, the patent could allow the iPhone 8 camera to capture depth information for enhanced facial recognition security. The patent could also provide the iPhone 8 with 3D sensing features for AR or VR.