In 2012, HHMI announced that it would seek to appoint 30 new HHMI investigators through a national competition. The competition was open to eligible applicants in 2012 and HHMI will select finalists in 2013. The initiative represents an additional, annual investment of approximately $200 million in basic biomedical research by the Institute… FY 2011 Form 990

Keep in mind though treasury rates have gone up recently, yields are still low. A few months ago lower rated 30-year corporate bonds were issued with yields less than 4% (like Campbell Soup A2 / BBB rated 3.8% coupon, 30-year bonds issued last August cusip: 134429AZ2 currently priced at $82.89 — issue price was $99.19.) Now several well rated bonds due in the late 2020s are offering yields above 4%.

In the following sections I will explore the direction of interest rates, and the potential for the HHMI bond prices to go lower if the 10-year treasury bounces back above 3% in the near-term. This is one good reason holding investors back. 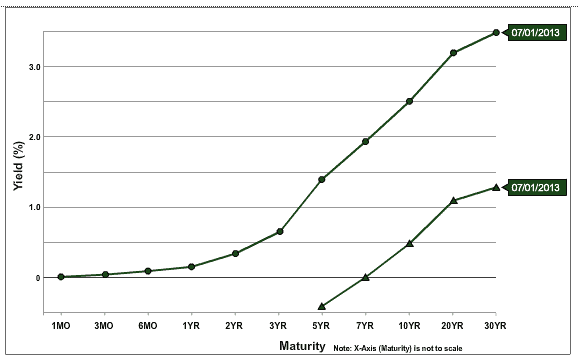 Twenty years ago the curve looked quite a bit different: 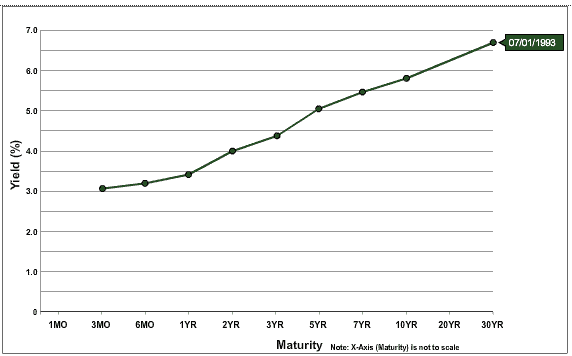 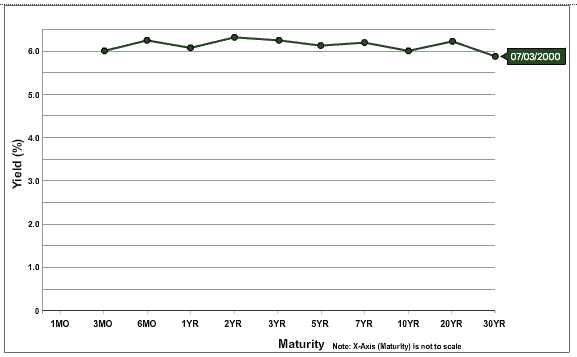 Though HHMI’s 10-year bonds look one way by today’s standards, they look much different by historic standards.

I hope you noticed the Harvard bonds in the list at the beginning. They make for an interesting comparison with HHMI’s new 10-year bonds. 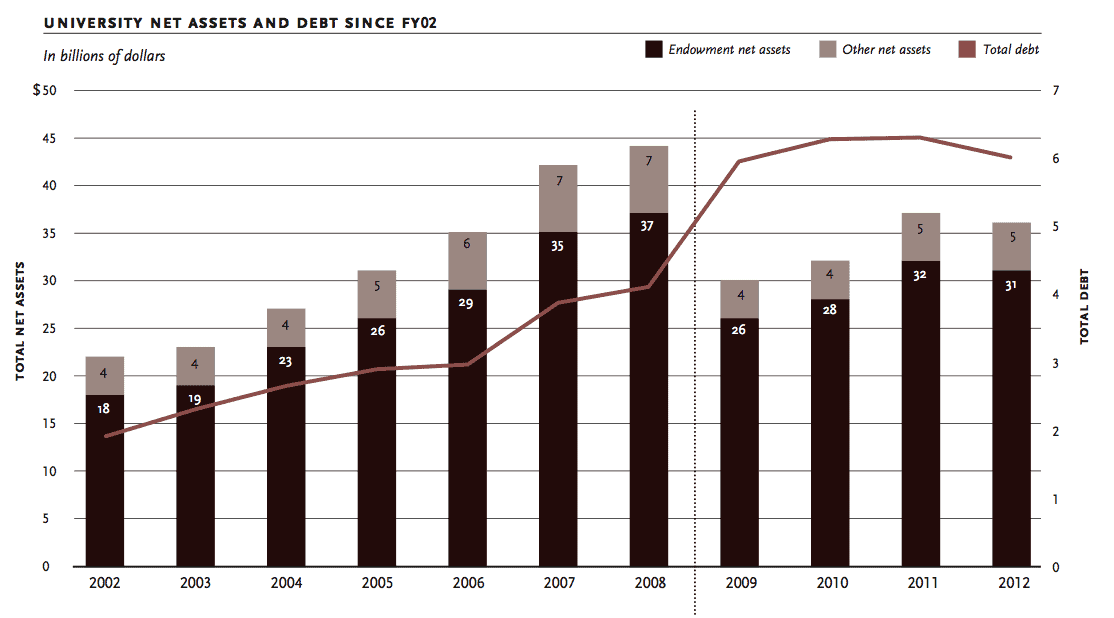 The University is seeking to limit net new debt over the next several years in order to preserve financial flexibility and protect against potential revenue pressures on the University’s budget.

From an investor’s standpoint HHMI remained very productive during a very difficult economic climate. Harvard being a larger, more complex institution seems to have been more stressed by the 08′ / 09′ turmoil, compared to MIT for instance: 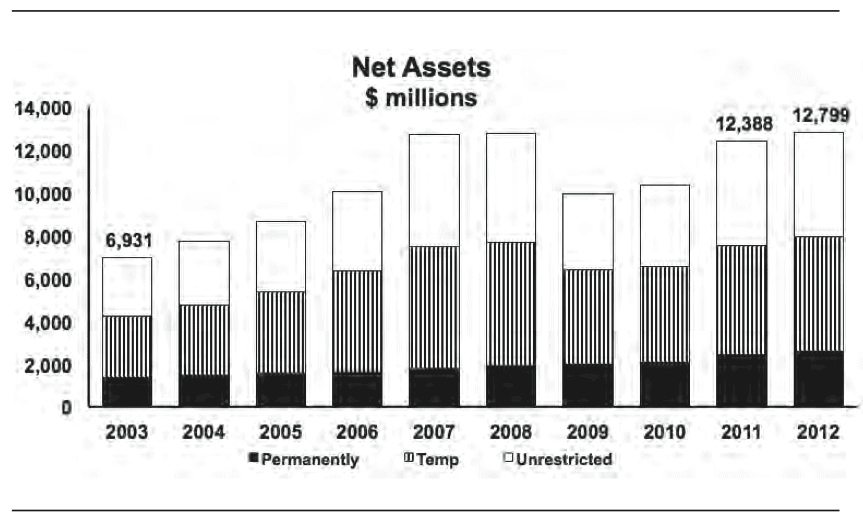 Keep in mind, “the bigger they are the harder they fall,” Harvard’s net assets dropped significantly while the university maintained its complex operations. Retrospectively all three of these top rated institutions, HHMI, MIT and Harvard weathered the 08′ / 09′ economic storm basically unscathed. Unlike massive failures, General Motors for instance.

Given the differences between Howard Hughes Medical Institute and university bonds, the new HHMI bonds could work to balance exposure to university debt and treasuries.

Very few philanthropists are able to form as strong an institution as Howard Hughes Medical Institute, today the notion of limiting philanthropy to a few years after a donor has died has gained some traction. Large philanthropists worry about the potential for their donations to be limited, instead of being used to the fullest. Though a recent article about the full expenditure of a large gift to a Brooklyn Hospital, originally intended to generate income and preserve the original donation, shows the difficulty some have with managing charitable dollars — a large amount of the donation to the hospital went to fund medical malpractice, not exactly the cause the donors intended.

Of course HHMI worked with substantially more, and serves as a model for would be large philanthropists. HHMI’s net assets exceed the individual purchasing power parity of exactly 90 countries and territories. Let’s look at a brief history of how HHMI became one of the world’s wealthiest medical institutions.

HHMI sold the Hughes Aircraft company to General Motors in the mid 1980s for over $5B.

In 1989 GM and HHMI negotiated so the medical institute could sell the majority of its GM class H shares by the mid 1990s. GM merged parts of Hughes  with an electronics subsidiary that eventually became DirectTV, while remnants of Hughes Aircraft were eventually bought by Raytheon and Boeing. Today the $5.2B HHMI received from GM would be $11.2B.

Since 2003, the Institute has provided $7 billion in direct support for research and science education. 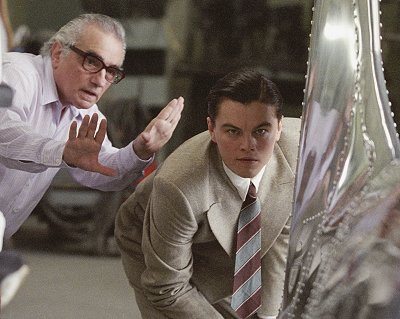 If you saw Martin Scorsese’s film, The Aviator (2004) it should come as no surprise Howard Hughes was embarking on something ambitious, again. When he died he was still individually worth a significant fraction of the entire U.S. gross national product.

Hughes’ father invented a type of drill bit around 1908 that allowed for much faster drilling of oil, Howard Hughes Jr. inherited his father’s company around the age of 19. Around that time Hughes reportedly drafted a will calling for the creation of a medical research laboratory.

“Late in 1953, Hughes created the medical institute that bears his name and decided to fund its work through the profits of the Hughes Aircraft Company. In signing the documents to create HHMI on December 17, 1953, Hughes pursued a characteristically bold course of action: he wished to create an institute committed to basic research, to probe into “the genesis of life itself.” The HHMI charter states:

The primary purpose and objective of the Howard Hughes Medical Institute shall be the promotion of human knowledge within the field of the basic sciences (principally the field of medical research and medical education) and the effective application thereof for the benefit of mankind.“

Rather than exhausting the Hughes fortune HHMI’s move to raise funds through this large bond offering appears logical and manageable. The institute spent $914M in FY 2012 including $105M on administration and interest expenses. In FY 2011 HHMI generated $1.2B in investment income, so you can see how this $1.2B bond offering has the potential to strengthen HHMI’s efforts, without immediately dragging down the endowment.

Do HHMI Bonds Belong In Your Bond Ladder?

Those who believe the rates are ultimately going much higher might watch the bonds for a longer term, or start smaller opening positions. While investors who have income generated and ready to be allocated to bonds might consider balancing their higher yield bonds with Aaa rated income.

HHMI is one of the world’s top medical research institutions, however investors should determine whether $35 per bond is worth the price. Especially given the price could go down as rates go up. Keep in mind currently $100,500 in these bonds should generate just $3,500 a year, if their yield went to 4% then it would be closer to $90,000 in HHMI 2023 3.5% coupon bonds to generate $3,500. Consider what $3,500 is to your own annual budget — clearly these bonds are not the catalyst for great profits, however they offer one possible investment for those seeking to preserve capital.

Here is an example of small allocations to HHMI bonds in different size portfolios:

Keep in mind rates can go up, the price on these bonds could fall, however at some point bonds such as the HHMI bonds may hit a favorable yield for your purposes (allocation to Aaa rated income.)

Currently investors who are concerned about inflation could consider allocating the HHMI income to a mix of growth stock funds and inflation protected income funds. You can see the income is not sizable, however investors can work to use the income to increase the overall yield.

Patience is a Virtue

The investor who currently makes $10,000 fixed income per year from their bonds, who buys 10 new HHMI bonds would increase their total income by 3.5%, or $350. That investor would be allocating an amount equal to their total annual bond income to HHMI’s new bonds.

HHMI supports talented medical & science professionals in pursuit of the frontiers of medicine. The institute is not perfect, however the challenges HHMI tackles are dismissed as impossible by many others — the new bonds will move with the market, they have a make whole call, and should currently keep up with inflation. These bonds are certainly worth using as a reference point for judging other 10-year bonds in today’s low interest rate environment.

Disclaimer: This article is not a recommendation to buy or sell. Please consult a financial adviser to determine proper allocations, if any to individual bonds. I am long HHMI 3.5% 2023 bonds.