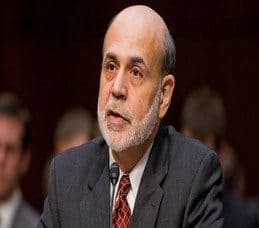 When it comes to changes in the shape of the yield curve, there is no bigger factor driving these changes than the Federal Reserve.  However, the actions of the Federal Reserve affect short term interest rates differently than they do long term interest rates.  With an understanding of how both the short and the long end of the yield curve may move when the Fed acts, the astute investor has the opportunity to earn profits and avoid losses.

How the Short End of the Curve Moves

Most directly, the Fed influences the short end of the yield curve when:

At the very front of the yield curve sits the Fed funds rate, which is the rate at which banks lend to each other overnight.  Since the Fed is targeting this rate directly, it’s easy to see why there is basically a very direct relationship between Fed monetary policy and very short term interest rates.

While the Fed traditionally does not target the interest rate on “longer dated” short term debt (like the rates on one month to 1 year treasuries), there is a tight relationship between the Fed Funds rate and these rates. Over these short periods of time, factors such as uncertainty over future inflation don’t come into play. Additionally, as these securities are extremely liquid and won’t lose much value if rates rise, there is minimal risk premium that goes into these rates.

However, there is also another reason.

Many financial institutions engage in a carry trade, which involves borrowing at short-term rates and investing the money at slightly higher longer term rates. In particular, they borrow at the Fed Funds rate (overnight) and invest in short-term treasuries.

Let’s pretend for the moment that the fed funds rate is 4% (significantly higher than where it is currently).  That is the rate at which banks can borrow overnight in order to continue to hold their portfolio of short term treasuries.  Next lets say that the interest rate they were earning on a 2 year treasury dropped from 4.5% to 3.5%.  Under this scenario the bank would be earning less on the 2 year treasury they hold in their portfolio (3.5%), than they are paying on the money they have borrowed to hold that security (4%).  This is called “negative carry” and because this is a losing proposition for a financial institution, interest rates on short term treasuries maintain a very tight correlation with the Fed Funds rate, and almost never drop below it.

How the Long End of the Curve Moves

The further out in time you go, the less correlation there is between interest rate moves on short term treasuries and interest rate moves on long term treasuries.  Concerns about inflation, and the added premium that investors demand in compensation for the additional uncertainty about future rates, play a much larger role in long term securities than they do in short term securities.

However, this does not mean that the Fed is powerless in influencing longer term interest rates.  By increasing or decreasing the supply of money in the economy they are not only affecting the Fed funds rate, but they are also affecting the market’s future inflation expectations.  This in turn affects the rate investors are willing to accept on longer term debt.  If the market feels that the Fed is acting aggressively against inflation, then long term rates should fall.  Conversely if Investors feel that the Fed is not acting aggressively enough against inflation, then long term rates should rise.

In 1999 we were at the height of the internet bubble.  Then chairman of the Fed Alan Greenspan worried that the economy was overheating and began an aggressive campaign of Fed Funds rate increases taking the Fed Funds rate from around 4.5% to around 6.5%.  You can see the increase of the Fed funds rate during that time in the graph below: 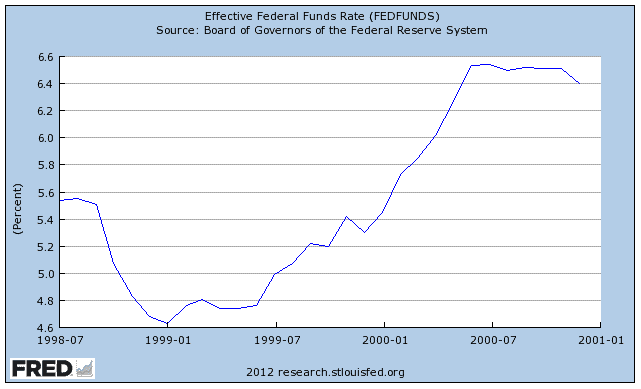 In March of 2000, short-term rates rose in response to the Fed’s action. However, long-term rates had fallen to the point where the 30 year bond paid almost one percent less interest than the 7 year. The longer end of the yield curve had inverted as investors worried that the Fed was acting too aggressively, and would push the economy into a recession. This would in turn cause the FED to dramatically lower rates in the future to try and bring the economy out of the recession. Bond investors were right and that is a exactly what happened. 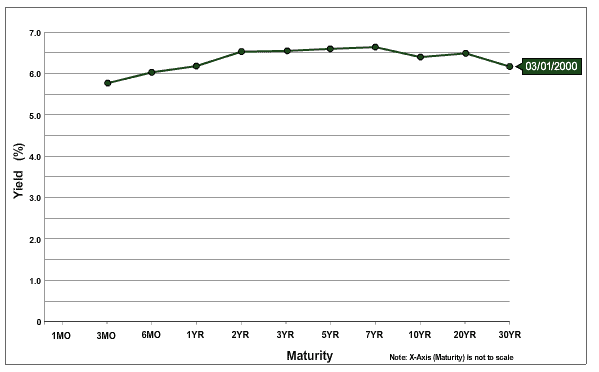 Have a question about the yield curve that we did not answer?  Let us know in the comments section.