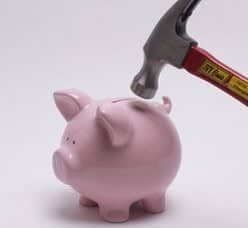 Seth J. Masters and Ding Liu from asset management company AllianceBernstein have modeled a range of possible outcomes for how the bond market will react, when the Fed finally begins to scale back the level of bond purchases it makes as part of its monetary stimulus program.

The upshot is, the impact to bonds is likely to be much less than many investors fear. I’d implore you to read the whole article to get a better idea of how bonds will react to the different scenarios.

But it begs the question, why do you own bonds in the first place? Most private investors hold bonds to provide stability, and diversity against equity-market risk. With short-term interest rates near zero, bonds have lost much of their income benefit.

But the diversification benefit of bonds remains as true today as it did in 1693 when the first perpetual bond was issued by the Bank of England. With the stock market testing new highs, investors should be holding bonds to cushion the impact, should the stock market retrace some of its recent gains.

The risk is not that bonds will get hit when the Fed begins to scale back the level of bond purchases it makes, it’s that investors will dump bonds in the ensuing panic, leaving their portfolios dangerously exposed to the volatility of the equity market.

PIMCO: – Bond market viewpoints. – What is priced into the bond market in terms of its outlook for the Federal Reserve? Does the increase in interest rates sufficiently reflect the market’s perceived policy shifts?

WSJ: – Fed debates what’s most effective: Bond buys or promises on rate. – Federal Reserve officials gathering in Jackson Hole, Wyo., this week with academics, private bank economists and others will ponder a question that will influence Fed decisions in the coming months: Which of its novel monetary tools are doing the most for the economy?

Learn Bonds: – High on high-yield. – High-yield bonds, or “junk bonds” as they’re also known, are often given a wide pass by non-institutional investors either because they don’t know much about them, or because they’re believed to be risky investments. Much like pit bulls, high-yield bonds have an undeservedly poor reputation.

Trustnet: – How I’m protecting my fund against an equity/bond sell-off. – Equities and bonds will continue to be highly correlated for the foreseeable future, according to Darwin’s David Jane, who says investors must look further afield to protect their capital.

Barron’s: – Muni closed-end funds are trading at big discounts. – If you’re predisposed to municipal bonds, be aware the average discount on closed-end funds is steep enough to approximate a full year’s yield.

YourMoney.com: – Are bond investors really doomed? – Investors are fleeing the bond market, but they could be missing a trick, according to JP Morgan Asset Management’s Nicholas Gartside.

ETF Trends: – Treasury ETFs rebound as yield surge may be overdone. – Treasury ETFs are rebounding after a violent sell-off that has pushed bullish sentiment on bonds to the lowest level in over two years.

IndexUniverse: – Bond ETF outflows spike as rates rise. – Investors have been pulling money out of the bond market at a near-record pace this month amid strengthening views that the Federal Reserve, as it suggested in May, is indeed likely to soon begin ending the extraordinary period of quantitative easing that began when the economy fell apart in 2008.

Money News: – Bill Fleckenstein: Bond market could experience ‘train wreck’. – The bond market may be in big trouble, but we won’t know for sure until we see how it reacts to a pullback by the Federal Reserve from its plans to taper quantitative easing (QE), says Bill Fleckenstein, president of Fleckenstein Capital.

The Street: – Doug Kass: Why I am buying bonds. – While I believe that the inevitable move of yields is higher, the move to higher interest rates will not likely be in a straight line, and there will be trading opportunities in the interim when bonds can be rented.

Trustnet: – Bond bubble will be deflated gently, says Webb. – Investors shouldn’t fear a dramatic sell-off in the bond market despite the volatility over the summer, according to Roger Webb, manager of the SWIP Strategic Bond fund, who says that Bernanke is capable of withdrawing the stimulus slowly.

Barron’s: – Muni funds shed another $2.1 billion in latest week. – Municipal bond mutual funds and exchange-traded funds lost another $2.1 billion to investor withdrawals in the week ended Wednesday, per the latest Lipper data. It marks the 13th straight week of net outflows, with 10 of the past 12 weekly outflows topping the billion-dollar mark.

Barron’s: – Taper fears could drag revenue. – Taper fears continue to chase investors away from fixed income. That weakness in the bond market will take a toll on revenues generated by the asset managers Legg Mason and Franklin Resources.

ETF Trends: – Build America bond ETFs bit by multiple factors. – With 10-year Treasury yields up 43.4% in the past 90 days, it is not surprising that investors are pulling money from bond funds. Earlier this week, ConvergEx noted that investors have yanked $3.5 billion from bond ETFs over the past month.

FT: – Bank bond issues soar in US but flag in Europe. – The diverging fortunes of US and European banks have been thrown into sharp relief as US banks issued record numbers of bonds this year while volumes in Europe plumbed fresh lows.

Hawkinvest: – These higher-yielding investments could be spring-loaded with upside. – There are a number of oversold stocks, closed-end funds and ETFs that offer generous yields. The picks below could rebound significantly in the coming days and weeks once the Fed offers the markets clarity.