Tesla Motors debuted on the U.S. equity markets in 2010 and for the next 5 years it was a Wall Street darling. It’s an exciting company with an infectious vision that people love but is Tesla really all that valuable? CEO Elon Musk is doing what many considered impossible when he first began working at Tesla.  He’s built 3 fully electric vehicles and each one has been met with applause and overwhelming demand.  He’s just about to introduce a mainstream, affordable version of his cars and that is expected to be a game changer. The introduction of the Model 3 is just a month away – but in the mean time, the company has come under some scrutiny and there are concerns about the value of the stock.  It’s been on a downward tear lately.

Elon Musk has done the impossible in taking the first American automobile firm public since Ford IPOed in 1956. From an IPO price of $17 per share, Tesla currently sports a 52-week high of $286.65, which suggests that you’ll have an incredible 1,586% gains if you had bought Tesla on the day of its IPO. Tesla has been a Wall Street darling for the first five years of its IPO but the performance of the stock in the year to date period suggests that Tesla might be losing its allure in the market.

How much is Tesla stock worth?

Last Friday, the shares of Tesla Motors closed with 1.55% gains at $190.34 after the stock has struggled to stay afloat as the bears and bulls fight it out from Monday through Thursday. In the year-to-date period, the shares of Tesla have lost a massive 20.7% as shown in the chart below. 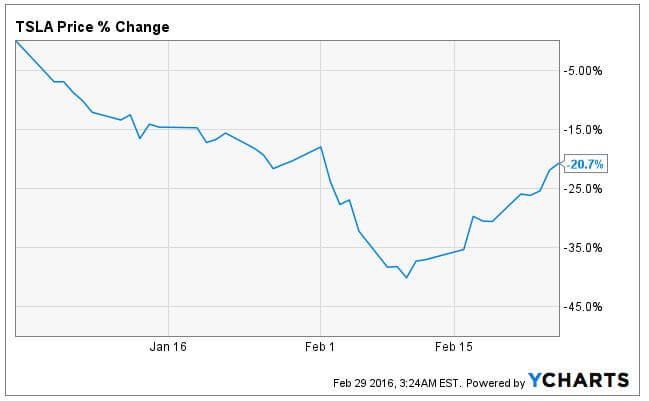 A 5% drop in the trading price is traditionally considered a pullback in the equity markets and bulls often expect a bounce/rally after a pullback. A 10% drop in the trading price raises much bigger concerns because it suggests that the stock is in a correction – casual bulls often leave this stock at this point and only core bulls maintain their positions. However, when a stock losses 20% in its trading price within 8 weeks of trading, investors will naturally start to revisit the reasons behind their bullish thesis on the stock.

The decline in the shares of Tesla is particularly worrisome. The stock has mostly been on a downward plunge since the markets opened this year. 2016 has not started well for the company. Tesla has great products, the demand for its cars is much more than the supply, but Tesla being a great company that doesn’t necessarily make it a great stock.

Here’s what investors and analysts think