Tesla Motors Inc builds premium luxury EVs like the Roadster, the Model S and the Model X. The firm’s brand positioning as a luxury EV maker won’t change until the lower priced Model 3 reaches the market. By the virtue of the high price tag of Tesla’s cars, one would assume their drivers would treat them with extra care. However, Teslas often make the list of wrecked exotic cars even though they are outfitted with the best driver-assist systems.

A quick look into the world of wrecked exotic cars shows a Model S with massive rear end damage and a Model X with one of its falcon wings torn off the body.

Based on the results of a recent poll it appears Tesla’s cars don’t hold their value once they been involved in a crash.

How much would you buy this Model S with “minor dents”?

A Tesla Motors Model S owner in California (Bay Area) has listed his car on Craiglist with a $35,000 price tag. The car seems to have been involved in a massive rear-end accident as seen in the pictures above. The listing reads “Black 2013 Tesla Model S sedan (85 KWh battery) for sale works perfectly but has body damage. Because of these minor dents and dings you can finally afford a Tesla!”

The owner says the Model S has 89,896 miles on it, it has a salvage title, but it is “perfectly legal to drive”. In his words, “it was in a crash but has been repaired except for the obvious. The hatchback opens and closes and latches, and both taillights work, so it’s perfectly legal to drive. All the doors work, the airbags and seats and seatbelts are fine, and it drives perfectly!”

In another instance, a Model X P90D in Lisle, Illinois lost a huge chunk of its value after the owner drove the car with the doors extended. A caption of the pictures of the “doorless” Model X reads “Forgot that the door was open when driving out of own garage. Nobody hurt. Spotted at repair shop.”   See pictures below. 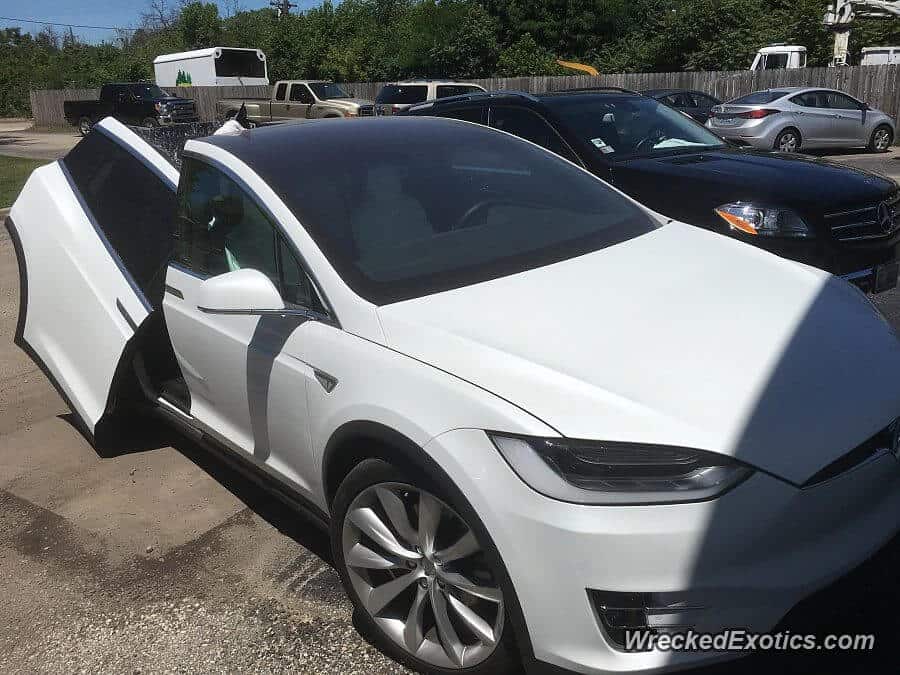 In the case Model X with the torn door, the owner is not planning to sell his car but many folks are interested in knowing the repair costs of fixing the door. The falcon wing doors were of the parts that caused Tesla Motors the biggest delays in the development of the Model X.

Now, it would be interesting to see how much Tesla would charge to fix the door.  If you intend to buy a Model S or Model X, you should try to remember that the cars are low-volume luxury cars and that the repair costs might be on the high side.